The Great Mississippi Flood of 1993


The Mississippi is flooding again. The last time it was this bad was 1993, when I was a grunt reporter, and the City Desk sent me down a number of times to report on the disaster. Even after nearly a quarter century, thinking of the flood conjures up unforgettable images: the Mississippi, swollen and wide, racing along almost at the base of the Arch in St. Louis. Whole towns turning out in places like Grafton and Alton trying to keep their sandbag levees intact. Townsfolk keeping their wallets in Baggies.
And a solitary stone house, which photographer Al Podgorski — who snapped the photo above — and I came upon in Saint Genevieve, Missouri.  An extraordinary sight: a peninsula of sandbags, jutting into the swollen river, protecting a single stone structure. I wrote about the efforts to save the house, and ended up on the stand bag line, trying to keep the wall in place. It was scary. I remember watching water trickling through the cracks between the sandbags thinking, "A guy could die here." But the wall held. None of the historic homes in Saint Genevieve were seriously damaged by the flood.

STE. GENEVIEVE, Mo. — This house north of town is called the Rock House because of its solid stone construction. Built in 1805, it is the oldest stone dwelling in Missouri.
The house has seen a lot of history in its nearly two centuries of existence. It was, for a while, home to a slave trader. It was, for a while, a brothel.
It should be under water up to its second floor, and about 50 feet into the swollen Mississippi River.
But it's not.
Walk up to the house, and the mind almost rejects what the eye is seeing. The house is surrounded on three sides by the river, kept out by a fragile sandbag and plastic levee.
The house also is called the Myers house, for the owner, Frank Myers, and it was his determination, along with his family's, that has kept the house safe.
"When he had resigned himself to fate, it was really when a lot of the family said 'No, we have to save it,' " says Stuart Johnson, Myers' son-in-law, who took over when Myers went into the hospital for a coronary bypass last week. (Ask anyone whether the fight to save the house put Myers in the hospital and the answer is always: "It didn't help.")
They have been fighting the river since July 4, and how it will work out is anyone's guess. On Friday, the river crested at Ste. Genevieve, a town of 4,500 about 50 miles south of St. Louis, at 49.6 feet, the highest point ever.
Around the Rock House, water seeps out of the bottom of the levee in sheets, forming a considerable creek at the base, where two pumps throw it back into the river.
The family has been aided by hundreds of volunteers, from the local girls basketball team, to the National Guard, to prisoners from the Farmington Correctional Facility, who endeared themselves by being concerned about getting the floors muddy.
As with much of the efforts to fight the flood, there is a factor of human nobility — or perhaps irrationality — in the fight to keep the river out of the Rock House. The walls are 3 feet of stone; the river probably wouldn't sweep the house away. Why not just give up and put all that effort into cleaning up afterward?
"I'll give up when the water brings me out the back door," says Johnson. "When I'm swimming out the back door, then I'll decide what to do next.

Sandbaggers Get To the Nitty-Gritty 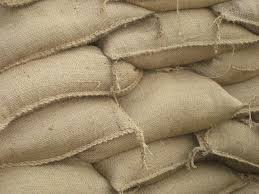 Sandbags have a rhythm, a mantra. They are too heavy, and you need too many, for it to be otherwise.
In creation, they require four people, as any volunteer can tell you, in something close to a nursery rhyme:
One person holds it.
One person fills it.
One person ties it.
One person stacks it.
The parking lot at Valley High School here looked like a factory producing brown and green pillows.   Tens of thousands of 40-pound sandbags, piled about 3 feet high on wooden pallets, filled most of the area. Around the perimeter, volunteers worked feverishly, making more.
Grab any sandbag team here and you find a cross-section of Midwesterners who left their lives, temporarily, to drive for hours to do back-breaking work in the hot sun for free to help total strangers.
Mary Boyer, from Vincennes, Ind., held an empty bag. Ron Lyon, from Caledonia, Ohio, took a shovel and filled it — three shovelfuls to the bag. Nancy Hendrixson, also from Vincennes, tied it, and Marilyn Anderson, from Olney, Ill., did the stacking.
"We brought a van load of goods donated by the town and dropped them off at the Salvation Army, then came to sandbag" said Hendrixson, explaining how they got there.
"It's a chance to help out," said Lyon. "To give somebody else a break, to step into the breach."
Jim Runstrom walked up. He had just driven 10 hours from Waterford, Mich. He asked if he could fill in for anybody, and Anderson let him take over the stacking.
"I've been seeing these people on TV every day, and they look like they need help," he said. "So I came down."
—Originally published in the Sun-Times, Aug. 9, 1993
Posted by Neil Steinberg at 12:00 AM