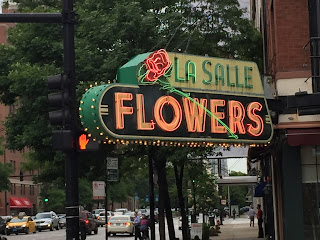 The first day of summer.
Hooray.
That didn't sound very convincing, did it?
I wish I could whole-heartedly laud Beach Boys songs, ballgames, picnics, something warm and fun and scented with woodsmoke.
But I don't have the stomach for it. One season melting into the next.
Maybe it's Trump; he is becoming normalized, isn't he? I never thought so many people would debase themselves so much for so little. I'll grant Trump this: I knew he was a fraud. But man, he's a good fraud. Effective. He lays out the trap and people jostle like piglets at a sow to be the next to fall in.
Maybe it's something else. Maybe  I'm just distracted by the uncertain future of the Sun-Times, rattling like dice in a cup. First it seemed we would be snatched up by Tronc, the corporate entity that owns the Tribune and a bunch of other newspapers. I was resigned to that — at least it would be something different; worst come to worst, we'd have to go work in the big box of Freedom Center.
Then Monday Edwin Eisendrath, the former alderman—to general astonishment—put in a realistic bid of $15 million, fronted by a bunch of unions. Not bad on its face -- I've been in a union for most of my 30 years at the newspaper. Unions have their flaws, but sure beat the hell out of no unions.
This development got me wondering if I had ever written about Eisendrath — I am not always kind, and people bear grudges.
Luckily, just this once, when he was running for governor against Rod Blagojevich. A good sign right there. I seem to have gummed him but inflicted no lasting wound. I hope.
I also read in Robert Feder's column that, if the sale goes through, we'll all be working at 20 N. Racine (assuming I'm not fired, that is). I called up Google Map—about a mile from Union Station, only a couple blocks more than the current building. So that's something to feel good about.
I included the second item, as a stroll down coping-with-Islamic-terror lane.  And yes, I considered that now, on my hobby blog, I had my chance to do what I criticized the paper for not doing, to manfully publish the offending cartoon and let the chips fall where they may. And no, I'm not doing it. I have enough to worry about. Unlike the president, I can cop to it when I'm being hypocritical. It's a kind of freedom.

Democratic gubernatorial challenger Edwin Eisendrath has failed so far to entice Gov. Blagojevich to debate him on the issues—the governor no doubt figuring, "Heck, I've got $15 million in the kitty, why bother with 10th-grade civics class formalities?"
Still, Eisendrath is not without options. I heard that he is being urged to stage a mock debate, perhaps against an Elvis impersonator, as the governor is a notorious Elvis fan.
A funny idea. But could it possibly take place in the realm of dull reality? I placed a call to Eisendrath, who admitted that the concept is being pressed upon him.
"I have two things to say about this," he said. "[Blagojevich] ain't nothing but a hound dog, and he's turning our state into Heartbreak Hotel."
I wanted to leave it at that, but Eisendrath, who is not exactly Mr. Jolly (in a debate, I'd worry about Elvis winning), had to set the record straight.
"I won't debate an Elvis impersonator—I might debate an empty chair piled with cash," he said. "This stuff is so serious—the state's broke—I don't want to make too much light of it."
Why not? Crying won't fix anything.

ALMOST ALL THE NEWS FIT TO PRINT

"But I've never even seen the drawing!" my wife said, standing in the kitchen, reading about the latest paroxysm of Islamic rage over some cartoons showing the Prophet Muhammad.
Don't hold your breath, Honey. With the notable exception of the Philadelphia Inquirer, the American media has gone and hid in the basement when it comes to the biggest story to roil international waters this year. A Danish cartoon has set off the Muslim world, embassies are being burned, people being killed. But we can't show you the image. Out of respect. For the rioters . . . er, for their faith.
That's a bunch of bull. This isn't about respect—the media thumbs its nose at religion all the time. This is about fear. We're afraid, afraid to print the cartoons. We don't want our houses burned down.
Since when did "deeply held" religious beliefs dictate what goes in the paper? Any daily newspaper is a stick in the eye of one or more of the world's religions, from the astrology pages to the bra ads. The very existence of a Sunday paper is an affront to the idea of the Christian Sabbath as a day of rest.
Consider this: Jewish tradition also bans depicting images of God—you don't see human forms in most synagogues—but that doesn't keep every paper in the country from printing cartoons showing a big, bearded God, because Jews aren't going to start turning over automobiles in front of your newspaper office.
It's easy to claim respect. No newspaper editorial says, "We don't want the threat and the hassle." I thought the New York Times' explanation in an editorial Tuesday morning was particularly disingenuous and prim. They rationalized not printing the cartoon this way:
"That seems a reasonable choice for news organizations that usually refrain from gratuitous assaults on religious symbols, especially since the cartoons are so easy to describe in words."
What image isn't? "A woman kneeling, arms spread, over a student shot at Kent State." "A pile of bodies, including children, in a ditch at My Lai." Spike those photos!
And "gratuitous," in my dictionary, is defined as "uncalled for, lacking good reason." I understand that the initial printing of the cartoons might have been exactly that.
But what about now? Half the world's irate about a drawing. I'd say that's reason aplenty. But no, we can't show it to you, because then they'd be upset at us, too.
Guess what? They already are. And were, last week and last year and 10 years ago. So now the Islamic street—to a small but very real degree—is editing your daily newspapers and censoring your TV (CNN blurred the images, as if they were child porn).
Believe me—no one will be placated by our restraint, no hearts won by our timidity. Surrender today begets more surrender tomorrow. This cartoon is a lost battle—instead of them becoming more like us, we are becoming more like them. The fear that rules their lives is beginning to rule ours.
—Originally published in the Sun-Times, Feb. 8, 2006
Posted by Neil Steinberg at 12:00 AM