CARBONDALE — “Happy eclipse, guys!” a young woman on a bicycle called out to complete strangers on a busy Saturday night in the heart of this bustling downstate college town. Happiness seemed a central theme — alongside science, commerce and partying — as tens of thousands of visitors converged for what has been dubbed the Great American Eclipse, the intercession of the clockwork cosmos into our disordered daily doings.
Happy, that is, if the weather holds, an increasingly dicey proposition as clouds moved in Sunday afternoon.
“There are more ways we can get clouds here than not,” said Jim Cantore, a meteorologist and host for The Weather Channel, arriving on the Southern Illinois University campus to do a broadcast, fretting about nearby storm systems. “I’m worried about a few clouds. That would be a disaster.” 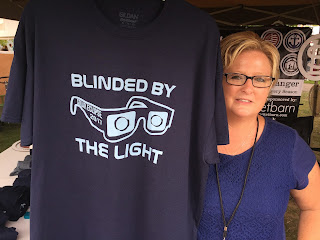