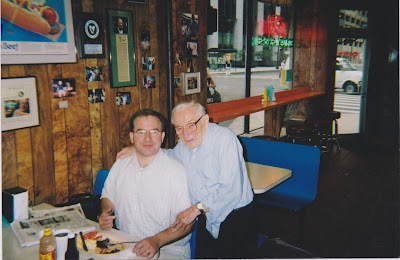 The Chicago Hot Dog Fest is this weekend, Saturday and Sunday, 11 a.m. to 9 p.m. at the Chicago History Museum, Stockton and LaSalle.
So much discussion of franks involves the encased meat itself, as well as—far too often lately—rehashing of the Ketchup, Condiment of Controversy Conundrum, which I promise I will never address again. It's just getting old. The Reader took that circus pony for another trot around the ring this week.
There's more to hot dogs than hot dogs, or condiments. There is, for example, hot dog stands and the often colorful individuals who own them. None more colorful or individual than the great Harry Heftman, of Harry's Hot Dogs at Franklin and Randolph, whom I celebrated on his 100th birthday.

'You make one person happy," said Harry Heftman, 100 years old today, "it comes back to you."
The result of a lifetime of dispensing happiness—and hot dogs—turned out Friday to honor Heftman at his small snack shop on the corner of Randolph and Franklin.
Well-wishers ranged from great-grandson Nathan Heftman, 2, who sat solemnly dipping french fries in ketchup, to Mayor Richard M. Daley, who was a sixth-grader at Nativity Grammar School when Heftman opened the Little Snack Shop on the same spot in 1954, changing its name to Harry's Hot Dogs in 1982.
"My father used to come here," said Daley, after enjoying a hot dog and a slice of cake.
"The janitors' union used to be next door," said Harry Heftman, adding that Richard J. Daley ate there twice.
Harry's sons, Ron and Chuck Heftman, his daughter Lila Ardell, as well as their children, great-grandson Nathan, and various friends, media and well-wishers, including a senior vice president from Vienna Beef, gathered at the famous hot dog stand.
"It's always been part of all of our lives," said Chuck Heftman. "This store put us all through college."
"All the grandsons worked at Harry's," said Larry Heftman, who began at 12 and credits working there with inspiring him to study law.
"This was harder than I wanted to work every day," explained Larry, who eventually graduated from Harvard Law School and became a commercial litigator in downtown Chicago. "We learned hard work from my grandfather."
To illustrate how well Harry instilled that ethos, his workers continued to serve hot dogs to customers who jammed themselves into the restaurant, even as the mayor held forth for the knot of jockeying TV cameras.
"Anybody want a hot dog?" asked Marcus Mallett, working the food line.

The past lives, and sells hot dogs

March 15, 1909, was a Monday.
At the Auditorium Theater on Congress Parkway, the touring Ziegfeld Follies of 1908 was winding up its final week. Tickets started at 25 cents and rose to $1.
At Marshall Field & Co., men's shoes in black and tan started at $2.45 and cost as much as $3.45. At Mandel Brothers, shirts that normally cost $2 were selling for 85 cents.
At 3 a.m., a locomotive carrying Jack Johnson, the heavyweight champion of the world, "the only colored man who ever held that title," as the Chicago Daily News put it, arrived at Union Station.
Despite the early hour, Johnson was met by a throng of Chicagoans.
Johnson had defeated Canadian Tommy Burns the previous December after chasing him all over the world, and was now hot on the heels of the retired heavyweight champion.
"I'm after Jim Jeffries now and I'm going to New York in a couple of days to see him," Johnson told the crowd. "I can lick him and he knows it. All I want is to get him in the ring with me."
March 15, 1909, was before World War I, before the Titanic was built. There are few tangible reminders of it in the city—the Auditorium Theater that hosted the Ziegfeld Follies still stands. And Harry Heftman is still standing too, still selling hot dogs.
"Lookin' good, Harry! Lookin' good!" exuded Marcus Frisby, who was out of work when Harry hired him, on the spot, nearly 20 years ago.
"I love him; good man," said Frisby, who has a hot dog stand of his own now at 47th and Calumet.
Harry was born March 15, 1909, not in Chicago, but in Sojmy, a village in Hungary. He came here in 1921 at the age of 12, which means he arrived in this city before the Wrigley Building was completed, and lived with his family on the West Side, by Division and Western.
Harry likes people to leave his place happy—even the two robbers who once stuck him up.
"I said, 'Put the guns down, I'll give you all the money and you'll walk out happy,' and that's what they did," recalled Harry, wearing a bright yellow cardigan and basking in the attention at his packed restaurant.
One drawback of turning 100 is that people ask your secret of longevity, but with Harry, there was no need—his physician, Dr. Jerry Handler, stopped by, patting him affectionately on the arm. They have known each other for 67 years; Dr. Handler, 81, went to work for Harry at the age of 14, delivering fruit.
"He's always been a very healthy person," said Dr. Handler. "Extremely oriented toward his family."
Good habits? I asked.
"Not a runner, not a drinker," Dr. Handler agreed.
I said I didn't think jogging was as harmful as drinking.
"I didn't mean that type of running," Dr. Handler explained.
After Harry moved into the building, he invited the Showmen's League of America to buy it, which they did.
"The restaurant carried all the costs of the building for the past 50 years—taxes, insurance, maintenance," said Bill Johnson, past president of the Showmen's League, the union for carnival workers.
The building is coming down by May, to make a plaza for the skyscraper next door. Harry's Hot Dogs enters the past on April 10, when it closes forever. And Harry Heftman will occupy himself with friends and family. I asked him if, at 100, he feels old.
"No," he said, smiling.

Speaking of bad habits. A friend upbraided me for enjoying an occasional cigar, prompting me to invoke Redd Foxx's famous quip about healthy living:
Health nuts are going to feel stupid someday, lying in hospitals, dying of nothing.