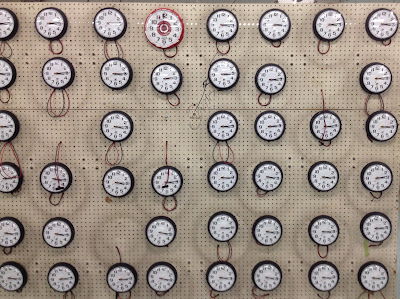 Is it me? Or did Daylight Saving Time seem to end extra late this year? It didn't, still the first Sunday in November, just like last year and the decade before. Maybe a flashback from prior to that, when it was the last Sunday in October.
Change is hard, as this column from 2009 recounts. And just a reminder, since it can be hard to get your head around. The amount of daylight doesn't actually change. What we do, besides getting an extra hour to sleep, is shift the framework of time we use, so that dawn comes earlier. Sunrise was 7:27 a.m. Saturday, but 6:28 Sunday, after the time change. It was done for a variety of reasons, but the most convincing was so that kids wouldn't have to go to school in the dark.
Don't worry, you'll get used to it. Or not.

efforts to extend health coverage to all U.S. citizens. Yet we can't get rid of the penny. We are happy to let the government run the military, trust in its competence, content to place the lives of our sons and daughters, husbands and wives, in its care. Yet running some banks is beyond federal abilities.
I don't understand people—we're so strange, so inconsistent when it comes to change. Huge issues fly past us—a debt that will burden generations unborn is laid upon our shoulders without a murmur. But we get rattled twice a year by the moral implications of Daylight Savings Time. The great engines of daily journalism can cough and sputter without raising alarm outside of those who are actually drawing a salary from newspapers. But just try to suggest we shift over to the metric system and listen to the general public howl of complaint and concern.
My theory? It's BECAUSE we can't bear to grapple with the big stuff that we make such a fuss over the small stuff. Unable to forestall death, we distract ourselves by slathering our wrinkles with cream.

became Macy's, my heart sorrowed along with everyone else's for the long-time Chicago merchandising icon, and raged against the brash Manhattan interloper, which chucked our beloved green comfort object, apparently, to save money on shopping bags.
That is, until a clutch of change-adverse Chicagoans started picketing the State Street store, demanding it go back to being "Field's."
"Save it for Darfur," I grumbled, abruptly welcoming Macy's into my heart. Now that the traditional adjustment period has passed, I can actually say, "Meet me at Macy's" without having to once again go through all five Kubler-Ross stages of grief (Must I? Oh all right: denial, anger, bargaining, depression and acceptance).
So while I'd have happily called the Sears Tower the Sears Tower for the rest of my life, I cannot pretend that calling it the "Willis Tower" is a rend in the time/space continuum.
Alas, this is not a universal opinion. My electronic village square at Facebook tells me that groups such as "Chicagoans Against Willis Tower" (34,253 members) and "I Refuse to Refer to the Sears Tower as the Willis Tower" (6,292 members) and at least 20 others have sprung up to lobby for the status quo.
Of course these are groups that assemble with a few keystrokes—I bet if you asked them to gather in an actual physical location and donate a dollar, you'd end up with nine people.
Plus, their easily expressed call to the ramparts is ridiculous—"Chicagoans, let's take a stand! The Sears Tower will forever overlook Chicago." Yeah, right.
First, it's hypocritical. I am absolutely certain that if the Willis Group approached any of those Sears Tower boosters on Facebook and offered to pay a quarter of their rent in return for calling their abode "The Old Willis Place," that every single one of them would leap at the deal. I sure would.
Second, it's futile. Question: How many aggrieved e-mails from Chicago will it take to persuade the Willis Group in London to NOT rename the Sears Tower? Answer: none, because a dozen or a million are the same in these cases. If you're going to lobby pointlessly in a time-wasting exercise of appealing to the deaf, then send your e-mails to Chinese Prime Minister Wen Jiabao and demand that he free enslaved Tibet. At least your empty exercise is for a noble cause.
The Berghoff is gone. Marshall Field's

is gone. Meigs Field is gone. Now the Sears Tower is gone, and why not? When was the last time you went to a Sears store anyway? If you really care about the Sears name, go to a Sears right now and buy a socket wrench set. Otherwise, stop crying; it's embarrassing.