The March for Our Lives was inspirational, as people across the country, mostly young, gathered Saturday to refute the culture of death that our leaders have allowed to take hold of our country.

While it was certainly historic, it is also a reminder that change is seldom easy, and that common people ALWAYS have had to win basic human conditions under which to live by protest and action.
Sunday happens to be the anniversary of one of the most horrendous workplace tragedies in history, the Triangle Shirtwaist Fire in New York City. Many of the safety changes in place today—the sort of standards threatened by the Trump administration—were put in place in the wake of the fire.
I wrote this piece to commemorate its centennial. Note the third paragraph from the end, and remember that promising to enact change, and actually changing, are two very different things.

At 3:40 p.m. today, Chicago time, it will be exactly 100 years to the minute since someone tossed a cigarette into a bin of scrap cloth on the 8th floor of the Asch Building on New York's Lower East Side, touching off what for the last century has been known as the Triangle Shirtwaist Fire. 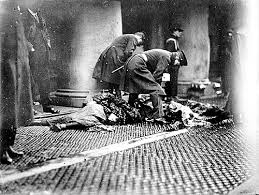 It was a Saturday, so only 600 of the usual 1,000 employees—500 women and girls and 100 men—were working. Their 12-hour shift over, they had put their street clothes on, collected their pay envelopes—$6 a week—and were waiting for the bell. Ten minutes later the place would have been empty.
The fire raced through the eighth floor, fed by piles of lint, linen hanging on wires from the ceiling and oil stored in the open to keep the machines running. It spread to the ninth and 10th floors, sending panicked workers running to the two fire escapes. One was anchored to the outside of the building, down into the alley. The other was inside.
The building was 11 years old, considered both "modern"—it was served by four elevators —as well as "fireproof." But the ladders between the levels of the outside escape were missing—those who fled there couldn't get down. And the doors to the inside fire escape were locked, to prevent theft.
The first fire engine company to respond arrived in minutes, firemen dodging what at first they thought were bolts of cloth being tossed from the burning building.
They weren't bolts of cloth, but workers leaping to escape the flames. The firemen raced to set up their ladders, but they needn't have hurried—their ladders fell 20 feet short.
The streets filled with onlookers watching in horror as those trapped above were squeezed between burning and falling to death. Most were teenage girls from immigrant families—Italians, Russians, Germans; most "could barely speak English." The weight of the women on the back fire escape tore it from its moorings and sent it crashing into the alley, killing everyone on it.
The crowd on the street shouted "don't jump!" but the seamstresses had little choice.
Five girls watched from one window as the firemen tried to work a ladder to them but couldn't reach. "They leaped together," the New York Times reported the next day, "clinging to each other, with fire streaming back from their hair and dresses."
A 13-year-old girl hung by her fingertips for three minutes from a 10th-floor ledge before dropping to her death.
There was heroism. Three of the four elevator operators kept at their posts, making repeated runs to the smoky eighth floor, returning packed with survivors. When one operator finally fled screaming "fire!" into the street, a New York University law student took over and made four more trips before the flames destroyed the shaft.
It was all over in half an hour—146 workers had died. Examining the charred bodies, the New York City coroner was seen "sobbing like a child." There had been warnings aplenty, which the factory owners ignored.
"This is just the calamity I have been predicting," said the city's fire chief. "Look around everywhere; nowhere will you find fire escapes. . . . Only last Friday a manufacturer's association met on Wall Street to oppose my plan [for a] sprinkler system, as well as the additional escapes."
That night at the morgue, another hellish scene unfolded as bereaved relatives gathered to identify loved ones, "the sobbing and shrieking mothers and wives and frantic fathers and husbands of those who had not been accounted for." Many victims, burned beyond recognition, were identified only by the heel of a shoe or the scar on a knee.
The next day, the police at the morgue turned away many curious New Yorkers: well-dressed businessmen and groups of schoolgirls who came to "see the sights."
Ironically, the year before, the International Ladies Garment Workers had struck the Triangle, demanding higher wages and better working conditions, the first mass strike by women in the United States. The owners promised to meet their demands, and the strike ended. No changes were made, of course—instead, one by one, those involved in the union were fired, and so were not there that fatal day, but lived to press for the reforms that came in the wake of the disaster.
The Asch Building was indeed fireproof—largely undamaged by the fire, it stands today, part of New York University.
Triangle owners Max Blanck and Isaac Harris were charged with manslaughter but acquitted. Their insurance company compensated them handsomely for their loss.