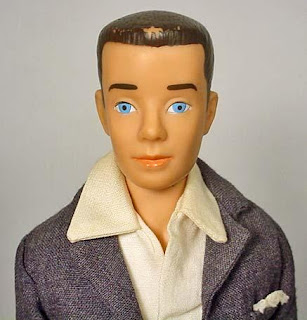 One benefit of the steadily fluttering calendar pages is that Facebook serves up columns from years past, based on whatever today's date happens to be.
Another is that time's effacing hand scrubs clean, allowing me to experience my own writing with the fresh eyes of any other reader. They're both suited to my biases—they should be, I wrote them—yet also new discoveries.
I would envy anyone who thought to view the Ken doll's 50th birthday through the lens of that bard of lumpen middle age, Philip Larkin. That the writer was me, well, age is not without its compensations.

Ken, you're 50? My God! Welcome to the club, old bean. I reached the big 5-O last June. Where does the time go? I hope you finally scored with Barbie and didn't just spend the past half century squiring her from prom to mall in her pink Mustang, only to be shown the gate of that Malibu Dream House as soon as G.I. Joe stops by. Barbie seems the type.
That would be hard to take: 50 years since Mattel introduced you, 50 years dwelling in the shadow of the world's biggest clothes horse, the doll world's Stedman Graham.
But then accepting the disappointments of life ("the unbeatable slow machine that brings you what you'll get," as British poet Philip Larkin calls it) is what 50 is all about.
Or least our 50. Everyone's 50 is different. Barack Obama's 50—coming this August means being president of the United States, which must soften the sting somewhat.
Maybe not so different. President or poet or plastic doll, the cumulative story of your life drains the bitterness out of 50, or should, as it dawns on you: This Is It, good and bad.
At 50, you begin to notice the husks of used years, discarded behind you. "I have started to say/'A quarter of a century'/Or 'thirty years back' " Larkin writes. "It makes me breathless/It's like falling and recovering."
Not to me. To me, there is a wonder to gazing back that far. Thirty years ago? 1981—the Green Bay Press-Gazette. Approaching each story as if it were a difficult ring puzzle, shaking it. Parading my 21-year-old self by the disinterested, flanneled Wisconsin lovelies.
Bleh, I'm happier now, doing this. There are two ways to view doing the same thing for 30 years. 1) You can wonder why you haven't gotten it right yet or 2) You can realize: Gee, I've been doing this for so long; I must like it.
Work strikes me as essential to a tolerable 50, Ken, old sport. I know you've been through many professions—airline pilot, actor, whatever. I suppose that makes for a rich life. Me, I find myself contemplating that Noel Coward line, "Work is more fun than fun."
At 32, work for Larkin was a day job he pictured as a toad and resented. "Why should I let the toad work/Squat on my life?"
By 50, employment had changed for him. "Toad Revisited," begins, "Walking around in the park/Should feel better than work" and ends, "Give me your arm, old toad/Help me down Cemetery Road."
At 50, old age, while still distant, has taken out the instruments of torture and displayed them before you. Yet somehow, this doesn't bring fear so much as focus. There is no point in getting all worked up over nothing, the way younger people do. Happiness studies reveal a U-bend in life—you're pretty happy in your 20s, get more miserable as you age, bottoming out at about 45—on average, though I can vouch for that—and then progress steadily upward in contentment until 70-year-olds report they're happier than 30-year-olds. It turns out that wrinkles aren't so bad after all.
Not an issue for you, Ken, is it? You seem a permanent—what?—26? I remember 26, struggling, rudderless; I think being forever stuck at that age would drive a fellow mad.
In "On Being Twenty-six," Larkin deems it the age "when deftness disappears," a fallen state requiring 54 somber lines to relate ("A last charred smile, a clawed Crustacean hatred, blackened pride...") while 25 years later, he dispatches 50 in 15 breezy lines: "The view is fine from fifty/Experienced climbers say" happily trodding downhill toward death.
Ah death. Not a concern for you either, Ken old squire. Nor, to be frank, for me.
I've read enough Seneca to take the sting out of thoughts of being dead—you don't go around bewailing that you weren't here 200 years ago. Why beat yourself up because 200 years from now you won't be here either? That seems an ungrateful response to the gift of ever being here at all.
Besides, 50 isn't as old as it once was. In "What Fifty Said," Robert Frost says "Now I am old" contrasting, how, when young he "went to school to age to learn the past," but "now that I am old my teachers are the young ... I go to school to youth to learn the future."
That's the ticket, Ken. How you view what's to come is usually a good thermometer of how old you really are—if the future is a menacing blur, a scary fracture from the comfortable and decent past, then you aren't seeing it properly and need to look again.
No rush. Robert Frost was 50 in 1924, meaning he had only another 39 years left to write poetry. I'd sign up for that. As for you, Ken, old chum, well, maybe it's time to give Barbie another go. To yearn for something, to try, despite past failure and slight hope of success, is not too far from being young again. You've been at it this long. Why quit now?