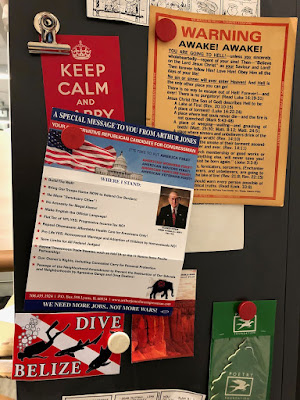 The past, the past, what do we do with it? Push it down and it bobs back up.
I was cleaning my desk at home—a walnut roll-top, cubbyholes and odd drawers and secret compartments, bought when I was 14 with five years worth of paper route savings. It's big: the entire Oxford English Dictionary fits on top with room to spare. The thing tends to accumulate junk. I was re-arranging piles of files when I came across a creme colored envelope. Inside, an invitation to my high school commencement.
"Wednesday evening, June fourteenth. Nineteen hundred and seventy-eight..."
Where did that come from? It didn't sit there, unnoticed, for 40 years? Did it? I hope not.
I tucked the invite away and pushed onward with my clean-up.
Hanging from the bulletin board, a Congressional candidate's flyer. Nothing is more disposable than campaign literature after the election is over, but this, well, I just couldn't throw away. I took it down to admire anew.
"A SPECIAL MESSAGE TO YOU FROM ARTHUR JONES" it blared. "YOUR CONSERVATIVE REPUBLICAN CANDIDATE FOR CONGRESSMAN."
The Nazi, if you recall, or alleged Nazi, if you're feeling charitable. The guy who throws birthday parties for Hitler.
A flag, of course and a photo of the U.S. Capital.
"WHERE I STAND:" and a dozen bullet points.
Guess which is first? C'mon, guess!
No, not "Make English the Official Language!" — because nothing imperils the greatness of a country like having more than one language spoken there. That's fifth. Though I would argue that propping up your native tongue and defending its supposed purity is worse than un-American, it's French. They're big on that.
Not "No Amnesty for Illegal Aliens!" That's fourth. What a handy word, "illegal"—the bigot's friend, the open gate through which a truckload of fear and hate is driven. The fig leaf hiding—in the mind of the bigot—his obscene shame.
Enough preface. Drumroll please. Arthur Jones' Numero Uno—whoops, where are my manners? That's Spanish. And Italian. The Number One reason he felt he should be elected:
"Build The Wall!"
Of course it is.  Both obvious and demanding explanation.
Why would a Holocaust-denying, immigrant-hating, anti-Semitic wack job like Jones care about building Trump's Wall? Because he's concerned with stemming crime and the flow of drugs? That's what Trump has been tweet-blasting for days.