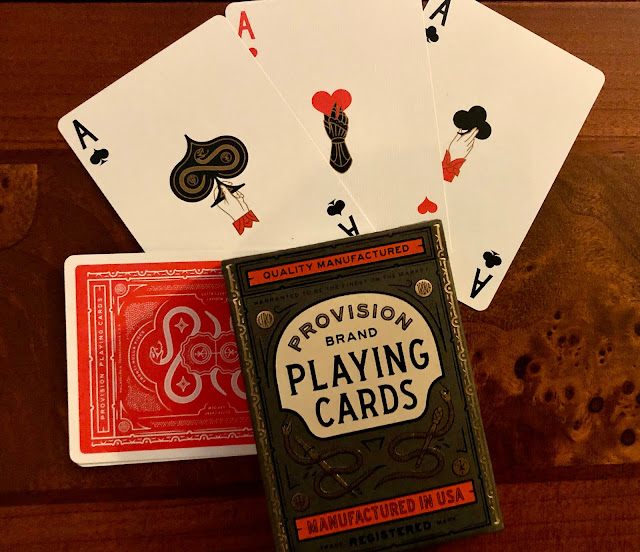 This story was impoverished, somewhat, by having to make it fit into the paper. I could only hint at just how fascinating Jonathan Bayme is, nor the world of whimsey he's creating around theory11: they put on shows in New York City, and go that extra mile, such as tucking hidden scavenger-hunt type games into their products, in one instance for those who thought to pull apart the boxes the cards come in. Let's put it like this, I plan to write a future post about his stationery. 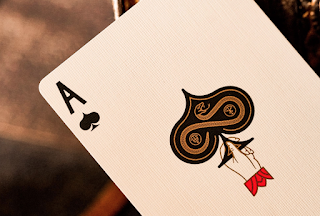 But I was happy to get this in the paper, a column whose main point is: "Look at these cards."

Playing cards are not hard to find. Almost every household has a few decks. We have seven just in two drawers in the coffee table in our living room: three Bicycle Standard, one unopened; two with pictures of kitties, one in 3-D; two souvenir decks (Nashville, New Orleans) and a football-shaped deck, a favor from some long-ago birthday party. I’m sure I could hunt up more.
That’s plenty, since I never play cards or think about cards.
Until recently.
An ad popped up on Facebook for Provision Brand Playing Cards by theory11, showing an elegant, gold and orange trimmed box, prompting a thought I’ve never had before nor imagined possible: 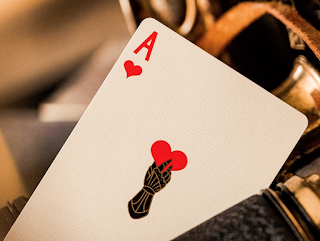 “What beautiful playing cards. I want those cards.”
I clicked on the link, and marveled at a picture of an ace of hearts, the heart being held by a knight’s gauntlet. It was both new and old, different yet familiar.
“Our original intention was to create cards for magicians,” said Jonathan Bayme, CEO and founder of theory11. “We were doing instructional videos for magic on the web.”
The goal was to “make magic look cool and modern and relevant,” which is not easy.
“People still associate magic with cheesy, hokey silks and canes and top hats,” said Bayme. “We thought: How do we combat that? What if we use tools like playing cards, which look cheesy, with pictures of baby angels on the back. They don’t look sophisticated and modern.”