They'll be here soon—are you ready? 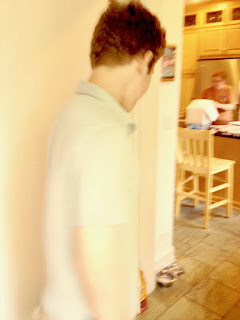 The boys are coming home Wednesday!
I can hardly wait.
Although my enthusiasm is tempered with a certain ... sense of ... ah ... caution.  A pause, to remind myself. It's been a few months. Adjustments are probably prudent. Calibrations, in the whirligig of words that is me.
They are full grown adults now, used to living on their own. In silent apartments full of text books. I have to let them settle in, adjust to being under their parents' roof once again. I should tread gingerly, and not try to  mess things up, the way I often do, by, you know, saying stuff to them.
What kind of stuff? Hard to predict, before the fact. Prior to the offensive words actually being articulated. Then the problem is all too clear. Sometimes the culprit is the most innocuous expression of goodwill, the most ordinary cliched greeting or farewell.

I was looking over unpublished bits and pieces tucked away on the blog, and came across this exchange, taken from life this past summer as my youngest was going out the door one morning. I believe it stands on its own without need for further explanation:
"Go get 'em!" I said, in what I imagined was a tone of  carefree bonhomie.
"Go get who?" he replied, clearly annoyed.
"Umm, whoever needs to be gotten," I said, struggling.
"I'm an intern," he said, incredulous, almost angry. "There's nobody needs to be gotten."
"Alright then," I said, forcing a smile. "Have a good time doing whatever it is you're going to do."
And he was gone.