Sahara in the Texas Sky 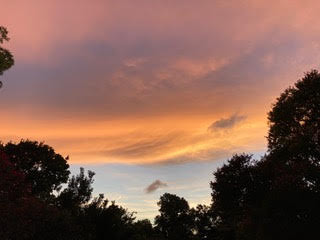 When my good friend Snezana was a child in Borovo Naselje, Croatia, she vividly recalls seeing a film of red dust on her balcony one day and her mother telling her “it came from Africa.” Snezana has been on the lookout for this red dust ever since. This past Thursday I sent her photos of a blindingly pink and surreal Austin sunset during yet another one of my COVID walkabouts, and her response was “Sahara in the Texas sky.” I had no idea what she meant, so I looked it up. As many of you know, a cloud of dust from the Sahara Desert has been projected by trade winds — winds that blow straight towards the equator — over 5,000 miles from the world’s largest hot desert (roughly the size of the United States) and this cloud is now doing its thing above Texas and other southern states. According to the National Weather Service the tiny dust particles scatter the sun’s rays at dusk and dawn, which accounts for the stunning sunset I was compelled to share with my friend.
When I called her a smarty pants for knowing why, from Chicago, my Austin sunset was so special she said “I perk up when they talk about stuff like that on the radio. I never knew before that it provided nutrients to the marine life. What a planet!” I’ll have you know that Snezana is a brilliant and hilarious person but the last word I’d ever use to describe her is perky. Elegant, understated, sublime, low-key, quietly powerful, yes. Perky, no. It made me unreasonably happy to hear her use such excited language. 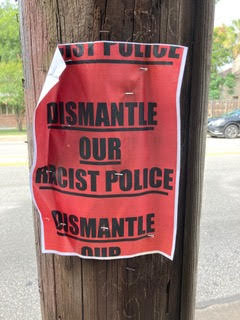 This COVID crisis and the incredibly sad and scary uptick in cases in the obliviously irresponsible state of Texas I currently call home has me rocking and reeling. Not in that good way that the hundreds of teens at Pong Fest in Spicewood (just outside of Austin) gleefully swapping germs must have felt while they were doing so last weekend, but in that “how can I adjust to this new normal of irreverent souls killing others with wild abandon?” way. In the incredible confusion that is coming and going for many of us as we live through a plague, I absolutely cling to any and all moments of pleasure, such as experiencing a new image of my dear Snezana.
Likewise, I have seen other friends and family members with fresh eyes since this crisis started. A couple of friends and I did an exercise together on Zoom called Authentic Movement that is described on its website as “a mindful movement exploration between a mover and a witness which encourages the development of consciousness.” As I watched one of my closest friends Debi move and express herself in a raw and unselfconscious manner on a little screen I usually reserve for Facebook and Netflix, I saw a side of her that I had never seen, and felt closer to her than ever. When several friends and I attended a yoga class on Zoom with my very first yoga teacher (from 1999), Shabad Kaur Khalsa of Spirit Rising Yoga in Chicago, my friends Debi, Laura Rose, Lynda and I shared a deep bonding experience that blew us all away. Zoom screens offer a strange intimacy that we may not have felt during less-present face to face interactions.
A couple nights ago I hopped into House Party, an app that lets friends jump into virtual rooms together any time, day or night. When I get an alert, for example, that “Julz is in the house” I can hop right in and say hi to her, our faces in little squares. Others can join us, or we can lock the room. I joined Julz that night and it was as though she was sitting on a bench at the park, like when we were kids, and I just happened to walk by and join her. That night her sister Kim hopped in too, and we had a powerful conversation of women witnessing and showing up for each other that would not have happened pre-pandemic awareness of the immediacy of life. We’ve always needed each other and now we are not afraid to say it. 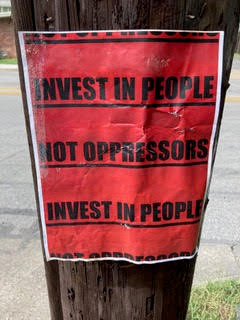 I have found other moments of deep contentment that come from being present, such as the one I shared in my EGD post Snail Eyeball at the beginning of all of this where I was able to capture a photo of a little eye peering at me when I had stopped to rest. If I had not been sitting still for such a long period of time in solitude, tired from the luxury of having time to walk miles and miles in the Texas sunshine, I might have missed that tiny black eye arching towards me. I would not have noticed the greenish smudge of slime under the picnic table had I been in normal Caren mode. Pre-COVID I was running myself much too quickly and I didn’t even realize it. I fancied myself chill. After all, wasn’t I the yoga and meditation teacher at a fancy spa? Wasn't I the sensible psychotherapist helping clients find themselves? Well yes, but now I can see how far away from mindful I really was. Staying sober from alcohol this whole time has also helped greatly — no fuzziness, no hangovers, no drama.
Pre-COVID I was constantly distracted with all of the movies I wanted to see (sometimes I’d go to one a day) at local trendy theaters, with getting to clients' homes and even driving 25 miles in one direction to see one of them (I am never doing that again), with grabbing yet another cup of coffee on the run and sipping it as I diligently drove from place to place to get things done. Solitude and introspection have brought me to a screeching halt and I am grateful. I will do everything I can to stay out of the rat race as it was and practice a more sane and enjoyable way of life that I heretofore had not mastered.
Today I walked nearly 8 miles and went from feeling positively unnerved by my impending move that’s coming up in a few days, during skyrocketing cases of COVID here in Austin, to calm, grounded and closer to fine. During this walk I spent a good amount of time in silence and also had conversations along the way with mentors and friends on FaceTime and Zoom. A sweetheart from my young adult days Diz and I have reconnected and laughed our butts off during a FaceTime call. I also noticed signs hanging from telephone poles reminding me of the ardent work ahead to do my part to end racist oppression, bathed my feet in a waterfall, and sat under a bridge. 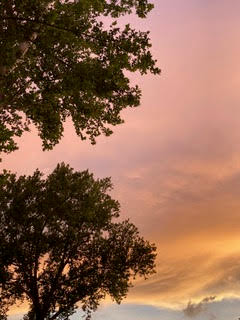 A few weeks ago I saw a water moccasin glide though the water under that same bridge. Would I have even known we have these terrifying and magnificent creatures so close by if a pandemic had not rendered me neighborhood-bound? I am not happy for this fatal virus among us. I am dismayed at the lack of intelligence and reason of non-mask-wearing anti-distancers, and beyond angry when I try to listen to what they feel is reason. All I hear is “I don’t care about protecting the lives of vulnerable people.” I am unbelievably scared, even panic-stricken, at times when I think about lives that have been lost and lives that will be lost.
Some of you may remember my beloved landlord Angelo from the last place I lived in Chicago before moving to Austin? I told you of him in my second EGD post called Texas Recollection back on April 18. I shared that he and his wife Eleftheria were the kind of landlords one happily paid to be allowed to live in their peaceful abode. I am deeply saddened to tell you that we lost Angelo to this virus. I had written that if I could have rewound time that day (when I knew he was in hospice care but did not know he had died), Angelo’s wife Eleftheria would finally be able to give me the potted jasmine tree she’d be saving for years that was to be a gift at my wedding (something she always told me, but I never did get married). Angelo would be all scrubbed up in a fine suit at my wedding (had it occurred) and have a dance with me. Now that Angelo is gone perhaps it’s not too much to hope that Eleftheria may still give me that tree one day and I will believe, despite the realities of a pandemic and post-pandemic world, that all is well.
Posted by Neil Steinberg at 12:00 AM