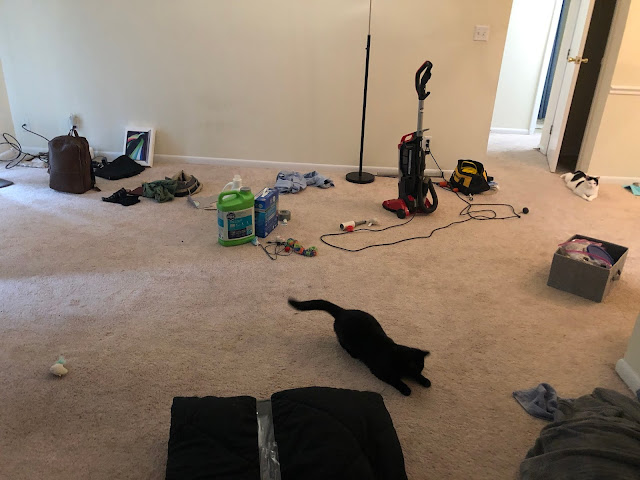 "I'm glad we decided to work Saturday," I said Monday, humping yet another bag of trash out of my son's Charlottesville apartment and toward the complex's dumpsters, 100 yards away. "If we hadn't, we'd be overwhelmed. Now we're just whelmed."
It was pointed out to me that the last word isn't a word. I promised I would check at the first opportunity, suspecting that "overwhelmed" is what etymologists call an "unpaired word"—a word that doesn't exist without their negative (or positive) prefixes. We become "disabled" but not "abled."
Three days and nearly 800 miles later, back at my home office, I checked my Oxford English Dictionary. Wrong. "Whelm" is parsed for a full column and a half. "1. intr To overturn, capsize. obs." with a variety of related meanings. "To cover completely with water or other fluid so as to ruin or destroy."
So in a sense, "overwhelm" is redundant, as "whelm" seems to serve nicely. "To engulf or bear down like a flood, storm, avalanche, etc; hence to involve in destruction or ruin" such as the challenge of condensing the contents of a student apartment into the back of a Honda Odyssey.
Indeed, many terms which seem to the untrained eye like unpaired words actually have long-forgotten roots. You can be both "gruntled" and "kempt," for instance. Or could be at one point.
So maybe "overwhelm" is another pleonasm, like "batshit crazy," piling on words for added effect. "Overwhelm," like "overlavish," does means pretty much mean the same its root word. "1. To overturn, overthrow, upset" with a second meaning, "2. To cover (anything) as with something turned over and cast upon it; to bury or drown beneath a superincumbent mass; to submerge completely (usually implying ruin or destruction)."
"Superincumbent"—this process never ends—means, "Lying or resting upon, or situated on the top of, something else; overlying." It strikes me as a handy euphemism for ... well, never mind.
That said, "overwhelm" was simply the wrong word, as we were not ruined, but coped handily. Yes, I felt a pang of guilt—the plan had been to spend Saturday hiking in the Shenandoah National Park. But the temperature was in the mid-80s, we were semi-tired from several hours strolling around Monticello, and the task had begun to grind us down already. We had to conserve energy, achieve our end, return the key and drive home, eventually. Packing instead of hiking wasn't a mistake, as I sometimes say when a reader points out to a word they don't like, it was a choice.
Though there was a moment of moral victory I have to share. Much pre-trip conversation centered upon whether or not his mattress would fit, perhaps folded, in the back of the van. My wife insisted it would not. My son, imbued with all the optimism and endless possibilities of youth, countered that we would easily get it in. We saw there was no point in even trying, and  dragged it to the dumpster too. Just before we left, he considered the Odyssey and observed "I get the sense the mattress wouldn't have fit anyway." I get the sense he's right. 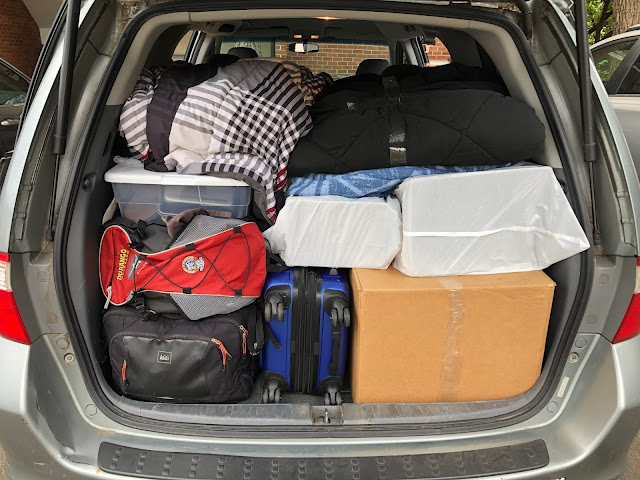