Maybe "Lift Up the Wronged Garden".... 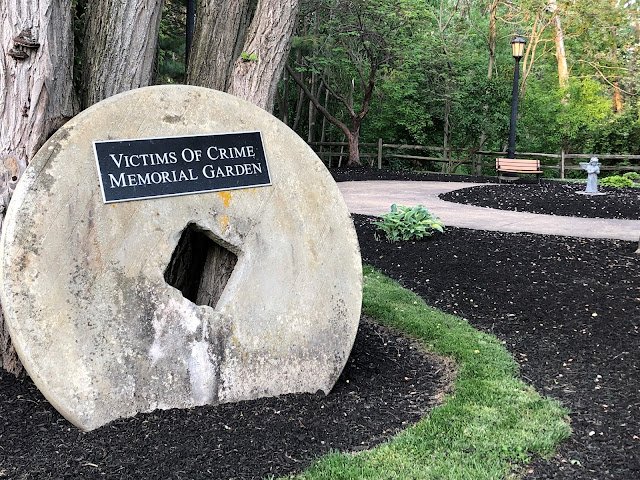 Art gets a bad rap. Ponderous, often. Incomprehensible, or else too apparent. Trivial, derivative, unskilled—the list of flaws goes on and on.
But art has its place.
My hometown of Berea, Ohio, is looking good. And we wandered the downtown, where children played and adults relaxed amidst the gazebos, playgrounds and walkways. We headed to the Triangle to assure myself that the plaque to the U.S.S. Maine was still there—I think figuring out what the "Maine" might have been kicked off my lifelong habit of learning about history. We even strolled into the MetroPark, which looked lush and lovely.
So it is perhaps unfair for me to focus on this little tableau by Coe Lake. The Victims of Crime Memorial Garden.
But it bothered me, in previous visits, and bothered me again Wednesday. More so because I couldn't put my finger on what the trouble is. That it's a downer? No, bad stuff happens, and it helps to memorialize it. That it passes itself off as a "garden" though has no flowers that I noticed? I didn't think of that until later, puzzled as to what the problem is.
It finally came to me: artless. "Victims of Crime Memorial Garden." You can't get more direct than that. It's like an urban planner's note scrawled on a city map denoting where the victims of crime memorial garden will go when the proper poetic sorts figure out how to create a fitting tribute that is soothing and appropriate. Only nobody ever did, and through some awful miscommunication the dashed off scrawl became the name of the thing.
And don't get me started on that grindstone. Yes, Berea was the Sandstone Capitol of the World. And yes, there are a lot of them still scattered around, with every august house sporting one in the garden. And yes, we are proud.
But did anyone consider the optics of using a grindstone to announce the garden where those ground down by having their loved ones fall to crime seek refuge and comfort? (If indeed it is intended for them. By it's name, it might just be done on behalf of the dead, and we living don't factor into the equation. That would explain a lot).
Did they consider they were pushing a grindstone under the nose of the ground down? Or at best offering up a historical non sequitur to safe suburban sorts untouched by a whisper of crime as they are reminded that upon an unfortunate few falls the shadow? The optics of that? Perhaps that is what the little garden statuary angel was stuck there to counterbalance, but the poor cherub just isn't up to the task.
As my wife and I drove east, after a lovely night with our friends, three types of homemade pizza and two types of homemade ice cream—we Ohioans know how to host company—she mentioned in passing the one thing that had bugged her. "The victims garden?" I replied. Bingo. I asked her why. She wasn't bothered by the name so much as the typography.
"Stark," she said. She had a point. All caps, like something off a bowling trophy. Here a few flourishes and curlicues might have gone a long way.
Not that figuring out a proper name is easy. Just as when I criticize a headline, I make myself come up with a better one, on the road the next day I tried to come up with a better one. "Victims: is reductive, like "slaves." It implies that's all they were. "Enslaved people" jars in its own way, I but I get what they're driving at.  Maybe "violence" instead of crime, since I'm assuming it isn't intended for those who cope with graft. "Comfort Those Touched by Violence Garden" seems a start. I'll welcome suggestions—800 miles driven in two days, it takes a toll on the creative abilities.
So my intention isn't to criticize the Berea civic types who took the minimal time, least effort and lowest possible expense to put this together. Yes, they tried. But c'mon guys, rise to the occasion next time. There is nothing wrong with comforting the bereaved or remembering the fallen. But if you're going to do it, do it right.
Posted by Neil Steinberg at 12:00 AM