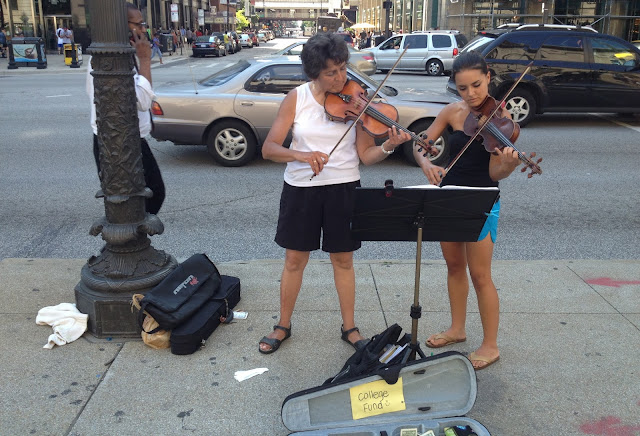 I admire anybody who has the gumption to take their talent out on the street. Because there, you are unfiltered. You see the indifferent people hurrying past, grasp just how few pause, how easily the skill you've devoted your entire life to can be ignored. It's hard enough when you have a screen -- I write for a newspaper, and they pay me, and the people who read it either pay the newspaper or gaze upon its advertisements. But they're far away, generally. I'm shielded from their reactions, for the most part. I don't know if I'd have the balls to take a stack of photocopied columns and stand on the street corner and wave them at passersby trying to entice one to give me a buck. Actually, that's a lie; I do know -- I wouldn't, I couldn't do it. I suppose because no one would pause, never mind give money, or just a few would, out of confusion and pity. It would seem not bold on my part, but sad, even pathetic. 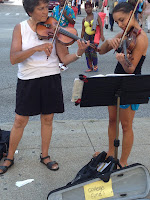 Somehow, this mother and daughter, playing beautifully on Michigan Avenue, did not seem sad or pathetic. There was something artistic, pure, even noble about it. I'm not the first one to notice the brave dignity of the street performer. There's a beautiful, though obscure Joni Mitchell song, "Real Good for Free," (okay, I guess they're all obscure now) dedicated to a guy who played clarinet on the street in New York while the crowd hurries by. Mitchell sums it up with the line, "They knew he had never been on their TV, so they passed his music by," a succinct way of saying that most people need someone to tell them what is good. They have a hard time figuring it out themselves.
In its raw public form creativity, no matter how well-wrought, is "art without a frame," as my pal Gene Weingarten put it in his brilliant article, "Fiddler in the Subway," where he coaxes star violinist Joshua Bell to play in the Washington Metro. Bell plays for 43 minutes on his $3.5 million Stradivarius, more than a thousand people walk by, "cups of coffee in their hands, cell phones at their ears, ID tags slapping at their bellies, a grim danse macabre to indifference, inertia, and the dingy, gray rush of modernity," as Weingarten describes it.
Just seven out of the thousand stop to listen to Bell, and Weingarten's story becomes a meditation on time, and beauty, and busyness. (Speaking of not rushing by, you can read Weingarten's piece, plus other unforgettable classics, in his collection The Fiddler in the Subway, and if you don't own the book, you should buy it immediately, here.)
So give the next musician you see in the street a dollar or two. You'll be taking part in something very old. Because before there were orchestras, before there were concert halls or recordings or contracts or scholarships, there were musicians and their instruments, or singers and their songs, on a street corner, and the people passing by, either pausing or, more likely, not. 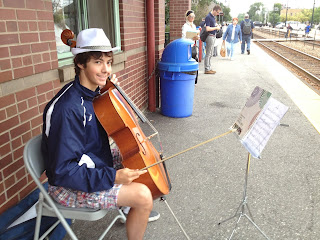 Playing in the street isn't always a matter of need. This cellist was at the Northbrook train station earlier in the summer. He's in my younger son's class at Glenbrook North High School. I only had a minute to listen, before the train came, and didn't get a chance to ask. I wish I had; I assume he was there on a lark, because he only came that morning and never returned. But still, kudos to him. If I taught teenagers, I would insist that they master something and spend an hour doing it in public for change. It would be a challenge—maybe too much of a challenge. Even Joshua Bell, who played in the great concert halls of the world for queens and presidents, admitted he was scared to stand at the L'Enfant Plaza Metro stop and play for commuters. Scary, but also liberating, freeing us from our fears, from that inhibition, that chain, the almost physical dread of embarrassment that holds so many people back from doing what they want to do. Four years ago I found myself in London, at Hyde Park's famous Speaker's Corner. Recognizing an opportunity that would never come again and that I would hate myself for missing, I stiff-armed my reluctance and hopped up on a milk crate to harangue the passing crowd. Only briefly, a little impromptu speech about America. But when I stepped down off the crate, grateful and grinning, I was thrilled, as if I had done something incredible, and I suppose, for me, I had.

Gene Weingarten sent me this amazing coda, how his Joshua Bell piece had been done decades before,  in Chicago coincidentally enough. It also contains a link to the Pulitzer-Prize winning story. You can read it by clicking here. 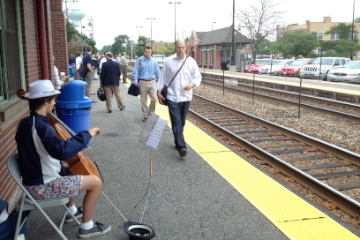