Some dream of pocket combs 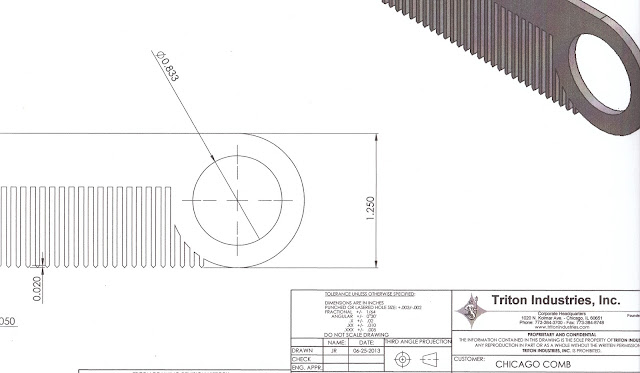 I love stories about things made in Chicago, especially new products, such as this one:

If you walk into the swank Gilbertson Clybourn Pens at 55 E. Chicago, you might be surprised to see, among the fine Waterman fountains and Parker ballpoints, a stainless steel comb produced by the Chicago Comb Company.

And if you’re wondering why a comb is sold at a pen store, well, there’s a story there, one that says something of the intricate path businesses can take, the connections made as a product winds its way from idea to reality.
The story could start in Downers Grove in the early 1980s, where John Litwinski met Tedd Strom at O’Neill Junior High School.
They shared their dreams, as friends will; unlike most, however, those dreams involved industry.
“I’ve always been fascinated by manufacturing,” said Litwinski, 37, an attorney. “And I’ve always been bugged, even when I was a kid, by the whole Rust Belt thing. It always bugged me that high-end products are always made somewhere else, and not a low wage place — Germany, Japan. You always hear it’s too expensive to make things here. Why? Why isn’t that stuff made here? It always bugged me. I wanted to make something here before I knew what I wanted to make.”
The two searched for something to manufacture. They looked at razors — wet shaving is a trend among young men. Germany already makes fine razors. Which led them to combs. Most combs are plastic.
“They are so gray, so ugly, so cheap,” said Litwinski. “Just wrong on so many levels.”
A comb is a fairly simple product “without a million different design steps,” he said. 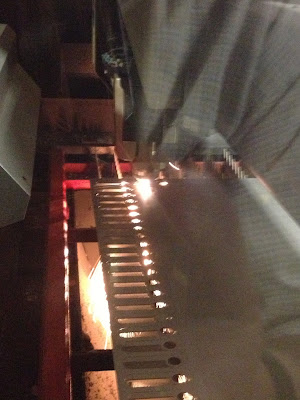 They tapped an industrial engineer friend to come up with design drawings. “Something clean, very modern, classic, timeless,” said Strom, a product manager. He sketched out Model No. 1, as they ambitiously called it, as if there would be many others, a clean look with a big round hole. The first prototype was aluminum, but that was too light. Steel was better— “an iconic Chicago metal — you see it on L cars — a very Chicago-y kind of material,” said Litwinski.
The first batch was produced at a steel company in Ohio, but the two men really wanted to make their product in Chicago. They were promoting the combs at the 2011 Great Shave Event held by Merz Apothecary — the type of gathering that would draw high-end customer who would dole out $40 for a comb. One of the barbers at that event was Joe Wortell. He admired the comb, the two said they were looking for a place to manufacture it in Chicago. That’s funny, Joe said, because my parents own a metal finishing plant in Chicago, Triton Industries.
It takes about 30 seconds for a 6,000 watt industrial CO2 laser to cut a small comb out of a 10-foot-long sheet stainless steel. 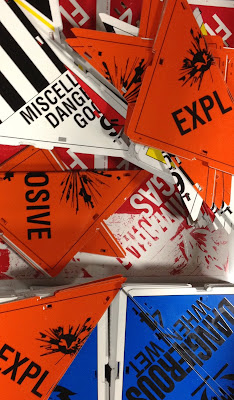 “Smartest thing I ever bought,” said Brent Wortell, owner of Triton Industries, 1020 N. Kolmar, founded by his father in 1961. The bulk of his business is producing the innards of vending machines. “Lots of formed metal in a vending machine,” he said. But Triton’s claim to fame — if a small metal processing plant can be said to have a claim to fame — is that it is the largest producer of those diamond-shaped flip signs denoting hazardous cargo that are on the back of semi-trailer trucks.
The comb is Model No. 2, a mustache-beard comb, which goes on sale Aug. 25. The laser quickly traces each of the comb’s 33 tines, sending out a spray of sparks.
Model 2 will cost about $30. That might be seen as a hard sell to people used to buying a plastic comb for a buck.
“We recognize there’s a little bit of a learning curve,” said Strom. “We emphasize quality, longevity.”
Model No. 1 went on sale in late 2011, and sold 200 before the year ran out. A thousand more sold in 2012, and Chicago Comb hopes to sell 5,000 this year. Model No. 3 already is on the drawing board.
A lot of Chicago companies have their fingers on this one little beard comb. Charter Industries buys rolled stainless steel from Kentucky and cuts it into the 10-foot sheets that Triton can put through its laser. The Chicago Paper Tube and Can Company makes the distinctive packaging the combs come in.
“It’s neat to keep it close to home,” said Strom.
The combs often are given as gifts, and Strom says the same sort of person who buys an expensive pen might pop for a pricy comb.
Which is not, however, why the combs are sold at Gilbertson Clybourn pens.
Gilbertson Clybourn pens is owned by the Clybourn Metal Finishing Company, which in the 1970s bought a company in Winnetka, Gilbertson Silversmiths, where wealthy families would bring their sterling silver tea sets to be buffed or refinishined.
The silver tea set buffing business was not robust in the 1970s, so Clybourn Metal looked for something it could sell that would appeal to the sort of person who owned a silver tea set.
“All these guys in Winnetka walked in, nice suits, nice watches, nice pens,” said Dan Collins, whose family owns both companies. “We finally decided pens were the way to go. Why not pens? No one was selling pens. We did very well for a very long time and we’re still around.”
So Gilbertson Clybourn sells the Chicago Comb Company’s line because they help make them.
“We do the finishing,” said Collins, whose father Frank started his metal finishing business 70 years ago. “They contacted us, and wanted Chicago-only people to do the polishing.”
The rough combs cut at Triton go to Clybourn, where they are hand polished to either a mirror or matte finish, and some end up in the little store on Chicago Avenue, which is where I first noticed them.
Is this a great city, or what?