It's a dirty, thankless task... 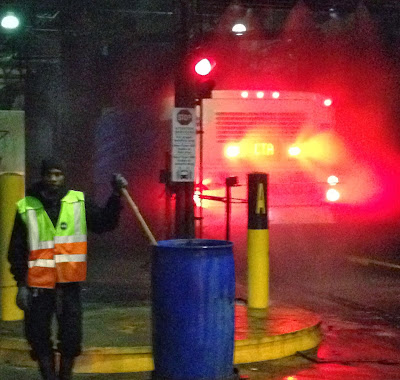 At some point over the past several weeks of this endless winter, one of the nearly 1 million passengers who use the Chicago Transit Authority’s bus system every day contrived, in a manner best not contemplated, to transfer a wad of chewing gum from his or her mouth, to a spot on the floor toward the rear of one of the city’s 1,859 buses. It eventually became a quarter-sized black splotch.
Now Venus La’V Caston has to clean it up.
It is just after 11 p.m. in the sprawling CTA bus depot at 358 S. Kedzie, one of seven facilities around Chicago. It is where, after a day of navigating the salty slush of Chicago streets and ferrying passengers who — in another process best not considered — will leave soiled adult diapers behind, plus food wrappers, newspapers and all the more traditional dirt and trash, the city’s bus fleet is hosed down, scrubbed up, swept out, looked over, and in general readied to go through it all again for another day.
This winter has been particularly hard on the cleanliness of public transit.
“In the extreme cold, more people are using transit, more people tromping in snow, ice and mud,” CTA spokesman Brian Steele said.
Plus more people seeking shelter.
"We have seen increase in number of homeless individuals on our trains," he said.
Buses arrive after their runs, which could be two hours or 12. The bulk roll in between 8 p.m. and 2 a.m., when ridership plummets. First, the buses have their coin boxes removed and spirited to safety by the city's revenue department. Fuel tanks are then filled, and then one of two cleaning regimens is enacted.
There is the daily "general clean." The buses go through a power spray, like in a car wash, and workers with long brushes scrub the wheels. Inside, the garbage is first swept out, then the salt and grime mopped off the floors, and windows and surface wiped. The entire process - refuel, wash, clean - is supposed to take 15 minutes, though that is a flexible goal.
"There's no quota because you never know what you're going to find on a bus," George Cavelle, director of maintenance, said.
That list of found things is very long, not always something you want to read over breakfast, and includes a microwave oven.
Periodically, there is the "deep clean" - think auto detailing, but for a bus - where the stainless steel is polished and gross blotches of gum removed. The CTA tries to deep clean buses and train cars every 14 days, though now with the heavy winter use that real figure is once every 20 days. The deep clean takes about four hours for a 40 foot bus, six hours for the 60-foot "accordion" bus, though again, that is an approximation, as some buses come in heavily abused, or damaged, or covered in graffiti, and thus take more time to get ready to go out again.
If buses seem cleaner than L cars, there's a reason: They are. L cars get used more and cleaned less, with a cursory operator walk-through at the end of the line, and the same deep clean every two weeks, but no nightly general clean unless an L car is flagged as being in urgent need. The L also lost 65 servicers in a felon work program, because of union complaints, so they moved over to cleaning buses.
Cavelle said he has instituted some efficiencies. For instance, previously garbage would be swept out the door of the bus and into the depot, in a pile, "and then they would come back later and spend an hour cleaning up the mess they had made," said Cavelle, who changed that. "We took a step back and said, 'Why are we doing double the work here?' Culture is always the hardest thing to change."
Technology lends a hand. If you've noticed less graffiti scored into the windows, thank a peelable protective plastic coating that the CTA started putting over bus windows in 2010, plus as many as 10 cameras per bus.
Several of those cameras blandly watch as Venus La'V Caston takes a bottle of Intercon breakthrough, a citrus degreaser used to clean clogged drains and remove tar.
"Just pour a little bit," she says, splashing the liquid on the splotch of gum. She takes a special tool — a little metal scraper with a grooved attachment that mirrors the grooved bus floor, and scraped away the gum. A few passes and it's mostly gone, a small victory in a tiny skirmish in a war that never ends.
"Sometimes," says La'V Caston, 31, who lives on the West Side, "you have gum from back to front." 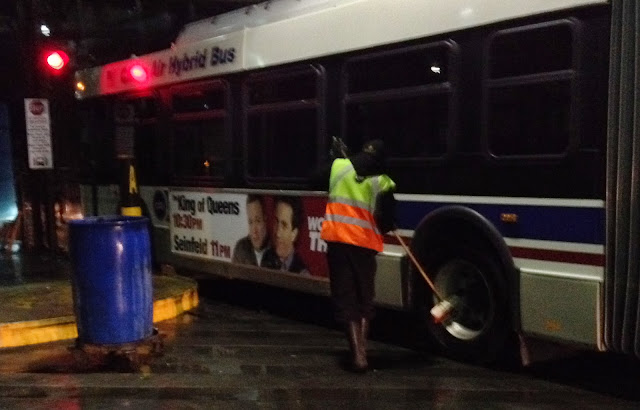