Divvy Diary: Why did the rooster cross the Loop? 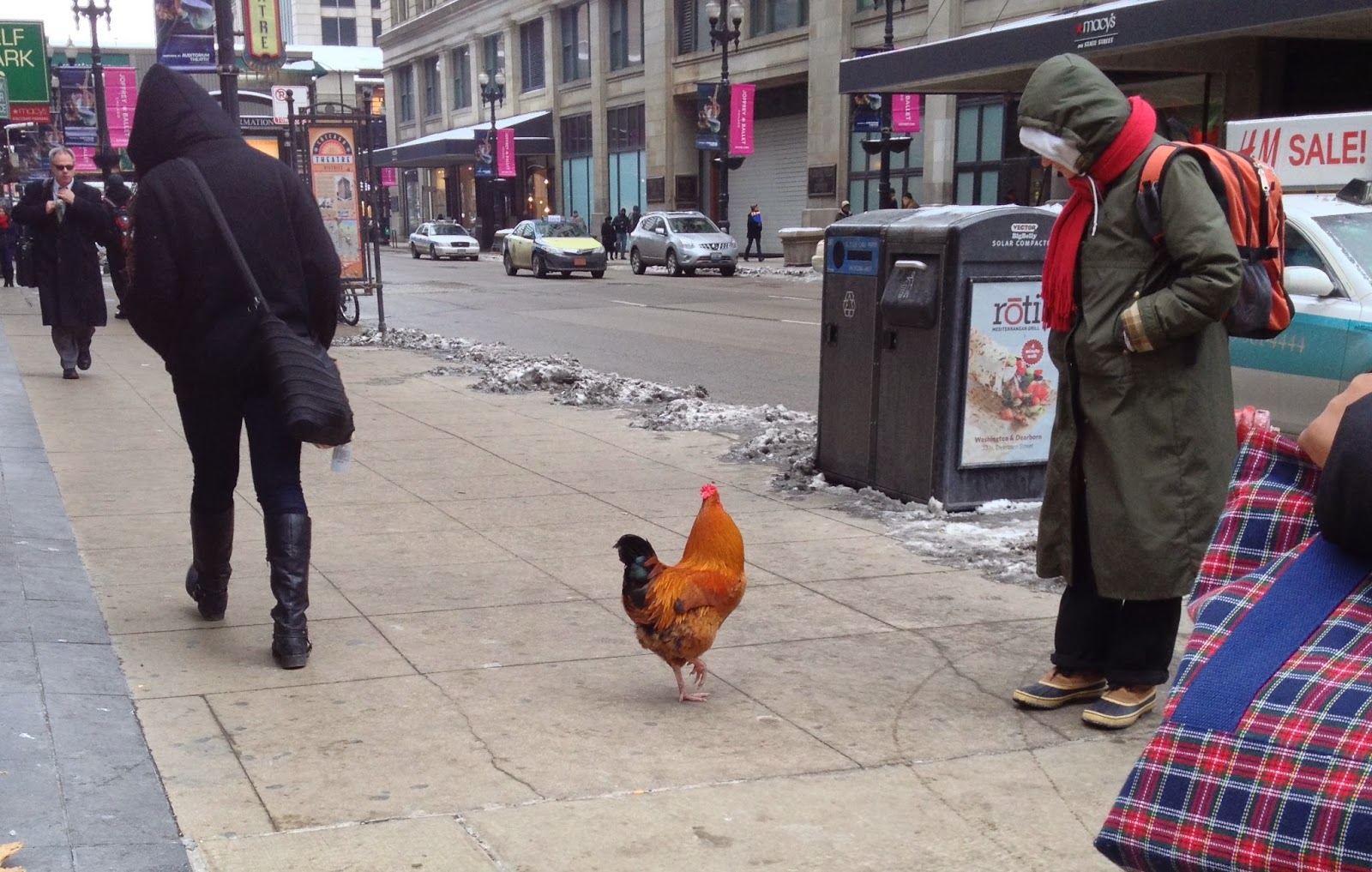 This could have been written without the Divvy aspect, but people seem to have an endless appetite for anything involving the bikes, and I was riding one Tuesday when I met this man and his bird. Plus, I suppose, there wasn't a whole lot to say of interest, beyond the fact that I saw a rooster strolling down Randolph Street on a very cold February day in Chicago. 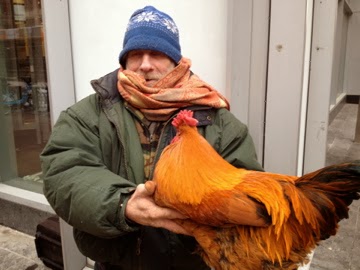 Once upon a time, I dreaded appointments at the University of Chicago. That meant driving the better part of an hour on the Edens, finding a parking meter for a couple hours downtown, doing a bit of work at the office, then jumping onto Lake Shore Drive, trying to avoid a ticket driving the ridiculously slow posted speed to Hyde Park, then trying to find a spot there , knowing I’d have to reverse the process.
Now I take the Metra Electric. It costs $3. The prospect alone is enough to make me happy. Then Divvy showed up in July, with a station at the Merchandise Mart, right outside my office door, and a station on Michigan Avenue steps from the Millennium Park Metra Station entrance. To be tucking in at the Quadrangle Club at noon, I need to take the 11:30 Metra Electric, and to get that, rather than walk 20 minutes, I can Divvy for six. My joy is compounded. 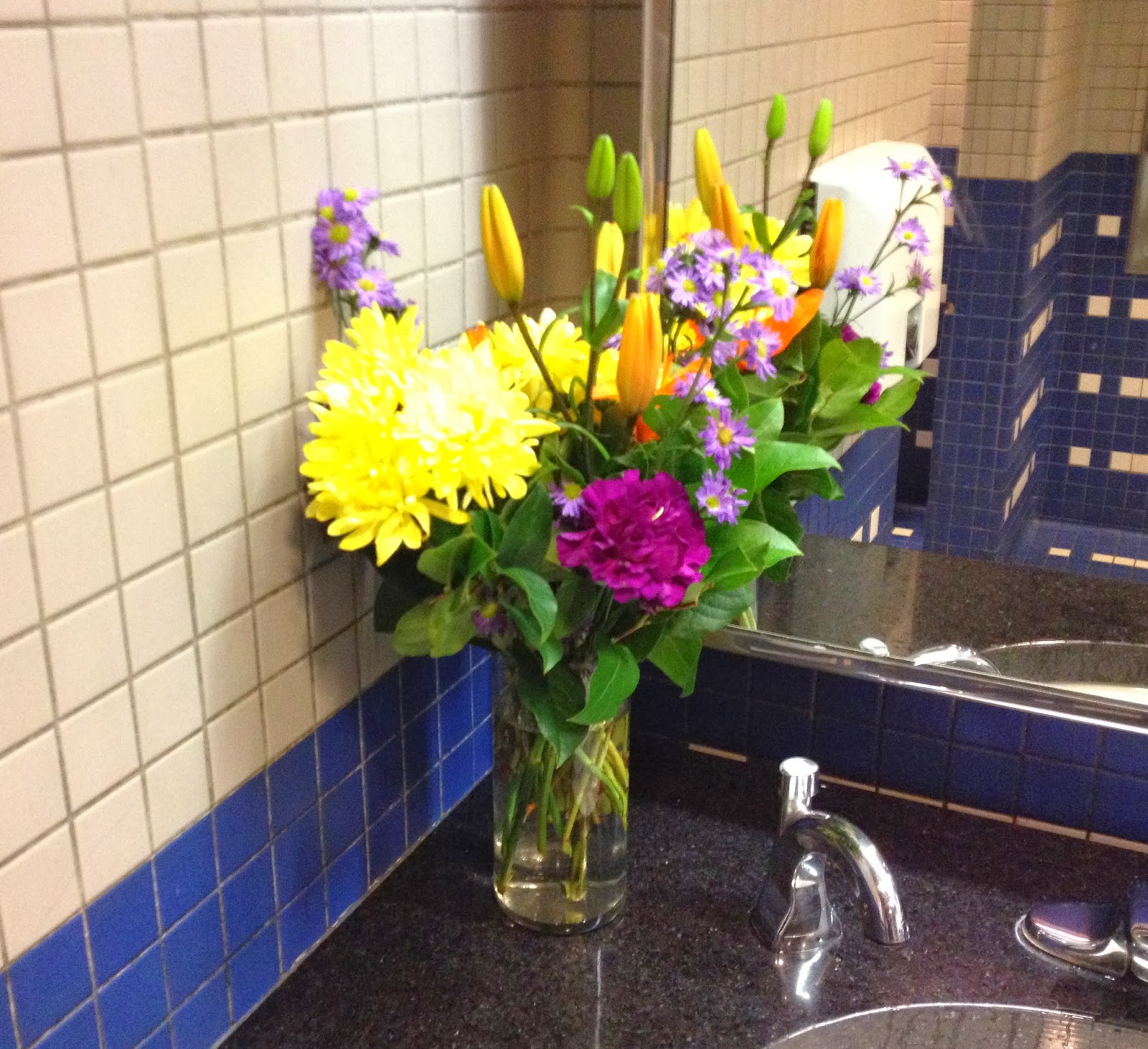 On Tuesday, I return from Hyde Park, weighed down with books from Powell’s on 57th Street (I limit myself to three so I don’t buy 30, and build an extra 20 minutes browsing time into any campus visit). At the station, I notice that someone in Metra sees to it, mirabile dictu, that there are real fresh flowers in a vase on the men’s room sink — purple daisies, yellow lilies and carnations. Kudos from the press; with such details is a glorious city made.

Outside, I yank a bike from its dock, walk it across Randolph, hop on and am pedaling west, about to turn north onto State when I see something that, in 30 years of wandering the Loop, I have never seen before: a rooster. An orange rooster. Just standing at the corner, as if waiting for a bus. I pull onto the sidewalk, set the kickstand, and take a few pictures, doing my reporter thing. The rooster did not seem to belong to anyone, but a crowd had gathered.
“I’m from the city. I’m not used to live animals on State Street,” exuded Erick Russell, a passerby. “I didn’t know roosters were so pretty,” said another pedestrian.
On the ground was a piece of cardboard, a sign, and I figured its owner must have stepped away. It occurred to me that, this being downtown Chicago, leaving a $1,200 bike unattended with my REI bag bungied into the front carrier, was an unwise practice. So I rolled it three yards away to another Divvy station right there, slammed the bike in and grabbed the bag, only to realize I had managed to trap the strap in the station’s docking mechanism (Practical Divvy tip: Remove personal items from front rack before docking your bike).
In the time it took me to fish out my fob, the imagined scenario formed clearly in mind: The strap of the bag remaining jammed the mechanism, the bike refusing to budge. The panicked call to Divvy. The 20-minute wait for the van to arrive. The grinning mechanic, a young man in a jumpsuit, greasy hair falling in his face, using exotic tools taken from a case, a crowd gathering, while I stand helplessly by, the rooster pecking derisively at my ankle.
“We had another elderly gentleman get his suspenders caught in the docking port once,” the Divvy repairman would drawl, concentrating on the mechanism. “Somebody called the police instead of us. Poor guy had his pants half off by the time we got there. Can’t figure out how he did it, or why he was on a bike. These old people,” a quick glance in my direction, “don’t know when it’s time to give up the trappings of youth.”
In the real world, I pulled the bike out, freed the strap, jammed the bike back in and turned to meet Jose, the owner of the rooster, whose name is Garfield, after the park where they live.
“I found him in the park,” said Jose, who declined to give his last name but said he is 48. His breath was perfumed with a scent I will call eau de booze. “I’ve had him since he was a baby.” He held his thumb and forefinger about an inch apart.
Jose had a battered black rolling bag and explained how when the bird becomes cold, he stashes him in the bag to warm up. They sleep together in the park, which is a problem because the rooster, which is 7 months old, is not housebroken, evidence of which Jose indignantly showed me on his jeans. He has been homeless for five years, since being injured, he said, and he turned, lifted his shirt and displayed a long scar down his spine.
The rooster definitely drew a crowd, and made me think of beggars in Paris, who often pair with cats, knowing that humans feel pity toward animals far more readily than they open their hearts to other humans. I gave a buck toward the upkeep of the bird, wished them both well, freed the bike I rode in on and was on my way again. 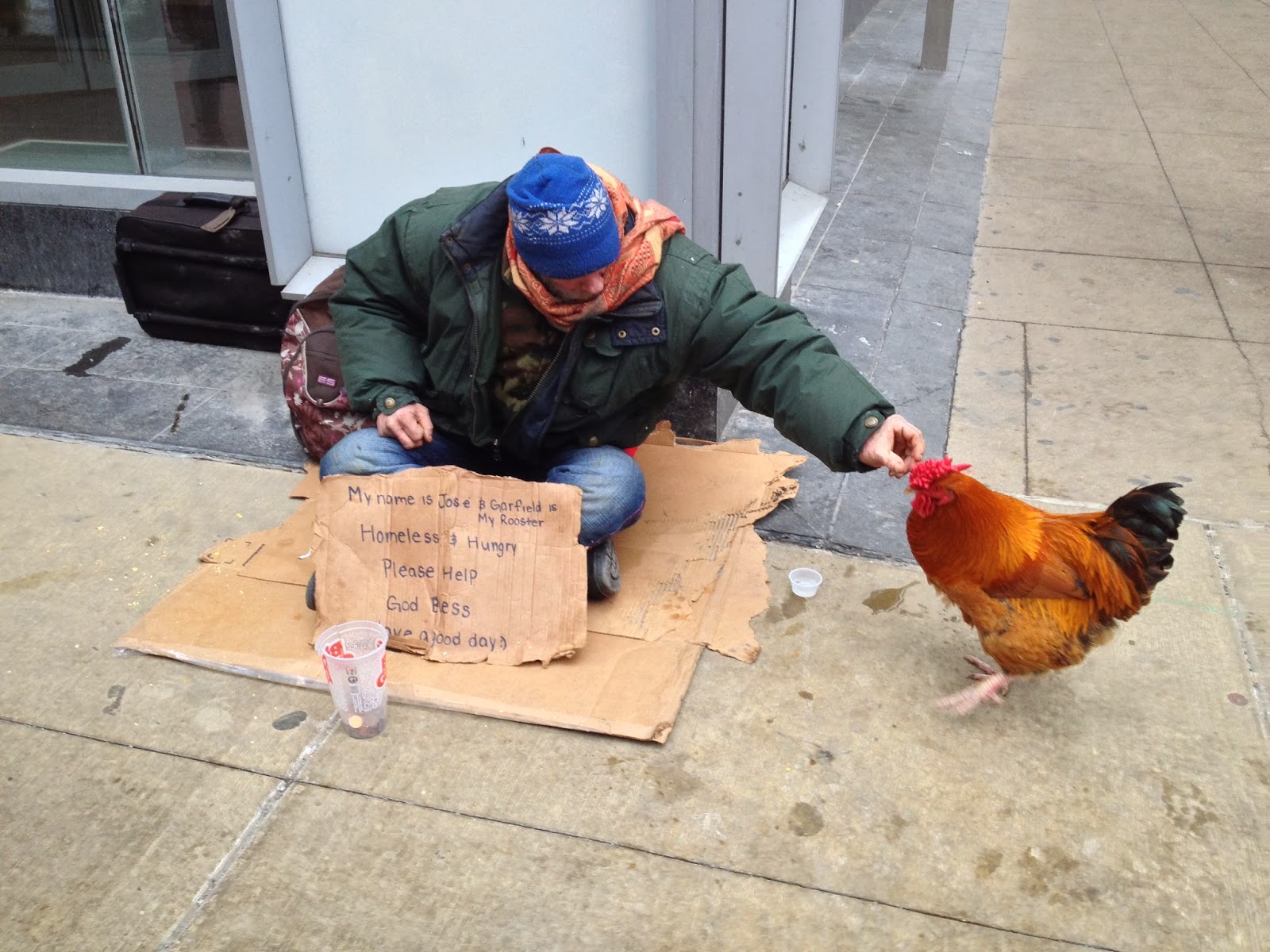