Design just has to work 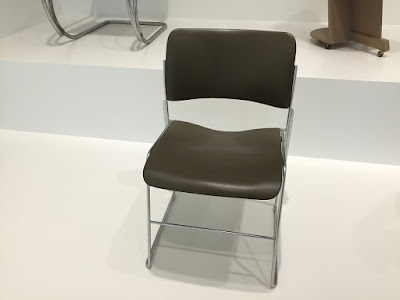 Certain things are so iconic, so ubiquitous that it's odd to think that someone designed them, and they have an official name, like this classic of industrial seating, the GF 40/4 Chair, designed by David Rowland, who spent eight years, from 1956 to 1964, perfecting it.
I noticed the chair last week at the Art Institute of Chicago in, appropriately enough, an exhibit on the influence of architects on chairs (and some people think the Van Gogh bedrooms are the most exciting thing going on there now!)  The "GF" in its name is for "General Fireproofing," the Youngstown, Ohio company that made a variety of iconic office furniture: swivel desk chairs, metal bookshelves, generic office desks. The "40/4" part of its name is because 40 chairs can be stacked four feet high. It was shunned by "skeptical manufacturers," according to the exhibit, who didn't believe the wiry chair could support human weight and stand up to hard use. Until Skidmore, Owings and Merrill ordered 17,000 for the new University of Illinois at Chicago campus in 1964, and General Fireproofing happily took the job. Millions more of the chairs have been made since then, though I would bet many of those original  U of I chairs are still in service. A reminder that design doesn't have to be beautiful; it just has to work, in order to endure.
Posted by Neil Steinberg at 12:00 AM