The beauty of bicycles 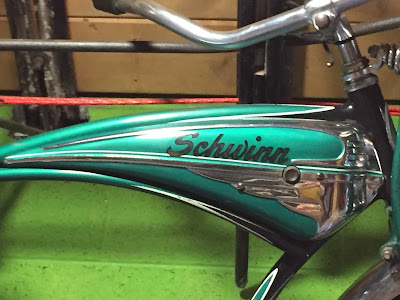 Who doesn't love old bicycles? The people who built the Schwinn above, who designed the frame behind the handlebars to flare out, resembling ... what? The thorax of some emerald insect? The wing of a bird? What were they thinking? Doesn't matter. The end result is wonderful.
The other day I wandering into University Bicycles, the sprawling cycle shop just off the Pearl Street Mall in Boulder, and was first amazed by the jammed mass of bikes of all colors, sizes and descriptions. The vast repair department, the arrays of helmets, gloves and bicycling jerseys. 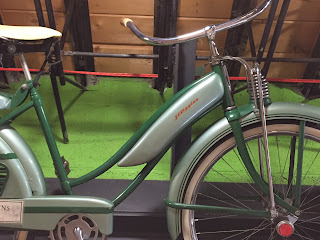 I just had to explore. Even though I'm not in the market for a new bike—my black Schwinn Cruiser with its fat whitewall tires does just fine—and as much as I admired their custom "University Cycle" Italian-style racing shirts, I'd look like a fool in one. You need to earn clothing like that.
My attention shifted to University Bicycles museum's worth of antique bicycles hanging from the ceiling.  Most were Schwinns, the dominant American bike company for most of the 20th century (and a company, I should point out, founded in Chicago in 1895). There were lesser brands as well, such as a 1888 Hickory with wooden spokes and rims.
I'm sharing the pictures just to say, "Hey, look at this." But they do raise a question: why was design so important on these bikes? Nowadays bikes are all about performance, about simplicity, the lightness of the alloys, their toughness and ruggedness and speed. The streamlined chain guards and fenders are all a thing of the past. Why don't we value them anymore? My guess: because we live in a world where we jettison the superfluous, to save money. We can't afford style. 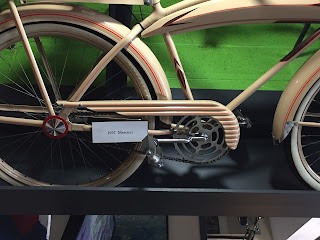 Maybe because bicycles were newer, and companies felt they had to sell the product. If you don't know it, the bicycle was one of those technological innovations that changed society, like computers, television and the automobile. There was a Bicycle Craze in the 1890s. Women started shedding those layers of skirts because they were riding bicycles, which not incidentally put them beyond the reach of family and chaperones. Editorial writers wrung their hands, as editorial writers do, and Wondered What It All Meant.
If you want to see more, there's a rambling video on YouTube that gives a jumpy tour of many more of the older bikes in the store. Or, better, stop by University Bicycles next time you are in Boulder. I asked if they minded if I photographed their bikes, and they said go right ahead. Nice people. I bet they're even nicer if you buy something.
Posted by Neil Steinberg at 12:00 AM