Something new along with the Gideon Bible. 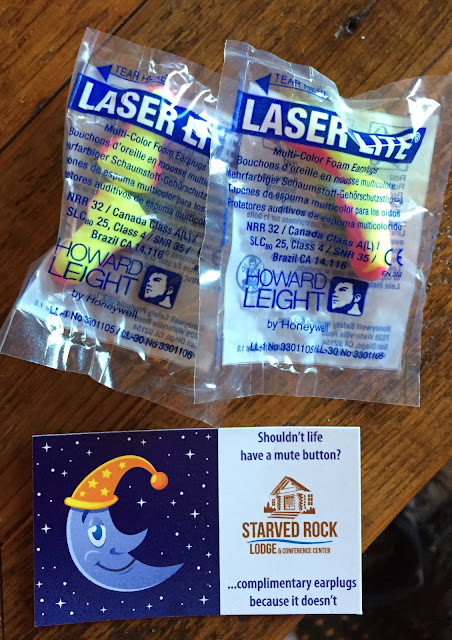 I've stayed in a lot of hotels, high and low.
There was the Gritti Palace in Venice, the Biltmore in Santa Barbara, the Chateau Frontenac in Quebec.
Those were highs.
Then there was that motel on La Cienega Boulevard in Los Angeles, the one were you paid for your room by pushing your money into a stainless steel tray under a bulletproof window. The dump in Des Moines where we couldn't open the windows nor turn the heat off. And that place with the flies.
Those were lows.
But I've never, ever, been in a hotel anywhere in the world that set out earplugs on the night stand, along with a cheery business card, trying to put a bright spin on it.
Don't get me wrong. We loved our stay at the Starved Rock Lodge. A Civilian Conservation Corps classic, with an enormous lobby with a huge stone fireplace. Rustic rooms. An adequate pool.  We've already booked our room for next year.
But the moment we checked in, well, it was in room 201, at the end of the hall. And I thought as we trooped toward it, Well, at least we'll be far away from the elevator. But just as we approached the room, we passed another, single elevator, right next to our room. We opened the door, as I was processing this, set down our bags, and my eyes fell on these ear plugs. "Just how loud could that elevator possibly be?" I wondered. My wife went outside and pushed the button. I sat on the bed, feeling unfortunate, and listened. You could hear the ping of the elevator loud and clear, like a ball peen hammer to the base of the skull.  You'd think hotels would turn those pings off. I would have passively cursed my lot, jammed the earplugs in and worn them for the next day.  But my wife is a woman of action—while I sat morosely on the bed, staring at my foot, she trooped down to the desk and got us moved, to room 208.
Which also had earplugs. I realized they were standard issue. Every room has 'em. Yes, the hotel is old, and poorly insulated. We would hear the whoops and muffled shouts of families parading down the hall. But you get that in most hotels, and none of them have earplugs.
We never availed ourselves to the earplugs, despite the familial clatter, though we did take them home, for use at Union Station, where I'm an enormous fan of earplugs -- people don't realize they're deafening themselves by standing for hours, cumulatively, next to roaring engines.
Earplugs are a bad bit of equipment to set out on the night table. Necessary or not, they set the wrong tone, and says, "This room is really loud." To be honest,  the Starved Rock Lodge didn't seem louder than any other hotel, once we got away from the elevator. So much about life is psychological. It's as if they had a can of air freshener, or a fly swatter. I am not a hotelier, but I do have a single word of advice:
Mints.
Posted by Neil Steinberg at 12:00 AM