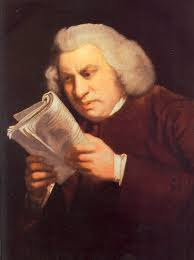 Sometimes I surprise myself with what I can get away with putting in a newspaper column, which tend to be about, you know, news.  Samuel Johnson isn't close to news — has been dead for 232 years, and his life isn't exactly crackling across our social consciousness. It should be. I called up this column to share it with an acquaintance and realized, while I was at it, I should share it with you here.

"Society is held together by communication and information"—a sentiment perfectly true in 2010, though James Boswell wrote it in a book published in 1791.
Friday I finished reading Boswell's The Life of Samuel Johnson, and while its 1,433 pages cannot be summarized in a newspaper column, I hope you won't mind my trying to anyway. Every 1-0 Cubs/Phillies snooze fest gets reported; why not this?
Johnson is an epic figure, both for his literary output and his physical person—a huge, unkempt man, his face scarred, blind in one eye, he twitched and muttered, and was both a figure of ridicule and the greatest English man of letters between Shakespeare and Dickens.
His 1755 dictionary—a massive effort he compiled alone with half a dozen clerks—endeared him to his countrymen, particularly since the French assigned 40 Frenchmen to their dictionary, and they took 40 years to finish. Johnson took seven.
His would-be biographer Boswell went to London as a 22-year-old Scottish lawyer with a cheerful "desire of being acquainted with celebrated men of every description."
Boswell succeeded, hanging out not only with Johnson, but economist Adam Smith, artist Joshua Reynolds, statesman Edmund Burke, actor David Garrick, the cream of Georgian London. Unsatisfied, Boswell slips over to France to meet Voltaire.
Such a man can't help dropping names, and in the same all-caps fashion that zealots use today. Here Boswell's about to dine with Johnson for the first time.
"I had gratified my curiosity much in dining with JEAN JACQUES ROUSSEAU, while he lived in the wilds of Neufchatel," Boswell writes. "I had as great a curiosity to dine with DR. SAMUEL JOHNSON."
Johnson is so fearsome that Boswell is surprised to find good food—veal pie!—on a decently set table.
"I supposed we should scarcely have knives and forks, and only some strange uncouth, ill-drest dish,"Boswell confesses. "But I found everything in very good order."
Not cuisine, but Johnson's genius for wit makes the book enjoyable.
"Patriotism is the last refuge of a scoundrel," Johnson says.
"Sir," Johnson says, ending a discussion of the worth of pious resolution. "Hell is paved with good intentions."
Marrying a second time is "the triumph of hope over experience."
No one is better at taking down mediocrity.
"He is not only dull, but the cause of dullness in others," Johnson says.
The American Revolution is going on. Johnson, a royalist, puts his finger on the hypocrisy that would haunt the new republic.
"How is it that we hear the loudest yelps for liberty among the drivers of Negroes?" he asks.
Boswell can't resist jumping in. He dutifully records Johnson's objections to slavery—"No man is by nature the property of another"—and then must register his own objections to such "wild and dangerous" attempts "to abolish so very important and necessary a branch of commercial interest." An institution that—opponents of gay marriage please note—Boswell argues, "in all ages GOD has sanctioned, and man has continued."
I enjoyed Boswell's hidebound thickheadedness almost as much as Johnson's brilliance. He recoils at someone who shook David Hume's hand.
"I took the liberty to object to treating an Infidel writer with smooth civility," he says, suggesting instead the philosopher should be kicked down the stairs.
"An Infidel then shall not be treated handsomely by a Christian," he writes, voicing a sentiment troubling us now that we hear it from other quarters.
They talk of sexual equality. Boswell is shocked that his father is considering leaving any inheritance to his sisters.
"You ask by what right your father admits daughters to inheritance," Johnson writes. "Ask yourself, first, by what right you require them to be excluded?"
They are vexed by the same media problems that vex writers today.
Booksellers protest to Parliament over threatening new technology, "cheap editions of the most popular English books," causing publishers to "suffer from an invasion of what they had ever considered to be secure."
Johnson's work is borrowed without payment or credit.
"It was seized on with avidity by various publishers of newspapers and magazines, to enrich their publications," Boswell writes.
Johnson is forced to take out an advertisement complaining "those essays are inserted in the newspaper and magazines with so little regard to justice or decency, that the Universal Chronicle, in which they first appear, is not always mentioned."
Instead, his work is stolen "with the most shameless rapacity."
In another current touch, there is a comments section in the edition I read. The margins are filled with notes by Johnson's friend, Hester Lynch Thrale Piozzi, who considered Boswell a parasite and a liar and eagerly contradicted him.
"Not I—never had," she writes, when Boswell quotes Johnson saying she had high regard for the Scot. "I thought him a clever & a comical Fellow." So feedback is nothing new.
I'm not expecting you to run out and read it—it took me months, and I think you have to be a certain sort to finish. But it was comforting, somehow, to see that the shifting media landscape of today, with its whir of websites, resonates so neatly with a distant time of broadsheets and pamphlets.
"We must read what the world reads at the moment," says Johnson, waving off suggestions that the "teeming of the press in modern times is prejudicial to good literature, because it obliges us to read so much."
The spread of information is always good.
"It must be considered," he says, "that we have now more knowledge generally diffused."