Cleveland and Chicago: A Tale of Two (Baseball) Cities 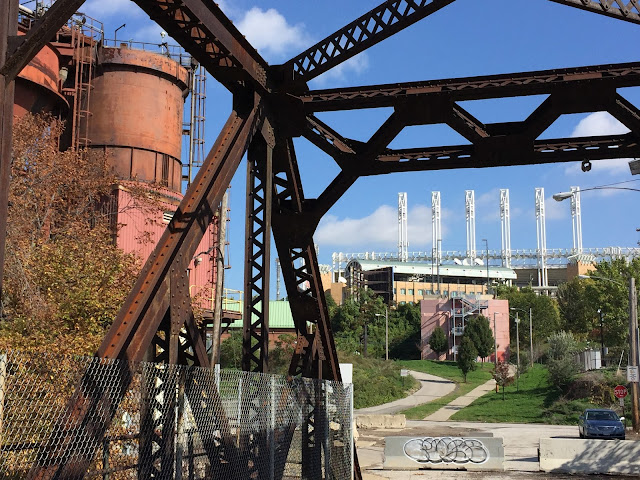 About an hour after the Cubs won the pennant Saturday night, my boss told me to get myself to Cleveland "pronto.' I was on the 7:35 a.m. flight Sunday. By 10 a.m. I was on the Rapid downtown. I dropped my bag at the Hyatt at the Arcade—I wasn't sure if I was going to stay a day or a week—and was snapping this picture about 12 noon, while wandering around Progressive Field, looking for ... well, anything. My only instructions were to compare the two cities. It was Sunday, and all I could think to do after checking out the ballparks was go to the East Side and talk to black Clevelanders about baseball. I figured, if nothing else, I could look at race and baseball. Somehow the whole thing came together and by 4 p.m. I was back at the hotel, writing this.  Rahm Emanuel hasn't been very high on my list for the past few years but, I have to admit, comparing his remarks to the mayor of Cleveland's, you have to give him credit for verve. 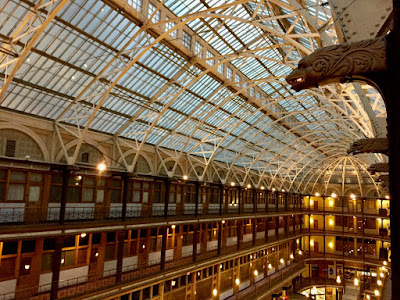 CLEVELAND — Both downtowns bear ghostly scars, names of great department stores now gone: Marshall Field’s in Chicago, The May Co. here. Plaques in both commemorate where Abraham Lincoln once trod, and both struggle today with notorious police shootings of young African-Americans, reminding us that Lincoln’s work remains undone. Both have hollowed-out industrial zones, more memory than manufacturing, and startup tech centers straining to replace them.
Still, Chicago and Cleveland, whose Cubs and Indians meet for Game One of the World Series on Tuesday, are more different than alike, starting in size. Chicago is a behemoth. The third-largest city in the United States, 2.7 million people in 234 square miles. Cleveland is a relative sliver, barely squeaking into the top 50 at No. 48, a bantamweight 390,000 people over 82 square miles.
Which means Cleveland has 15 percent of the population of Chicago and about a third of its density; walk around, and Cleveland just seems emptier: weedy lots, empty streets, distant suspension bridges and rusty warehouses slowly reverting back to nature. Parking downtown can cost $7.50 a day. On Monday morning, a stretch of Concourse C at Cleveland Hopkins Airport contained no people at all. 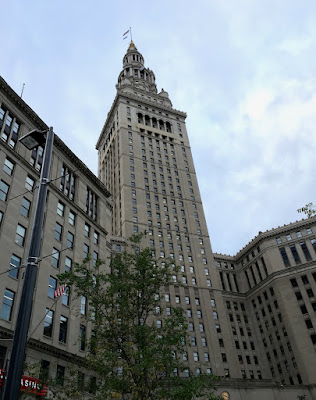 Still, Cleveland has pride and a sense of beleaguerment. Signs in bar windows read, "Cleveland against the world." Chicago has pride and attitude, which you can see by comparing our mayor, Rahm Emanuel, with Cleveland Mayor Frank Jackson. I asked both to comment on the relative merits of their cities.
"Cleveland is a city of champions, and all of us are working hard every day to create a better Cleveland, together," said Jackson, displaying the low-key boosterism rampant in his town. "The strength and determination displayed by our sports teams are a reflection of our city and its people. On a national level, many are surprised by what they see and experience in Cleveland, but Clevelanders know that this is who we are and what we do. We win together, and we move forward together."     Emanuel's comments pack more zing.
"Cleveland is a perfectly nice town but let's be honest, no one outside of Cuyahoga County is pulling for the Indians," our pugnacious mayor remarked. "And I'd be willing to bet there are more than a few people there who would like nothing more than to fly the W."
And why not? The cities can't compare on most metrics: Chicago is famous for architecture, with dozens of buildings known worldwide, including Willis Tower, for decades the tallest building in the world. Cleveland has the Terminal Tower, which looks like the box the Statue of Liberty came in.
The Cubs have Wrigley Field. No more need be said. The Indians have Progressive Field, nee Jacobs Field, an asymmetrical, blond brick ballpark, built just as Camden Yards was about to make Wrigley-like nostalgic hip again in baseball park construction.
Unlike Chicago, Cleveland hollowed out; it has less than half the population it had when the Indians last won the World Series in 1948. Chicago is predominantly white: 45 percent, with 32 percent black and 31 percent Hispanic. Cleveland is a majority black city: 53 percent, with 35 percent white and 5 percent Hispanic.
Yet Cleveland is also less segregated, somewhat. In a recent study, Chicago was the second most segregated city in the country, after Detroit. Cleveland was fifth, and black residents I spoke with paint a cheery picture of the situation.
"I grew up in Cleveland. It's a melting pot of diversity, nationalities," said Harold Childres, a bartender/server at Stonetown on Prospect Avenue. "You have your Asians. You have your Hispanics. You have your Caucasians. You have your African-Americans. We all get along together.
"Certain areas might be more laden with one particular race, but we all get along. It's like a different city, a mixture of everybody. Even Little Italy, at one point in time, black people wouldn't go to Little Italy. We can work there now. I don't know what has changed. People have mellowed in their feelings as far as racism."
Baseball has struggled to create a diverse fan base; but black Clevelanders I spoke with waxed nostalgic about the Indians, how their fathers taught them to love the game. Others spoke of the general civic pride of having a winning team with a diverse roster of athletes.
"The simple fact is the Cavs did it, now the Indians are going to do it too," said Nate Rivers, 20, standing at the Windermere train station on the far East Side, wearing a cap with the controversial Chief Wahoo caricature on it. Some sports shops in Cleveland won't even carry merchandise depicting it.
Which leads to the one thing that is exactly the same in both Chicago and Cleveland: championships are good for business, for restaurants, stores, souvenir and clothing manufacturers, and, yes, newspapers.
"That the city might have another winning team makes everybody happy," said Lee Battles, 31, riding the bus down Euclid Avenue through Cleveland's extensive medical district. "Everyone buys the shirts and baseball caps, gives everyone a reason to be proud. A lot of people have jobs, cleaning up, food preparation, and that's cool too. A lot of black people play on the team, and I'm happy about that. It's cool to see your city on ESPN, and you say, 'Oh my God, Cleveland's on ESPN!'"
More than one person asked me, having both grown up in Cleveland and lived in Chicago for 35 years, which team I'm rooting for. And I reply with candor, "I win either way."
Play ball. 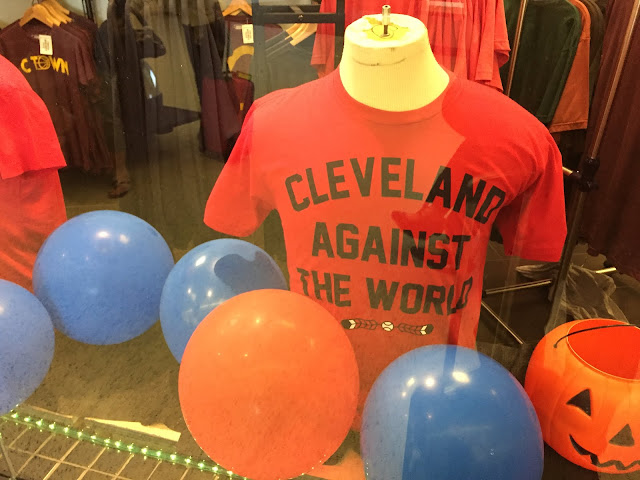