Grab a squeegee; cleaning up after Trump will not be easy 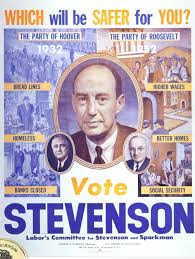 “Government is like a pump,” Adlai Stevenson said during the presidential campaign of 1952. “And what it pumps up is just what we are, a fair sample of the intellect, the ethics, and the morals of the people, no better, no worse.”
That’s true, sadly, though a hard truth to stomach in the era of Trump. Eww, yuck. Where did that come from?
Oh, right; it came from us. Half of us anyway, nearly.
We’ve become so accustomed to this daily spew of presidential bile: rage tweets, bald lies, outrageous claims, the whole wretched vomitorium, that it’s easy to become frozen in the moment, staring transfixed at today’s slurry, bubbling up from the depths, hardly daring to hope that at some point in the indeterminate future the man is going to be booted off the stage.
And then what?
Cue the celebration, right? Like the end of a Star Wars movie: trumpets blaring, banners flapping, Ewoks dancing, Luke and Leia exchanging coy smiles.
That’s what people seem to anticipate, with growing expectation, as Robert Mueller picks off Trump’s confederates one-by-one, and the bloodhounds of justice bay, closer and closer. The end is in sight!

Pretty to think so. If you are feeling that way, well, spoiler alert. You might want to stop reading here.
As comforting as it is to imagine that all our problems will be over, that, alas, is as much an illusion as The Donald's claim that electing him would make all our dreams come true. Trump is a symptom, not a cause, and the same knee-knocking fear, moral rot and intellectual dishonesty that heaved him from the bowels of our national experience will disgorge a new version. Maybe even a more dangerous one. Another hard lesson of our era is that there is no shortage of men ready to betray their country and its ideals for adulation and power. The pump is still chugging. Who knows what it will dredge up next?
What to do? Stevenson never got to be president. He was the original egghead, a term coined in tribute to his bald dome. I won't portray that as a tragedy. He had a certain smug, fey, self-satisfied quality that rubbed people the wrong way.
We need to avoid that. Stevensonian superiority is a trap that even he recognized. During that 1952 election, in Chicago, he said: "Government in a democracy cannot be stronger or more tough-minded than its people. It cannot be more inflexibly committed to the task than they."
And that task is? To look beyond Trump, to the heart of the problem: his supporters. To coax them away from the Trumpian nightmare and back to the American dream. It won't be easy. The first step is understand them. They are not evil, they are not stupid, necessarily. Dismissing the Right the way it dismisses the Left, as traitors and idiots, is not helpful. Then how? Since Trump is a con-man; it might help us to consider them The Defrauded.
Think of an elderly person who gives her life savings to a Nigerian prince. Why? Because he reached out to her and offered her a vision—a cool $20 million USD, in an aluminum suitcase.
When you sit Aunt Betty down, and tell her the bad news—your money's gone, there is no prince—sure, she might respond with appropriate shock, regret and embarrassment. But that requires a savvy that would have shielded her from this folly in the first place.
More likely, she grabs the checkbook back, screams "NO!" It is you who are lying, saying these awful things about Prince Haruum. The dream is not easily surrendered.
And before you scorn that person, look at your own life. Being clear-sighted isn't difficult when the view is nice. If you have a good job and a supportive spouse and acceptable kids and a not-bad house, then sure, those clutching at a con can seem inexplicable. For many Americans, Trump's slimy, bogus dream, his goose-stepping superiority, is all they have, and if you're going to laugh as their dream turns to ash, well, where is that empathy you are so proud of?
Like any patriotic American, I'm looking forward to the day when Trump and his cohort are squeegeed into the storm drain. When that happens, the really hard work will begin: dealing with his duped followers.
Posted by Neil Steinberg at 12:00 AM