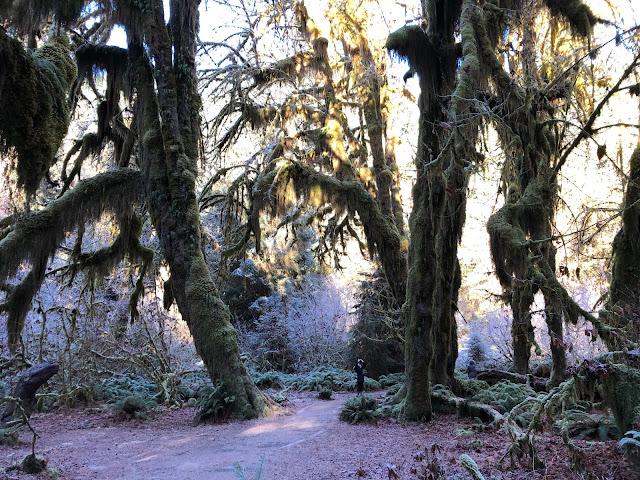 Reader Coey (her "nom de blog"—"a lady's name should only appear in the newspaper three times, you know" she explains)  sent a trio of arresting photos, taken earlier this month in Olympic National Park in Washington State: her timing was good; much of the park is closed now, due to storm damage.
She writes:


It's a spectacularly beautiful place, and we were fortunate enough to be there when the temperature and sunlight were such that, in some places, the deep greens were set off by a dusting of snow...I'd add that Olympic National Park is well worth a visit. I knew next to nothing about it before we went on a trip to Seattle, and the diversity of natural beauty there is something to see. There are three distinct ecosystems, so something for everyone!

So have you looked at the photo? Good.
Now look at it again, closer. I chose this one of the Hoh Rainforest's Hall of Mosses because of the people in it. You might not see them at first glance—I didn't. But look harder—there are two, and noticing them completely changes the scale of the photograph. And reminds us that sometimes we have to put in a little effort to perceive the people involved in any situation, because we don't expect them, or they blend in too well to their background. Often they're there, if only we look hard enough.

Thanks Coey for sharing this. EGD welcomes submissions for The Saturday Snapshot, even though there is a backlog, and appreciates the patience from those who have already offered photos. I'm working my way toward them.