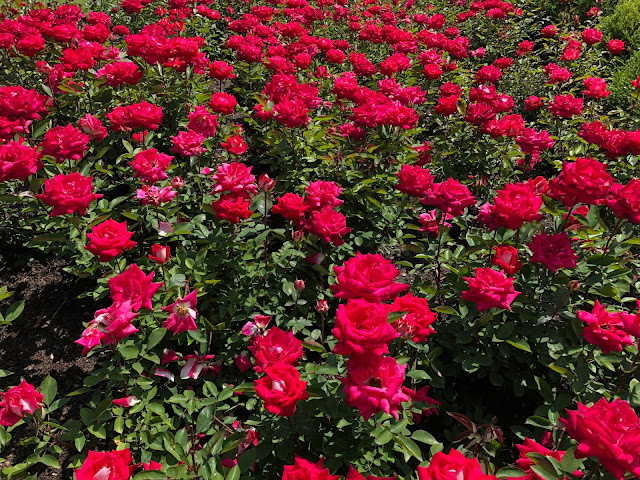 Nick and Nora Charles don't carry the cultural heft they did when I was growing up, and the "Thin Man" series of 1930s black-and-white detective movies were a staple of UHF television. 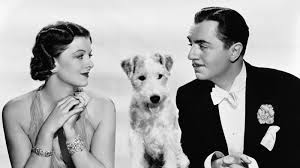 As played by William Powell and Myrna Loy, they seemed the ideal married couple, for their swank deco apartment, their frequent martinis, and exuberant wordplay.
I never had a swank deco apartment. The frequent martinis proved troublesome, and have long ago gone by the wayside. But my wife and I do manage a bit of wordplay, now then.
Particularly in the Chicago Botanic Garden, where we like to spend hours walking and talking. It's like being in heaven, and you don't have to die. We went twice over Labor Day weekend.
A favorite spot is the circular Rose Garden. Maybe because I had skipped my standard rose garden joke. "I didn't make any binding commitment to come here," (think about it) I felt poised, when my wife offered me the perfect slow pitch. 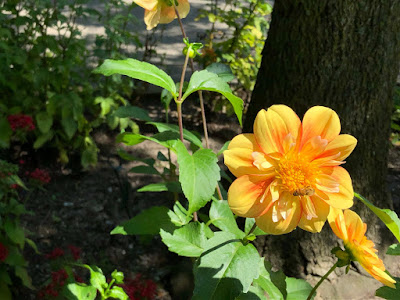 "Be careful for bees," she said, smelling a rose.  "They're out in force."
She could picture her husband swooping in to smell a perfect rose and ending up with a nostril full of bee. Sometimes my whole life seems like that.
"That's why they call them 'bees,'" I replied. "Because you have to 'bee careful.'"
Some might have groaned. You might be groaning now. But my wife thought that is funny, or has been conditioned to think that funny. She laughed, and then realized she was laughing.
"That's why you love me, because I'm easy to please," she said.
"No," I corrected her. "That's why you love me."
She laughed even more. 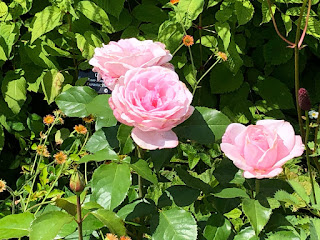 Okay, not Nick and Nora Charles. But we enjoyed it. And "I didn't make any binding commitment to come here" translates into "I never promised you a rose garden." A reference to the country song. Maybe it gets funnier after you've heard it 50 times. Maybe not.
Labor Day happened to be our 29th anniversary. The garden was mobbed, the line of cars backed onto Lake Cook Road, the parking lot jammed. Once inside,  we joined the wonderfully diverse crowd the Botanic Garden draws: black and white, Hispanic and asian, wedding parties and orchid societies, brides and quinceañera teens posing for photographs.
Usually, the throngs taper off quickly as soon as you get away from the front entrance. But not Monday. Even in the far reaches, the winding paths and well-wrought bridges were bristling with strollers: young couples, old couples, parents and young kids in strollers, large, extended families. Sometimes that's annoying. ("Hell," I like to say, quoting Sartre, "is other people.") But the weather was so perfect, I didn't object to sharing the Botanic Garden with the big crowds.
"I don't mind the other people," I informed Edie, as we walked.
"What other people?" she replied. 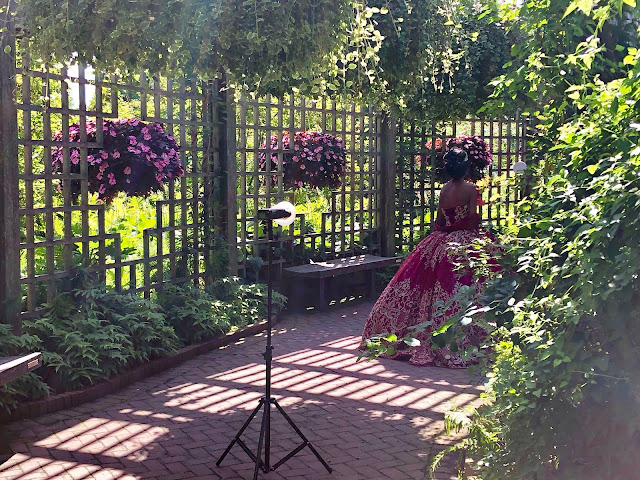