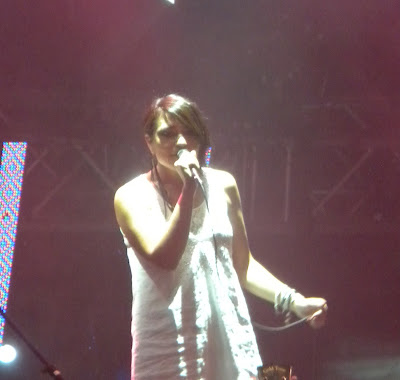 Yeah. Maybe you had to be there. Tom Waits is an acquired taste. But he's one of my favorite performers, with poetic words and creative, bang-a-femur-on-a-garbage-can music (though, if you haven't noticed already, with pop songs, its always words first, music second, though in opera it's the other way around).
"Ol' 55" it is, for Song Two. And while it isn't my favorite Tom Waits song — that would be "Hold On" or "Train Song" or "Mr. Siegel" — I think "Ol' 55" does it for its buoyant sense of the world being in my pocket. I feel that a lot, particular in regards to my wife, and so that's probably a better choice than, say, John Cale's version of "Hallelujah," which was also a contender.
And the third song? I'd be tempted to go with "Fallen" by Sarah McLachlan. No, too Lilith Fair. "Lust for Life" by Iggy Pop? More danceable, certainly apt. "I'm through with slipping on the sidewalk..."  But Iggy's, well, he's odd and scary and rolled around on broken glass onstage. I never liked him much. Lou Reed was more my style, his pinging "Satellite of Love."
Then it came to me. Certainly not a great song, in the great song sense. But one that I always loved, on a WXRT live compilation (one of the many songs fantastic live and flat in the studio), one my older son loved, as a toddler. Barely old enough to walk, he would rush into my office and demand it, and I would scoop him up and we'd dance. So there was that, plus a lot of philosophy, an attitude that twines together all the important aspects of my life, family, work, sobriety. And you can dance to it. It's by a local group, Poi Dog Pondering, a big, sprawling, multi-racial funtime band. So "Complicated" is Song Three, for its lyrics by Frank Orrall,  who, as an added bonus, was kind enough to permit me to reprint these lines in my next book, where they fit perfectly: