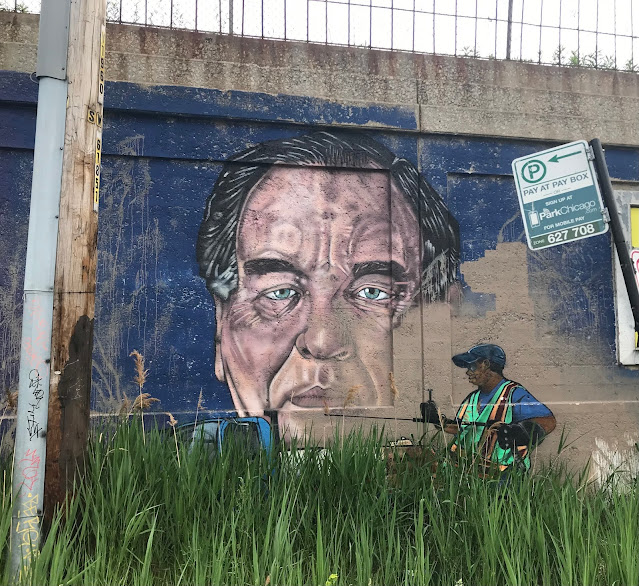 I sometimes wonder about Rich Daley's world.
He's still alive—it's easy to forget that. Seventy-nine, living in Chicago, supposedly. I imagine he has a circle, family friends, former cronies, underlings who hung around. People who made a killing from a Bridgeport connection, still paying court, out of habit, just in case. Various boards he sits in, a law firm he has some kind of association with.
And a legacy of ... what? Daley strained so mightily to escape his father's shadow, but never did. "Mayor Daley" is still his father, for bad or worse. Though Ritchie did help the city: bringing the 1996 Democratic National Convention, sprucing up the West Side. Millennium Park. Anyone who remembers the dismal expanse of rail yards that used to be right there, just past the Art Institute. It had to be done and he did it. And the Bean! Who doesn't love the Bean? All together now, "Thank you Mister Mayor!!!"
Sigh. The good is overshadowed by the bad, isn't it? The spectacularly bad deals he brokered, giving away city garages, the Skyway, the Chicago's parking meter franchise—many online got a kick out of the ParkChicago sign in the corner of this photo, taken by my pal Bill Savage, though he didn't even notice the sign when he was taking it. Sometimes, as I like to say, it's better to be lucky than good.
Traded for a handful of magic beans, scratching this year's itch, leaving next year's problems even worse. Though in his defense, the crises during the Lori Lightfoot administration have been so extreme we barely talk about the pension time bomb anymore. Not when the city is on fire and children are mown down by gunfire so frequently we've gone numb to it.
Just as well that Daley's gone off radar because, honestly, what could he add? His silence is a kindness. Besides, the man could be sitting right there, ready and eager to spill, and what good would it do? Trying to understand Rich Daley, as I like to say, is like trying to peel a ball bearing with your thumbnail. Try as you might, you just can't do it. Because it can't be done. I doubt the man knows his self himself. There might not be a self to know.
That's about it, just some words to go under Bill's cool photo of Daley's pinched, mournful mug being effaced by one of the Graffiti Blasters he created in 1993, into which the city pours millions of dollars a year to be a less colorful, less artistic place. (Not to go all in for graffiti. Much of it can be oppressive, threatening, some 16-year-old putz defacing a lovely brick wall. But the Blasters were notorious for going after ethnic murals, sometimes on private property, without permission of the owners and to the general outrage of communities).
Look above his right eyebrow. Is it me, or is that a pig face? A scowling cartoon pig? Just an accident, surely. It couldn't be intentional. Could it?