"Buy me some peanuts and Cracker Jack." 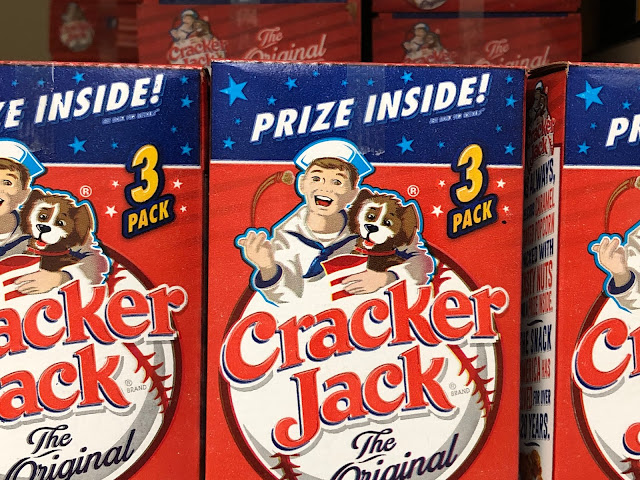 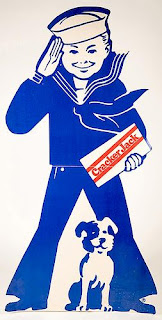 Change is hard. I get that. As one ages, slip-sliding faster and faster down that greased chute toward the tomb aka life in your 60s, it can be difficult to distinguish between a development that is an unacceptable deterioration, and something that is simply new and different.
Take a look at the new Sailor Jack, the mascot for Cracker Jack, above. I was trucking through Sunset Foods Friday and it stopped me in my tracks. He looks ... what? Like some 1940s tough who didn't make the cut for the chorus of "South Pacific." Crudely drawn, the dog with that same cross-eyed look that is the mark of bad cartooning. Maybe I was unduly attached to his predecessor, the cool blue stylized Sailor Jack at right, windswept, confident, snapping a smart salute, smiling serenely. Look at what he used to be. And then look at this slack-jawed jerk. Is this an improvement?
Our city does have a dog in this race. Cracker Jack is as Chicago as deep dish pizza. More. The company started in 1872 by a German immigrant, Frederick W. Rueckheim, part of the army of profit-minded entrepreneurs who raced here after the Great Chicago Fire.            He had a snack cart, and opened a shop at what is now Federal Street. He sold popcorn, peanuts and candied molasses, and for the 1893 World's Columbian Exposition decided to combine them all in one concoction, which he called Cracker Jack, the story goes, when a salesman sampled it and said, "That's crackerjack!" a slang superlative at the time.
Ruckheim put his 3-year-old grandson and his dog on the box in 1916, and the boy died, at 7, in 1920. His image was on his grave at St. Henry's Cemetery, but someone pried it off. 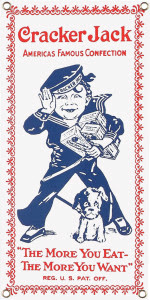 A big deal? No. Looking closer at the New Jack's right hand, it's almost as if he's flipping the bird to the customers, something Borden began doing when they replaced their actual toy prizes with crappy little booklets and stickers that no proper child would want, a practice current owner, Frito-Lay continues. Yes, to avoid choking lawsuits, but you can choke on a peanut too, and they still include them, or did, years ago, when I last bought a box. They famously skimp on the peanuts until the public complains, and they slip a few extra in.
Oh well. It doesn't matter, right? Nothing matters. If it's any comfort, the mascot used to be even worse: look at the red-cheeked monstrosity they used to use. It's amazing the product survived at all. They'll change him again, someday, maybe even for the better. That does happen. Rarely.
Cracker Jack has the best product placement of all time, inclusion in the deathless 1908 anthem, "Take Me Out to the Ball Game." You'd think they'd get this kind of stuff right. And maybe they do. Maybe the new, idiotic Jack image is in perfect harmony with our current, idiotic times. Maybe I'm the one out-of-step. I'm open to that possibility.