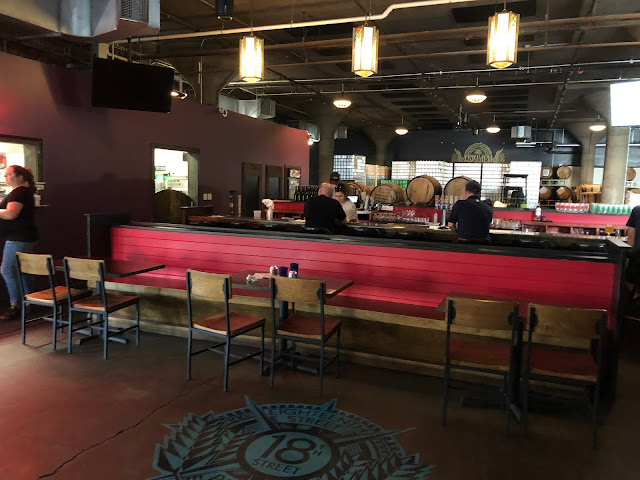 A good restaurant is a joyful thing. When someplace is rocking the food, the service, the atmosphere, it can make a person happy. Even though I dine out continually, I had forgotten just how much an eatery can supercharge your mood until Friday, when personal business took me to Hammond, Indiana.
Now Hammond, Indiana is not a garden spot of the world. Modest apartment buildings and town homes, low industrial buildings, a trailer park as soon as you exit the freeway. A lot of liquor stores and cigarette stores and fireworks stores. Not poor, exactly, not prosperous either. Proudly hanging on. My mission was to go to the Federal courthouse, a large brutalist gray concrete structure that could be used in a James Bond movie for the secret police headquarters in Bulgaria and the audience wouldn't blink.
It was lunchtime. My companion suggested Greek. I like Greek. "I could go for some kebab," I said. But a block or two away from the courthouse is a large brick building, The 18th Street Brewery. Which brings up a fourth important quality in the restaurant experience: luck. You need good food, great service, enjoyable atmosphere and a certain element of luck. A bit of good fortune to send you blundering across a place you didn't even know was there. Wherever this supposed Greek place was, it wasn't right in front of us, the way the 18th Street Brewery was. We went inside. 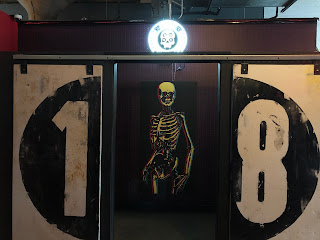 Hard rock music. What I think of as metal, though nowadays it might be called thrasher rock or some such thing. Not my normal tasse de thé. But it fit the place. A large room, ceiling painted black, tables, a bar beyond, a big empty expanse off to our right, and to the left, a bright outdoor area, all sunlight and flowers. It was a nice day, but I figured we'd get the full 18th Street experience inside.
Our waiter was Jerry, and he did everything a waiter is supposed to do. Greeted us in a friendly manner, showed us a table, fetched menus. A simple menu, beers on one side, with the requisite Götterdämmerung names: "Here Comes the Reaper," "Rise of the Angels" "Devils Cup"—I was in such a good mood, I could forgive the missing possessive. I liked that their "Daily Feature" was a cheeseburger, a beer, and an ounce shot of their 90 proof whiskey. Back in the day that would be my go-to move.
My companion got a Watermelon Gose, made in a nearby brewery, which he said was very watermelony. As a non-drinker, I had to settle for a Diet Pepsi, wondering if I should mention that, with all these odd varieties, banana & marshmallow IPA and such, they might consider coming up with an NA offering. They're all the rage. Or bring in Pabst NA, to harmonize with their can leitmotif. PBR NA rocks. But I kept quiet.
Not a wide range of food offerings—more a bar than a restaurant—divided into "BURGERS," including a PB&J Burger made with bacon jam and cashew butter, which now that I think of it, I should have tried. And "NOT BURGERS" such as Brisket Tacos, which my tablemate got, and Pulled Pork, topped with Carolina Gold sauce and pickles on a brioche, the obvious choice for me. 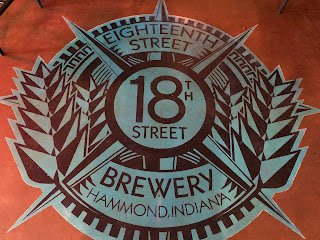 Waiting for our order, I looked around. I liked the place graphically, if that makes sense.  The skulls, the paintings on the walls, on the floor, the Gothic stained glass window salvaged from some church. It reminded me of Green Street Smoked Meats in the city: the same fun-to-just-be-here vibe. There's a place I love in Boulder, the Dark Horse, and this made me think of it. A Dark Horsey vibe.
A manager, Bree, swept over to check on us. I asked how old 18th Street is—seven years, she said, with outposts in Indianapolis and Gary. I was interested in the large space, lined with barrels, beyond the tables, and she explained how this is a working brewery and distillery, and while they do use it for events, otherwise they've got trucks coming and going bringing ingredients in and pallets of beer out. 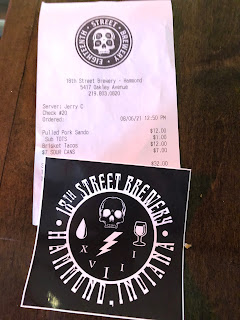 Our food appeared quickly, and here I fell down on the job, because the photo I snapped didn't come out. But they present a luscious pulled pork sandwich, the bun set half off the sandwich, displaying the meat, like a muscle car with its hood open to show off the engine. Plus tater tots, on a sheet of wax paper on an oblong metal tray. It looked delightful and tasted better. The pork smoky, the tots crisp. I have to write a post someday on why tater tots are superior to French fries, both for their crunchy-outside-pillowy-inside texture, and the fact they have "tots" in their name.
Okay, maybe I was just in a good mood—the day was unfolding unusually well. I was somewhere other than my office, working, and in good company.
When the bill arrived, it came with a pair of lagniappe—small gifts to seal the deal. Stickers. A detail, a nicety, something I expected from Alinea and didn't get. The three Michelin star place didn't even have a business card I could snatch as a souvenir. But 18th Street had these way cool stickers. A sticker is something you give a child, and these made the child in me very happy. What's that line of Robert Frost's? "Weep for what little things could make them glad." 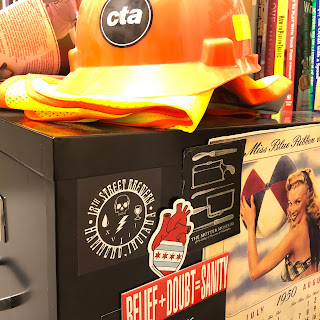 When I got my sticker home, I immediately put it in a prime location, on one of the Hon four-drawer black filing cabinets in my office closet. I never affix anything to those, but confidently  peeled off the back of this sticker and put it on, a memento of my perfect lunch at the 18th Street Brewery in Hammond, to which I extend my sincere congratulations. Excellence is never an accident. It takes a lot of thought and heart and work by a lot of people, and besides the money and success that often follow such effort, you also want someone to notice. I did.