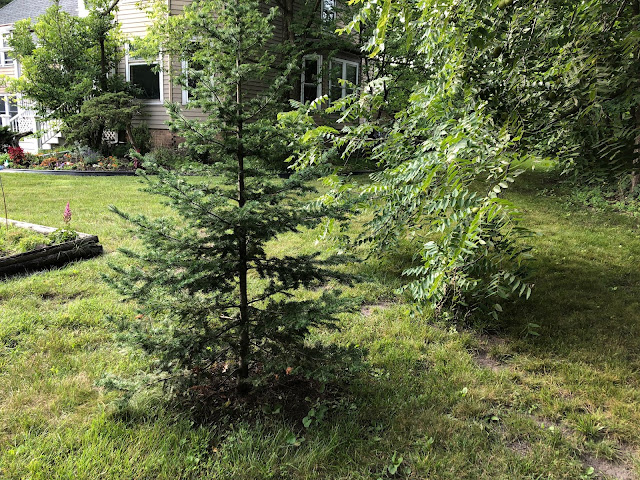 You never know when you are going to learn a new word, or a whole new concept for that matter.
The guy from Advance Tree Care was poking around our yard estimating what it'll cost to do some work—take out a dying pine threatening to topple over onto the back of the house, prune and treat an ash that we may just have shepherded past the waning emerald ash borer disaster. We found ourselves by this black hills spruce I had kidnapped from the property of my pal Rick Telander in the wilds of Michigan's Upper Peninsula. The tree grows like a weed and I like to point it out to visitors. The Advanced Tree Care man observed out how the black walnut nearby has grown toward it, and the spruce has shrunk away from it.
"The black walnut is allelopathic," he said. "Notice how the spruce has fewer branches on the side near the black walnut."
Ah. I hadn't noticed that. Plants developed 10,000 or so various chemicals that have nothing to do with their growth, per se, but part of a group called "allelochemicals," toxins that keep them from being eaten, or prevent pathogens from taking hold, or make the surrounding soil inhospitable to organisms other than themselves. Ironically, the compounds that give herbs flavor are mostly allelochemicals. They're basically chemical "KEEP OUT" signs designed to discourage the competition. More water for us.
And the black walnut—who knew?—is the Boss Daddy Bad Ass of allelopathic plants. It has a chemical called juglone that's so strong, it's used as a herbicide. Juglone is in the leaves, the heartwood, the bark, the roots, the nuts (causing their orange stain) even in the tree's Latin name, juglans nigra. The spruce is particularly sensitive to what the Morton Arboretum calls Black Walnut Toxicity, but my little tree seems to be placed far enough away that it isn't being affected, yet. Still, I'm going to go hack the black walnut branches away, and make sure the walnuts don't roll in its direction. Tree books encourage you to minimize the contact of black walnut debris with the soil.
My columnist's sense tells me there is some kind of allegory waiting to be drawn out of this—if our benign friends the trees are hardwired to poison the competition, well, that might explain humanity and its we-don't-want-you bigotries and stay-away biases. But I don't want to go there. We're smarter than trees, supposedly.