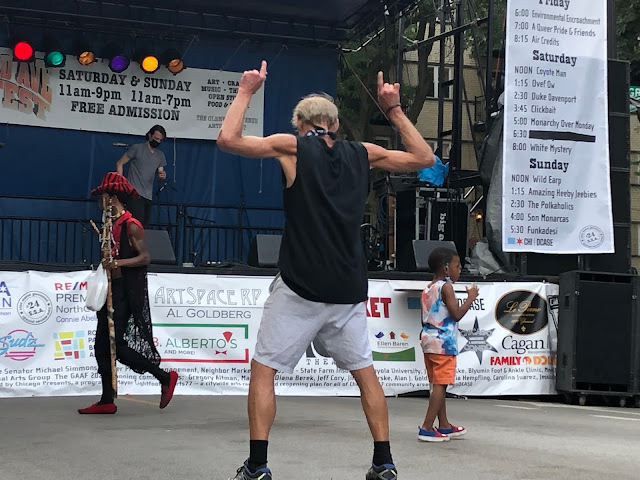 The Glenwood Ave Arts Fest began Saturday, drawing as always an eclectic crowd: Rogers Park locals, mostly, artists, of course, several politicians, couples with dogs, couples with children, young people and old people, white people and black people, street people and curious suburbanites, such as my wife and myself, who went because we always go. My brother-in-law, Alan Goldberg, helps organize it, and supporting your loved ones in their endeavors is what family does. You show up.
Besides, it's fun.
We cruised the booths and chatted with the artists, including a 14-year-old boy who caught my eye and said, "Come look at my paintings." So we did. I asked if the paintings, squares of color, had titles, and he improvised them on the spot for our benefit. I would have bought one for that alone, on general principles, but my wife nudged me onward and, figuring that disappointment is part of every artist's education, tried not to feel badly about it.
After an hour, we drifted toward the car, I suggested we park ourselves on a pair of metal chairs by the empty bandstand.
"I don't think there's an act until 4:30," my wife said. It was 4:10 now, and I understand that to mean, translated from the wife language, "Let's go."
"Let's sit," I said. "We don't just sit enough. It's summer."
So we just sat, watching children dance to the 1960s hits being broadcast from the stage. They were joined by a trim older gent, who danced by himself to several songs, obviously very pleased to be doing so, and we watched him dance too.
"This is the best part of the festival," my wife said, of the sitting interlude.
When we finally got up to go, I spied a gentleman in a red hat whom I had seen, from a distance, and of course noticed for his dramatic ensemble. He was about to dig into a plateful of dinner in a doorway, and after we passed him I pulled up, excused myself and went back and introduced myself.
"Can I take your picture?" I asked. He said I could. He produced his business card, and I produced mine, and we made the exchange. His says he is Tamarie T., and his band is Thee Elektra Kumpany and their genre is "Exotik Funk." I asked what instrument he plays, and he said he is the front man, and they would be playing at 6 o'clock. It was tempting, but we decided to slide up to Evanston instead for a bubble tea.  That was fun too, and we ended up walking in the sand at Greenwood Beach, holding our shoes, and I realized it was the first time I had set foot in Lake Michigan in three years, maybe more. Though if I could do it again, I might wait the 90 minutes and hear Tamarie's band play. Next time. 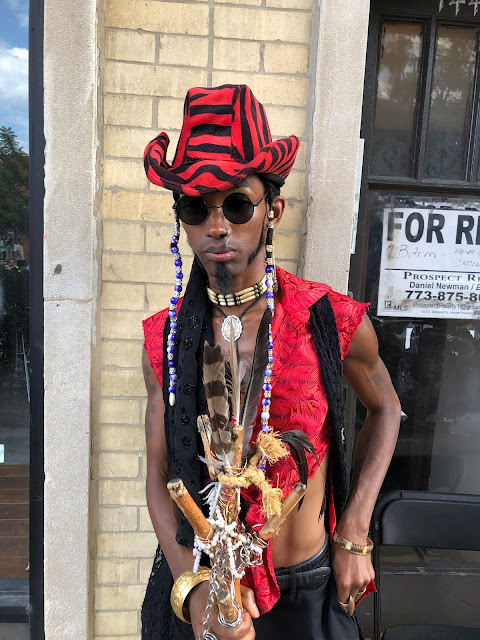