You have to chase Toni Preckwinkle. Anyone who has ever gone anywhere with the Cook County Board President knows that she doesn't waste time worrying about where you are. She hits the ground running, and if you don't want to lose sight of her, you better run too.  I've chased her several times through the Cook County Jail, on our way to bond court, and it's always an adventure.
This story originated with Preckwinkle—she wanted people to know what a mess the Cook County Criminal Courts are in, particularly bond court, and it's too bad that such a complicated problem had to be squeezed into 1300 words, but I'm sure I'll return to it in the future. I also had to give space to Chief Judge Timothy Evans' view of the situation. He's a nice guy, but not, as far as I can tell, a dynamic agent for change in the legal system. Criminal court would be an enormous problem to address even if everybody were on board, and they're not—as usually happens in politics, some people care more about protecting their turf than about the bigger picture.
Here's my story in Wednesday's Chicago Sun-Times:

Time is money, the saying goes, and if you want to see a real life example of how days and weeks add up to some serious green — while endangering civil rights in the bargain — look no further than the Cook County criminal court system, whose bond court, through a combination of inefficiency, resistance to change and harsh prosecution, costs millions of dollar the county can’t spare. 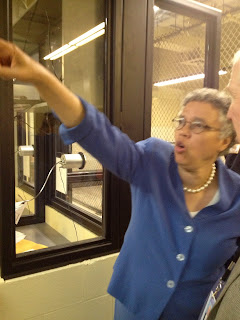 At least according to two top Cook County officials.
How much money? Try about $80 million a year, which is spent housing prisoners who either should be let go pending trial or convicted and sent to state prison, but are stuck in Cook County Jail due to poor case management.
“It takes us so long to dispose of serious cases that we save the state $70 million in prison time, but it costs us over $300 million because the jail is so much more expensive than prison,” said Cook County Board President Toni Preckwinkle, who has been trying to reform the criminal system, particularly bond court, where accused criminals are assigned a cash amount to allow them to go free from jail while their cases are pending.
That $300 million figure represents the entire jail operating budget. To get a figure of how much of that spending is unnecessary, examine the head count at the jail, which has about 10,000 inmates a night, plus 2,500 on electronic home monitoring.