When politicians play with trains... 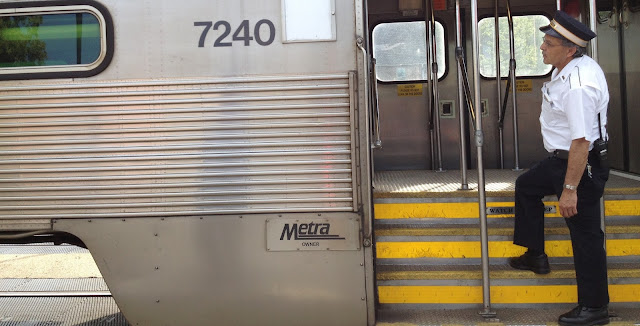 Morning at the station.  Soon as Mr. Train shows up, we’ll be on our way.
Sure, Metra has troubles. Who doesn't? Money woes. Management sunk in bad publicity hell. Some lines are chronically late. But not mine. My Milwaukee District North Line runs like clockwork, for the most part.
Not that I’m without complaint. The announcements, for starters.
“Attention,” the generic male voice begins. “The next inbound train to Chicago is now arriving in your station.”
Usually, a bit of a lie, that "now." What they really mean is, look far down the track, a train will hove into sight any moment. Not quite "now." But close enough.
And that last part — “in your station.” I really hate that. For its superfluity. As if we might be wondering how other trains heading for other stations might be doing. For its fake chumminess. Like the cheerful greeting of a panhandler hitting you up for coins. “Hey chief, nice suit. Spare change?” A false familiarity, like those cheap custom-order children’s books peppered with a specific child’s name, always seeming to feature the same crude polka dotted character, a blend of polar bear and duck, expressing unqualified love for the recipient child. “Golly        Jacob  ,  I just am so glad to be your friend....”  Even when a child myself, I pitied children who owned those books, whose parents -- or, more likely, grandparents -- were vapid enough to buy them, who didn’t know enough to get Sendak and Seuss and books of quality. Who felt so happy to read their kids' name, over and over, they missed the essential fact that the books were crap.
"In your station." That's Metra's whole problem, in a nutshell. They think the riders are idiots.
But we're not. We could accept an announcement that ended  “is now arriving.” Period. No need for "in your station." That's what they’d do in France. "Est maintenant arrivée." Enough and no more.
It gets worse. After the meaningless back pat, the true mystery. “For your safety, please stand behind the yellow line until the train has come to a complete stop before boarding.”
Really? Are we that dumb? We need to be told to wait until the train stops before trying to get on?
“Another feller went under the wheels, Conductor Clem, climbing aboard a moving train.” Are people really that frantic to get to their joyless jobs downtown? Is this warning really necessary?
I suppose so.
“Don’t try to board until the doors open,” is shorter, but pushes the needle even further on the old people-are-idiots meter.  I would vote for something more positive —  “Please stand back and let departing passengers off before boarding.” Shorter, and would help avoid an unfortunate circumstance far more common than overeager commuters trying to scrabble aboard moving trains: incoming riders forming a tight knot around the doors, blocking those trying to get off. A little canned  manners lesson would have the effect of keeping people from flinging themselves under the train — you can’t grab a moving rail if you’re standing back — without raising the specter of dismemberment.
Of course, the fine points of track announcements are of no concern to Metra honchos at the moment, as they try to climb out from the very deep hole they've dug for themselves. My column in the Sun-Times Friday:

Metra outside counsel Joseph Gagliardo probably did not mean to summarize exactly the sort of cronyism that has plagued the railroad for years.
But he did, and in a dozen simple words.
“Elected officials don’t lose their First Amendment rights to talk to people,” he told State Rep. Deborah Mell (D-Chicago) and her House Mass Transit Committee at a meeting Thursday intended to call the Metra board and its very expensive former CEO, Alex Clifford, on the carpet.
The elected official Gagliardo was referring to is Michael Madigan, Illinois’ all-powerful Speaker of the House, whose Chicago office was only steps away. And the talk in question was Madigan’s 2012 request that a friend of his working for Metra and — Gagliardo stressed — does a super job, perhaps was underpaid.
“Speaker Madigan inquired about a raise for an employee,” said Gagliardo. “It’s not inappropriate for an elected official to inquire about a wage increase for somebody. It’s not based on politics . . . Mr. Clifford viewed the request as political.”
Well, yeah, unless Mike Madigan is part of the ordinary salary review process at Metra, then it would seem that way. Gagliardo tried to simultaneously imply this was nothing unusual and also something Clifford should have reported to the board immediately.

To read the rest of the column, go to: 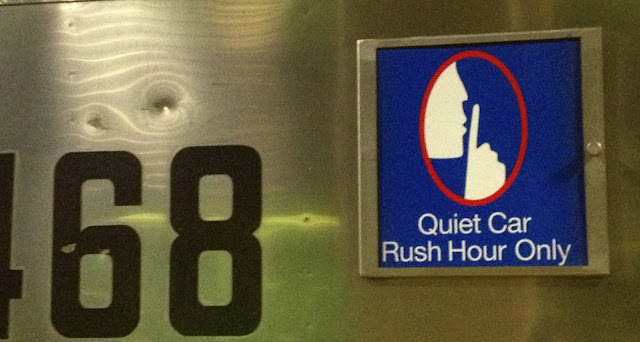