During our first year in the house, we slept on a mattress on the floor, using cardboard boxes as dressers, while searching for a bedroom set we both liked and could afford. The overall rat's-nest effect was not pretty. "We live like drug addicts," I told my wife, "without the benefit of drugs."
That phrase returned to me this week, as we marked the third month since workmen arrived and sealed off our kitchen. Things are starting to fall apart. The dining room looks like those rooms in homes where a tornado has taken off one wall--a jumble of boxes and dirty dishes and plastic bread bags and clutter. We've stopped taking things that don't absolutely have to be refrigerated to the refrigerator in the basement, 19 steps away. I don't know what happens to natural peanut butter when it goes bad, but I have a hunch we're going to find out.

I almost wrote that work has been going on "three months, with no end in sight," but the truth is worse than that. The end is in sight, right there, tantalizingly close, like a platter of food left just out of reach of a prisoner starving to death. The cabinets are in. They look great. The appliances are in, if not quite in their proper spots. The mighty Wolf stove looks fantastic--I've never been so happy to toss money away on extravagance--sitting in the middle of the kitchen, like a god.
It seemed as if everything was about to wind up. A week, maybe two. Then it didn't. The workmen stopped coming. ("There isn't enough for them to do," my wife said, and I made a little guttural animal noise and swept my hand toward the unfinished kitchen).
We're waiting--for the granite countertops, which should be ready any day, unless of course they're not. For the frame that was supposed to arrive with the window, but didn't. And for the knobs . . .
Cabinets need knobs--drawer handles, something. We've known for months that, at some point, we'd have to pick out knobs, but we were in denial. We just didn't do it. Now, having gone looking at knobs, I know why. There are a million kinds of knobs--no, a million billion zillion--made from every material known to man. Wood, stone, ceramic, metals from gold to iron. 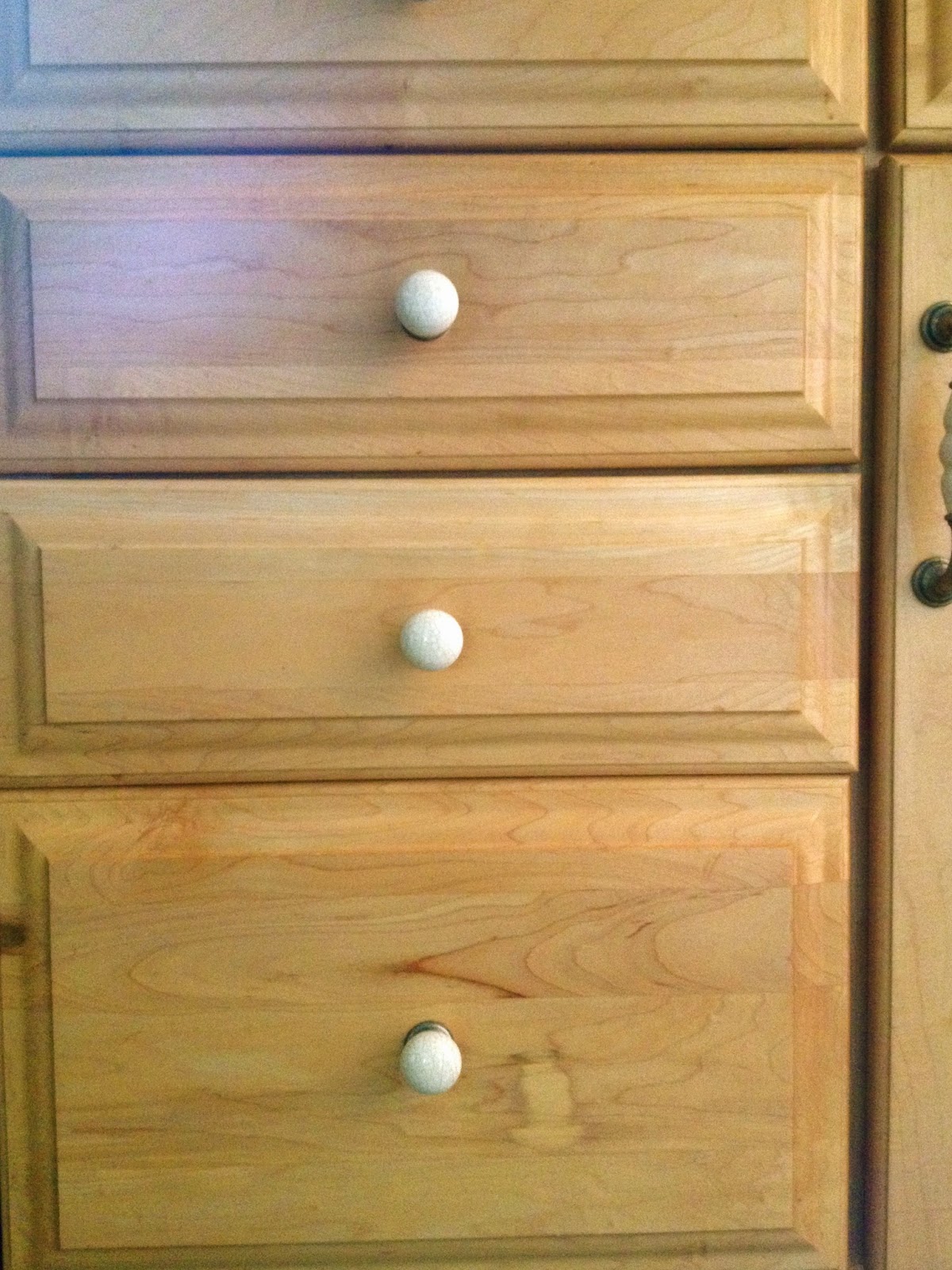 We were in this one store, Designer Kitchen Something on Touhy, that must have had 2,000 knobs on display, and my wife spent so much time looking at them I considered slumping to the floor and dying of exhaustion and hopelessness.
Knobs also cost a bundle--who knew?--and since we need 37 of them, for our various drawers and cabinets (and that's with deciding that the 14 top glass cabinets won't need knobs, since we're not using them except to display all the expensive stuff we got for our wedding and never use because it's too nice to be pawed over by the likes of us and our friends) every dollar spent on a better knob is multiplied by 37.
I would have happily bought 37 of the brushed nickel football shapes that Home Depot was offering for $3.99 a crack. But no. The search--through numerous stores, in the suburbs and city--reminded me of the hunt for an engagement ring, when my wife-to-be, in what would enter family lore, managed to visit every single jewelry store in the city of Chicago, examining every single ring set, at least in my perception.
I had only two convictions, knobwise. First, nothing cute. No tiny forks and spoons as drawer handles, no sunflowers, no teddy bears. Cute, I learned long ago, is what you get sick of before the cashier finishes ringing up the sale. And second, no new colors. My wife was ogling some copper knobs, which were indeed quite pretty, but since nothing else in the kitchen is copper, I put the kibosh on them. Maybe that's a failure of imagination on my part.
Now that I begin to set it down, the Knob Odyssey is actually too lengthy and involved to present in a column--it would fit better in a Moby-Dick sized novel. Though I feel bad withholding my racing to Home Depot to beg a clerk to unscrew a certain handle from the display so my wife could see it in situ in our kitchen. He did, charging me $50 ransom to guarantee I'd bring it back, a figure that is not really all that Draconian, since the handle itself costs $20 (and $20 x 37 is. . . .)
There was one bit of progress this past week, which I almost blocked out for reasons that will become clear. The lights were hooked up. Installed by a crew of extremely malodorous Russian electricians, who followed another Slavic crew (apparently, only Russians are allowed in the electrical trades in Chicago) who installed the countless electrical outlets that Northbrook code requires.
They did the typical fumble-thumbed, fine-for-Smolyensk-but-not-so-hot-here job. The electrical outlets don't all match—they're different types, as if they grabbed whatever was handy. Not a big deal, but when you're pauperizing yourself you tend to notice these things. And worse, to me, the light switches don't toggle the same way. Meaning, that on the pair of switches by the door, toggling one up turns a set of lights ON while toggling the one next to it up turns its lights OFF.
"They've got to change that," I said to my wife, my eyes watering from all the BO that had been vented into the kitchen like radiation off Chernobyl. I actually worried that we wouldn't be able to eat there—that the smell of armpits that haven't been washed since Gorbachev retired would corrode the stainless steel and seep into the crevices. We'd have to have the place fumigated.
"You should have smelled the other crew," my wife said, in the flat, 9-yard-stare tone we use now to discuss kitchen matters. "They were worse."
So there's where we are now. Plagued by body odor and near enough to the end that at first, giddy with optimism, I predicted completion in two weeks. Now I'm thinking more like two months. Maybe.
—Originally published March 16, 2003