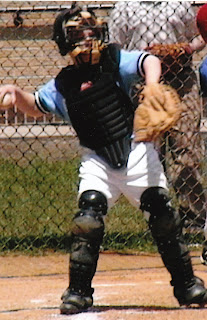 My younger son Kent turns 18 today, and this week I've been looking back at his appearances in the newspaper over the years. An editor at the paper liked this so much he framed it for me — it's the only column of mine I have framed on the wall. A reminder that, if we're lucky, we learn from our children as much as they learn from us, if not more. I was never into sports as a kid—I wasn't very good and wasn't willing to get good. Kent played basketball, baseball and football, and through him I got a whiff of the sports experience I missed. I've been watching the Bulls games for the past five years because he does, and I the only regret I have is that they didn't win the championship, yet.  And then there was this, when he was 10.

All spring, my younger son, Kent, wouldn't pitch.
"Your team needs you," I'd say, as we played catch in the back yard.
No.
"You've got a great arm."
No.
"You're just afraid."
No. "I just don't like pitching, Dad," he'd say.
I'd open my mouth, then close it. Shutting up is a lost art. Particularly among dads. You talk and talk, spewing advice and wisdom, because you can, and you forget that sometimes you just need to zip it.
So I let it go. You don't want to pitch? Then don't pitch. The season passed. Fourth grade is a sea change from third grade in the Northbrook Instructional Baseball League. The kids who gingerly approach the plate as if living out their worst nightmare and never get a hit are pretty much gone by now.
In third grade, you're surprised if a fielder catches a fly ball hit to him. In fourth, you're surprised if he misses it.
The pitchers, who could barely find the plate last year, now have their own personal styles. There is much grace in a 9-year-old pitcher's wind-up. Much — dare I say it? — beauty. Like a Balinese dancer, they join mitt and ball together over their head with ritual slowness, bend both elbows, the gloved ball sinking slowly back as if of its own weight, while a leg goes up, coiling and firing the ball to the batter.
The batters, too, have their own stances. My son's batting stance has a rough-and-tumble, Pete Rose majesty, his cap askew, tapping the plate, impatient, sometimes giving the bat a quick, bring-it-on twirl, sometimes a Casey-at-the-bat, slugger's glance of contempt in the pitcher's direction.
I tried to burn the image of that stance into memory, particularly after he announced he wasn't going to play baseball next season.
"I wish you'd reconsider," I said. "I really enjoy going to your games."
No. He prefers tennis.
Tennis.
Again, I tried to keep my mouth shut. I decided to focus on what was left, savor every game I could. Though that old song murmured in mind as he put on a batting helmet and walked to the plate: "It was a long time coming, it'll be a long time gone."
Then the team won a close game. Kent scored a run and made a solid defensive play. Which seemed to shift his mood. After the big win, still in his uniform, he asked me to play catch, which was unusual.
He zipped the ball in. Not a casual toss, not a lob, but a screaming fastball. I considered making a rueful comment about pitching, but again kept my yap shut. A lost art.
What I did, instead, was silently lower into a catcher's crouch, my gloved hand straight out in the strike zone.
He fired the ball. Thwap!
"High," he pronounced. A few more throws — one low, bouncing two feet in front of me, ricocheting right up into, ummm, a part of the anatomy you don't want a well-thrown ball to hit.
"Sorry, Dad," he said as I shook it off.
More pitches. More silence.
"Maybe we could get one of those pitching nets, with the target, that bounces the ball back to you," he said.
"What for?" I asked.
"I thought I might pitch next year," he said.
Toss and return, toss and return.
"I thought you weren't going to play next year," I finally said.
"I am going to play," he said. "I changed my mind."
I stifled a whoop, groping instead for a Clint Eastwood concision.
"Good," I said. "I'm glad."
Another pitch.
"You pitch next year, I'll get one of those practice nets . . . and a real catcher's mitt, for myself. And a cup, too—also for me." We both smiled.
The night before the last game, the coach asked the boys if there was anybody who hadn't pitched in the playoffs who wanted to. Kent looked at me and I pantomimed lifting a finger. He raised his arm.
"Steinberg?" chuckled his coach — Jeff Simon, by the way, a first-rate baseball coach. "You don't pitch all season, and now you want to pitch in the playoffs?"
He made a note on his clipboard. And before the last inning of the last game, he came over to me.
"Warm him up," he said, and walked away. I scrambled to grab somebody's mitt, and we worked at the side of the diamond. I think you had to live my kind of life, to be as distant from sports as I am, to understand how much I enjoyed the next few minutes. An unexpected gift.
With two outs in the bottom of the last inning, the coach waved Kent in.
He walked to the mound and struck him out.
—Originally published in the Sun-Times, June 20, 2007
Posted by Neil Steinberg at 12:00 AM