Why the Gay Parade is not only fun, but important. Still. 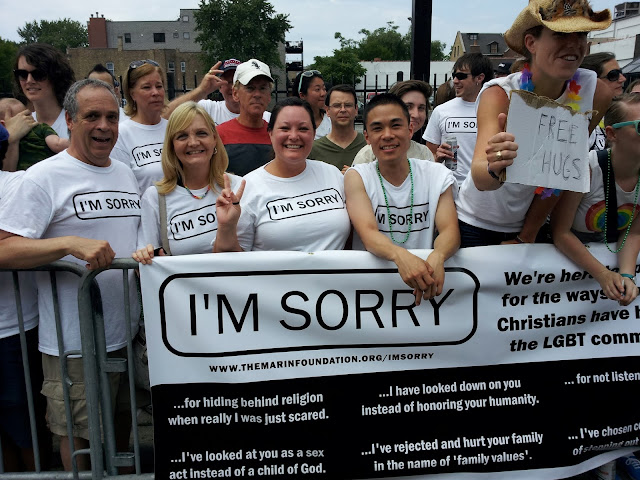 On Friday, the Supreme Court recognized the right for gays to marry throughout the 50 states. Make sure you don't miss the laughable legal somersault John Roberts does in his dissent, basically saying that acknowledging this Constitutional right deprives each state the joy of crawling toward that realization on their own. Boo-fuckin' hoo.

Sunday is the Gay Pride Parade, and while the ruling guarantees it will be an extra joyous one, at some point someone will ask, "Hey, now that this right is finally won, do we really need to march?"
I'll field that one.
Short answer, yes, as laid out in a column about the 2011 parade (which, sharp-eyed readers of my Chicago memoir, "You Were Never in Chicago," might recognize as the parade that appears at the end of the book).

When I told a neighbor that I would be riding on a float in Chicago's 42nd Gay Pride Parade Sunday, he grinned giddily, fluttering his fingers in front of himself and trilling an effeminate "hoo-hoo!" noise that I guess was supposed to be an imitation of a gay man.
And some wonder why there's a parade . . .
I didn't correct him or challenge his thinking. "Gee Biff, that offends me and offends the dignity of gays, lesbians, transgendered, bisexual and non-determinate people everywhere." That isn't my style. Too timid. I even may have laughed along, shamefully, caught off guard by this sudden ugliness, and stymied by the conviction, had I argued, that rather than shift his view of gays ("Gosh Neil, thanks, I just never thought about it in those terms...") I'd just tar myself as a humorless ideologue in the thrall of the gay agenda.
Which I'm really not. To be honest, I couldn't care less about other people's sex lives, and it also shocks me that there are those who do, passionately, feel that the Lord God Almighty is ordering them to stick their big bazoos into the personal business of others.
Don't they know their history?
It didn't start with gays, you know. Remember bastards? It's a general, low-level insult now, but once it was a specific legal term—a man born out of wedlock—with implications regarding his right to inherit property and marry. The rules are in the Bible.
"A bastard shall not enter in to the congregation of the Lord," Deuteronomy 23:2 tells us, "even to his tenth generation shall he not enter into the congregation of the Lord."
Society doesn't fret about bastardy anymore. Ditto for divorcees. Things change.
Gays are next in line to be let off the Bible-based hook, and it's been fascinating these past 20 years to see them shedding their pariah status. As with previous biases—against blacks, against women—the iron law began to melt. When I joined the paper, we wouldn't list a gay partner as a survivor in an obituary, not even if they had been together 30 years. It was policy. Kind reporters would get around that by quoting the survivor as "a longtime friend." AIDS changed that; with so many gay men dying, denying them this final shred of dignity seemed pointless and cruel. And now New York State is allowing gays to marry.
Among the first people I talked to Sunday after I joined the throng pouring from the Belmont L station was Kelly Cassidy, state rep from the 14th District. She told me that someone had broke into the warehouse where the parade floats were stored last night and slashed the tires of 51 floats. I replied that this had to be a hate crime.
"It's hard not to think so," she said. "After the huge victory in New York, with so much to celebrate . . . The first parade had no floats. There were no go-go dancers. We don't need floats to have a great parade."
The vandalism discouraged no one whom I spoke with. The general opinion is that Illinois will follow New York in legalizing gay marriage.
"It's going to be coming soon," said Jacob Meister, founder of Civil Rights Agenda, an advocacy group whose float I rode on.
I thought of the Nazis who had gathered outside the dedication of the Illinois Holocaust Museum, unwittingly underscoring the need for such a place. Ditto for the slashers—a grim reminder that gay people don't march in the street once a year because they're exhibitionists. During the AIDS crisis, they were marching to save their lives, and now they're marching to insist that those lives and loves have as much worth as anybody else's.
Seeing the parade from a float was pure fun. The whumping Lady Gaga music, the sea of waving, smiling, joyous people—gay and straight, young and old, every color, everyone having fun. I waved and clapped and yes, shimmied a bit. How could you not?
Correction: not everyone had a good time.
"Repent heathens repent!" a man yelled through a loudspeaker. "God hates all of you! Jesus Christ hates every single one of you! Homosexual sex is demonic sex! You're demons!"
This wasn't the Westboro Baptist Church, but the Street Preachers, sort of a Westboro Wannabe. A bearded man among them asked me if I believed what the speaker was saying.
"No," I said.
"Why not?" he demanded.
I paused, thinking. "It's like what Louis Armstrong said when asked to define jazz," I said. "'If you have to ask, you'll never know.'"
That seemed to puzzle him, but I walked away and left him in his confusion. My job isn't to take every idiot by the hand and try to make him see the light. That said, the next time somebody does one of those pinky-lifting lisping bits, I'm going to assume the most steely glare I can and say, "That's not funny."
—First published in the Sun-Times, June 27, 2011
Posted by Neil Steinberg at 7:06 AM