What to Do With Louie, Revisited 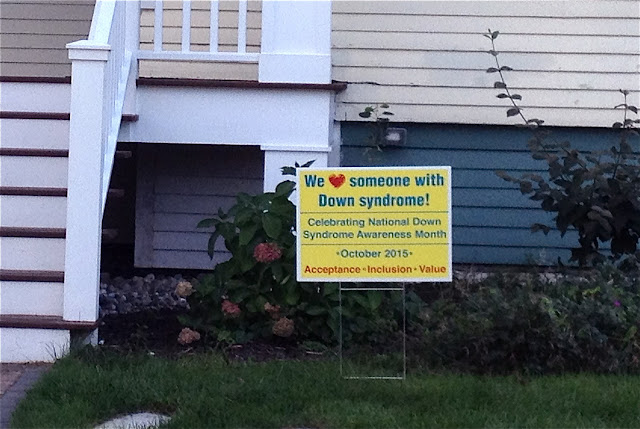 A family on the next block put up this sign in their yard — actually a number of them. Which made me think of Louie Herrera, a 28-year-old man who lives in Elmhurst with his family who, coincidentally, have a similar sign in their yard.
I met Louie and his family six years ago, after his mother wrote to object to a piece I had written about Misericordia, the home for people with developmental challenges. Those kids would be fine, she suggested. But what about her son, who had just turned 22 and thus was no longer eligible for state services? I think she was surprised to hear back from me, and even more surprised to find me in her kitchen shortly thereafter. 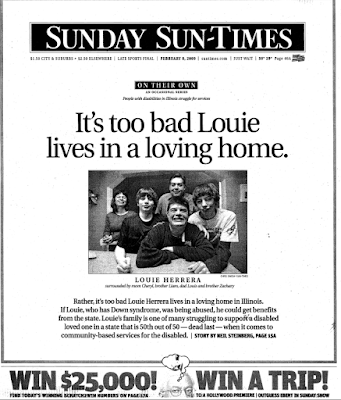 If Louie Herrera's parents beat him, if they abused or abandoned him, then he'd be all set: The State of Illinois would be able to swoop in and see that Herrera, who has Down syndrome, was placed in a large, public facility that could offer structure -- supervision, classes and work experience -- to help him live a full life.
"That, unfortunately, is true," says Lilia Teninty, director of the Division of Developmental Disabilities for the Illinois Human Services Department. "We have 'crisis criteria,' where, if people need that, we immediately put them into services. Beyond that, we don't have a lot of flexibility in adding services."
Alas, Herrera is not in crisis. He is the "heart and soul" of a tight-knit, loving family in Elmhurst, which, unfortunately, happens to be in Illinois, thus creating a further difficulty.
If Herrera lived in another state, he might be able to avail himself of services from a small group home or shelter workshop located in his neighborhood -- in Michigan, 82 percent of people with developmental disabilities are served in such settings. In Illinois, the figure is 30 percent, making it dead last -- 50th out of 50 states, right behind Mississippi, Louisiana and Arkansas -- when it comes to supporting community services for people with disabilities.
Scarce Illinois resources are focused on large facilities, and even those are hard to get. People with disabilities who are trying to find whatever help is available in Illinois go on a waiting list to be evaluated. That waiting list currently has 16,000 names on it.
"We don't have enough money to serve them all," says Teninty.
That's the bad news.
The really bad news, for Louie Herrera, is that his name isn't even on the 16,000-person waiting list. His family has been told that now that he has become an adult -- his 22nd birthday was Friday -- he is officially on his own, and the state cannot give him even the hope of any kind of assistance.

Louie Herrera is a broad-shouldered, sturdy young man with a ready smile. Though some of his tastes mirror those of his peers -- he plays and coaches basketball and enjoys cooking -- his musical preferences are unconventional for someone of his age.
"I like watching the Wiggles," he says, sitting in his mother's tidy kitchen, with its rooster motif. "I like 'Hannah Montana.' "
Herrera was born with an extra 21st chromosome, a condition commonly called Down syndrome. Because of that extra chromosome, he exhibits a range of traits, including almond-shape eyes, a percussive manner of speaking and an IQ of about 50.
I met Louie because his mother, Cheryl, wrote to me after I ran a column about Misericordia, the large Catholic facility on the North Side for people with developmental disabilities. She said that such places are fine, if you can get into them. But what about all those thousands of people who can't get in? Or those who don't want to go to a large setting and live with hundreds of people?
The Herreras would prefer Louie to stay at home, where he has always been, and where most people with disabilities -- where most people, period -- prefer to be. But finding someplace nearby that welcomes someone like Louie Herrera can be next to impossible.
"We've been finding a lot of these shelter workshops have been closed down as a result of funding," says his father, Louis Herrera. "Even if you do find a slot, you have to pay for it."
Their search has been mirrored statewide. The struggle between a system that favors large institutions and the trend toward small community homes is a central concern for the disabled community.
"This is not just about service, not just about a system that supports institutionalization vs. community living," says Marca Bristo, CEO of Access Living, a Chicago advocacy group for the disabled. "This is at the heart of our civil rights struggle."
"Civil rights" may be a phrase not much associated with the disabled, but courts have increasingly viewed their situation in that light — the landmark 1999 Supreme Court Olmstead decision said, basically, that forcing citizens to receive care in large facilities when they prefer not to is a form of discrimination.
"We see so many people, especially young people, who have no business in nursing homes, ending up in them," says Bristo. "Some go in for short-term stays because they have some medical issue that needs to be addressed, and they never get out — and they never get out because of the way our public financing system is set up. It doesn't support community-based living. It's an individual's battle to find their way out."
Battle is the word. Cheryl Herrera gave me a thick stack of photocopies of the letters, forms and reports she either sent or received trying to find a place for her son once he turned 22 and could no longer go to Elmhurst schools. She works as a substitute teacher, her husband as an accountant, so paying for Louie's care themselves is not an option. Yet leaving him at home would be like parking a 7-year-old in front of the TV for nine hours a day and hoping for the best.

Those who are not related to someone who has Down syndrome, who have never met one, might automatically be put off by their outward appearances and thus may fail to grasp how loved they are as individuals by their family and friends.
"Louie is the heart and soul of the family," says his father. "He has an outgoing, extraverted personality and is so pure in his nature and how he views things. So many people are touched by him when they meet him."
One of those Louie Herrera touched most deeply is his younger brother, Doug.
"People have misconceptions about everything having to do with special needs," says Doug, who's 19. "They look at them and see someone who's different, someone who drools or walks funny. They're too timid to actually get to know them."
A sophomore at Illinois State University, Doug Herrera is studying special education and plans to spend his career working with people like his older brother.
"I've always looked up to him," Doug Herrera says. "Through him, I've gotten to know a whole bunch of people with other disabilities, growing up and meeting his friends, hanging around his classrooms. I was always involved with people with special needs, always able to work with them. It's a rewarding job, and I really developed a passion for it."

Update
The deep cuts to state programs since this was written have not affected the life of Louie Herrera.

"He's actually doing pretty good," Cheryl Herrera told me Monday. "He does a couple of programs; right now he's doing one through Gigi's Playhouse, out in Hoffman Estates, three days a week.  It's a little far, but we're managing. Two other days he's at Monarch, through Ray Graham, and in that one, he's really out and about in the community."
When we spoke on Monday, they had just gotten home from the library.
"Louie likes the library," she said. "We go once a week."
Louie also works one day a week at a local camera shop, Elmhurst Photo on Spring Road, helping to clean and handle small tasks.
"He feels very useful," his mother said.
His brother, Doug Herrera, who was studying to be a special education teacher in 2009, is now 26 and doing just that.
"He works with really significantly-challenged kids at the Kirk School in Palatine," his mother said