Last week I had an exchange with a supporter of unlimited gun access, whose hostile tone changed dramatically when I mentioned that I had fired guns. I guess that put me on the good guys' side. I posted a photo of myself shooting at the FBI range, and another commentator assumed that was the only time I've ever fired weapons—a way to nibble away at my gun cred, I suppose. It wasn't. I wrote a series of column items in 2007—the column filled a page then, and tended to be broken into smaller bits—about getting my FOID card and taking my boys shooting. Understand, it's madness, in my view. Ideas don't gain or lose legitimacy depending on how much ammo the person espousing them has fired. Still, I thought I'd post them here, the first part today, the second tomorrow, so I have something to calm gun zealots with next time the issue comes up, which it will.

Applied this week for my FOID card — that's "Firearm Owner's Identification" for you who are not in the gun world.
The form takes a minute to fill out — though I paused at question 10. Does "Optional Numbers" mean I have to put down my Social Security number or not? I figured "optional" is an out for the black helicopter crowd. So I wrote the number down.
Cost me $5 and a recent photo—the form says it takes 30 days and I'll have my license and be all set.
Regular readers of this column might find this an unexpected development. I have in the past written that guns are dangerous and that certain new gun laws are desirable, such as one banning .50-caliber rifles, which are good for shooting down planes and not much else, or laws that would keep individuals from buying two dozen handguns at a time, to cut down on sales to street gangs.
That makes me a bed-wetting, liberal, gun-banning weenie in the mind of the National Rifle Association, whose members have "The right to bear arms shall not be infringed" part of the 2nd Amendment tattooed on their necks, but keep conveniently forgetting the "well-regulated" that comes right before it.
To me, enjoying guns and a reasonable public gun policy are not mutually exclusive. Banning machine-guns is not a step toward a police state, and wanting to doesn't make me anti-gun. I've gone pheasant hunting, and skeet shooting, and fired a handgun a couple of times. Guns have an allure and shooting is safe and fun, done properly.
So when my 11-year-old son announced Sunday that he wanted to shoot a gun, my response was to jump online and find out the quickest way to get him on a range.
Gun shops ring the suburbs. They'll rent you a gun and sell you ammo, and a child can shoot if in the company of a parent, provided the adult has an FOID card.
Hence the application.
If nothing else, shooting will be something the boys—both want to go now—remember. My father was a government scientist who spent a lot of time in places like Geneva and Johannesburg and London. We didn't do much stuff together. But one day in 1974 we did stand around for an hour or so at the Broadmoor in Colorado Springs and blow clay pigeons out of the sky. It felt very adult to tuck a shotgun under my arm, to bring it up to my shoulder, and sight the target. I can hardly wait.
— Published in the Sun-Times, March 9, 2007

OPENING SHOT . . .
The list of victims from Monday's Virginia Tech massacre is not complete. Other innocents will also be harmed by this.
There will be, for instance, troubled youths on every college campus who reach out for help and instead get their fingers burned.
Even before this, universities were overreacting and suspending students after they sought treatment for depression.
Now, with the specter of slaughter haunting already timid college administrators, we can expect more kids will find themselves on the bus home after making the mistake of approaching a counselor.
That isn't right. Combine the pressures of a new place, the stress of college coursework, the frequency of substance abuse, the pain of complex romantic lives, and a significant slice of any campus is on shaky mental ground.
The last thing we need to do is make it harder to acknowledge this, to boost the stigma aimed at emotional troubles and the tendency to blithely pretend they do not exist.
I remember sitting in the waiting room at Northwestern's mental health center when a girl I knew walked in.
"How's everything?" she asked.
"Great," I said. "And you?"
"Oh great," she said. Our eyes met and we burst out laughing because, really, if everything was so great, what were we doing there?
If we place the suspicion of being a potential spree killer upon everyone who stops by the nurse for a brochure, we will inevitably add to the roll of Cho Seung-Hui's victims.
No gun for you!
I got my firearm owner's identification card simply to take the boys shooting. But with guns in the news, now also seemed an apt time to head to Maxon Shooting Supplies & Indoor Range in Des Plaines. I went alone, without the distraction of the boys, as a dry run, to blast away at paper targets. 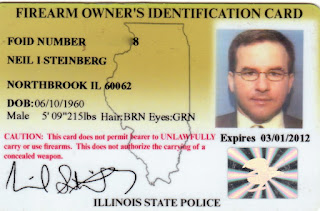 Maxon is at the end of a strip mall dominated by a bus firm. Inside, a small square shop, smelling of machine oil. Lots of guns, obviously, pistols in glass cases and rifles in racks along the walls. The trio of clerks seemed occupied, so I busied myself examining the cases. I was struck by the size of the guns -- enormous weapons, .46-caliber revolvers about two feet long. You'd have to be a giant to handle the things comfortably.
Eventually a clerk glanced in my direction and I explained that I wanted to rent a gun and use the range. You could hear soft, percussive pops coming through the wall.
He said that they require rental gun shooters to be accompanied by another person. I said I saw that on the Web site—"we ask that you shoot with someone when you rent"—but the gentle wording made me hope it was more of a request than a rule, and perhaps I could get around it.
No, he said, you can't.
He seemed to lose interest in the conversation at that point, but now I was curious, and pressed: Why was another person necessary?
"We've had people kill themselves," he said.
Oh, I said, and browsed around some more, mulling my next step. I examined a bottle opener crafted from a .50-caliber bullet. So they're not just for taking down airplanes.
Normally I'd rush to apply the universal solvent of being a columnist at the Chicago Sun-Times, which tends to dissolve this kind of difficulty. But the media—which sometimes suggest that guns be regulated by law, and other heresies—are not exactly the darlings of the gun world. Perhaps it was my own discomfort, being in this unfamiliar, cramped armory, but the gun store employees radiated a certain frostiness, the and-who-sent-you low-grade hostility found in certain bars around Sox Park. Waving the newspaper might get me, not special dispensation, but rather the bum's rush.
Yet I was there, in the wilds of Des Plaines. A shame to leave without shooting. I found myself standing in front of another clerk.
"Couldn't I pay one of you guys to be my second?" I asked, sounding like a character out of a Russian novel.
"We're busy," he snapped, flipping through a catalog. Looking ahead, I asked if a child would count as a second person, for rental purposes.
"How old?"
"Eleven."
He said 11 would be fine, and I hurried out of there, uncertain if I could muster the fortitude to return, never mind with boys in tow.
Driving home, something occurred to me. Faced with the risk of tragedy, the gun store had no problem imposing a rule—a gun control, if you like—constricting their customer's God-given, Second Amendment right to bear arms. A rule designed to prevent people from shooting themselves, or at least to prevent them from shooting themselves with a rented gun at Maxon.
But if the government tried to do the same thing—some sort of policy where mentally ill people are constrained from arming themselves—well, that's the jackboot repression of a police state.
Not that I'm advocating such a measure. The rights of citizens were too hard-earned to let the mental health profession decide who gets to exercise them. And yet. . . . The store had a problem — suicides renting guns instead of buying them, and killing themselves messily here rather than going somewhere else to do it. And they address the problem with a rule. Not a very good rule, mind you — it seems it would, if anything, encourage murder-suicides. Yet a rule nevertheless.
We have a Virginia Tech worth of gun deaths every morning in this country, on average, and then again every afternoon. I don't think it makes one a tyrant to wonder if perhaps there isn't something that can be done about that. Maxon might be onto something with their idea of using certain restrictive rules in an attempt, even a vain one, to prevent these tragedies. It's worth a shot.