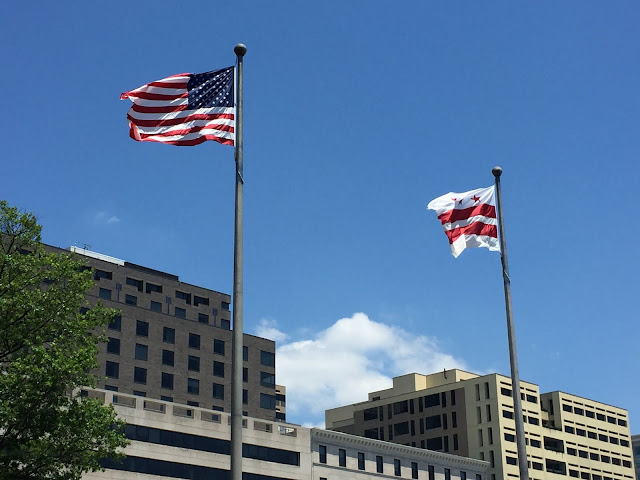 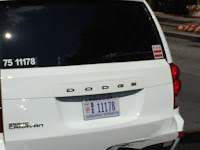 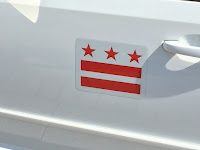 What's going on here? My first thought—my very first, immediate thought—was this was obviously the shadow government that nobody knew about, yet had a kind of sovereignty and its own flag (which shows you the idiocy of such theories: like the shadow government that nobody knows about is going to announce itself with a big honking flag).  The United Corporate Overlords of America, maybe.
No idea where that came from. Too many James Bond movies maybe. I somehow kept my fears of the Big Strange United States Agency That Runs Everything in Secret Yet Has Its Own Flag (these conspiracy theories just naturally get more and more wild) subdued while I toured the Smithsonian, saw the Star Spangled Banner (at least that hadn't been replaced by some strange banner acknowledging our subjugation to the International Monetary Fund). We met my son outside the museum—he couldn't be expected to be anywhere before noon on the weekends. As we walked back north, heading toward sushi burritos for lunch (much better than they sound) we passed the flags again. I pointed the flags out and wondered what they could possibly be.
"I don't know," he shrugged. "The Washington D.C. flag, I guess."
Which of course it is. We were passing the District of Columbia's government building. The flag, I discovered, is based on George Washington's coat of arms, adopted only in 1938. I'm not alone in admiring its sophisticated look: in 2004 it was voted the best designed city flag in the United States.
Like somebody turning a reflection on their glasses into an alien mothership, I instinctively thought up a wild, complicated, wrong solution before considering the simple correct one, creating a shadow government in my head before I thought of the unique little district we were traipsing through. The typical crazy fiction rushing in to fill a vacuum of fact. But that's people for you, and I'm people. Let it never be said that, despite aspirations otherwise, I can be as dense as the next guy, if not more so. So a little embarrassing, yes. But not too embarrassing that I can't tell you about it.
Posted by Neil Steinberg at 12:00 AM