When in doubt, dig out the Whitman 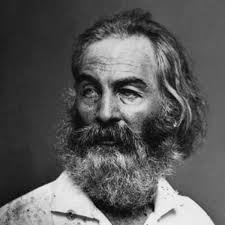 There's a lot of crazy in the world, and from time to time, the on-line world funnels a few quarts of it in your direction. Imagine every junior high school bully who ever lived, packed into one scrabbling sulfurous snake pit in hell, all snarling with one voice.
The experience was a little ... dispiriting. That's the word.  Not just to see hundreds of trolls prancing about, waving my old dirty laundry over their heads, convinced their worldview is proven, which would be the outcome no matter what I wrote.
But to think about what they represent. Something deeply sad about America, about its current moment of paranoia, fear and self-hatred. Shake it off. We should never be sad about America, what Abraham Lincoln called "the last, best hope of earth."

So I turn to the nation's supreme poet, Walt Whitman, as a boost. Uncle Walt never disappoints. I pulled down "Leaves of Grass" and was immediately rewarded: "We are not merely a nation, but a nation of nations." He knew that in 1855. The Republicans still haven't figured that out, to their sorrow. Looking to share something more substantial, I poked around Nexis and found this old column, ironically prompted a decade ago by a different terrorist.  It was from when the column was run as a series of small items. I can't remember who the pal was in the second bit.

"IN ALL PEOPLE I SEE MYSELF"

"I want to kill Americans," said Zacarias Moussaoui, "I believe every American wants to kill me."
"I loaf and invite my soul," wrote Walt Whitman, "I lean and loaf at my ease observing a spear of summer grass."
It would never occur to me to juxtapose the would-be Muslim terrorist and the 19th century American poet, except they share one unexpected common aspect: Moussaoui is identified in press reports as "the 37-year-old al-Qaida conspirator." And Whitman refers to himself, in "Song of Myself," as "thirty-seven years old in perfect health begin/Hoping to cease not til death."
So two men, both 37, separated by a century and a half of time and an enormity of culture. One an American, drunk on life, wandering the docks and alleys, his heart athrob with goodwill and not a little lust for his fellow man, savoring the sweat of work, the warmth of the sun.
"Clear and sweet is my soul," he writes. "And clear and sweet is all that is not my soul."
The other -- and let's all say this together out loud, shall we? -- is a native FRENCHMAN, born in FRANCE, of Moroccan parents. Twisted into a knot of hate, contemptuous of this great nation and its people, facing a quick death strapped to a gurney, or a slow death in a tiny metal room.
"We want to inflict pain on your country," said Moussaoui.
I hope you read Moussaoui's comments carefully, as I did. Because to see the lunatic hatred of Moussaoui and to compare it to the expansive humanity of Whitman, the poet of the American soul, is to be reassured.
Yes, the future is uncertain. There will be dark days -- the armies of Moussaouis still out there will see to that.
But the spirit of freedom that was rattling around Walt Whitman's head in 1855 has spread across the globe, toppling dictatorships, striking fear in the hearts of repressive parodies of faith.
We are winning -- in fact, have already won. That's why they hate us so much, though the hate -- as hate inevitably does -- only pulls them down faster.

Did the word "juxtapose" in the above upset you? Did it cause you to turn the page (it did? But you're still here!) Did you know the meaning? Or take a guess? Did you look it up in a dictionary?
It's a good word -- it means "to place close together for contrasting effect." I didn't use it to show off, but because it seemed the right word. Nexis says it was used 114 times by U.S. newspapers in the past month. So I'm not alone.
I say this because you can't imagine the crap I get for using big words ("crap" -- now there's a good short Middle English word for you).
The common wisdom is that this is a newspaper, where the average reading level is about 12 years old, and thus nothing complex or difficult should be offered. Put the slop where the pigs can get at it.
I reject that. I think you're smarter than that. I've been fighting this battle for years. I still remember our beloved, regal city editor, Dick Mitchell, rising up from his desk, pointing at me across the newsroom, and shouting, "Polygonic? Polygonic Steinberg!?!" Then a shivering shake of the head and shoulders, as if disgusted to his core. "Nooooooo!"
Just today, I was walking with an old pal.
"I've stopped reading your column," he announced.
"Why?"
"Because you used 'soliloquy' yesterday. Who are you writing for, ancient Greeks?"
"It was clear in context,'' I stammered, defensively. "Hamlet's soliloquy."
"Doesn't matter," he said. "Nobody knows what it means."
"Let's find out," I said, desperate, marching us into a shop and approaching a man in a blue work shirt with his name embroidered over the pocket.
"Excuse me, we're from the Sun-Times," I said, "and we were wondering, if I referred to 'Hamlet's soliloquy,' would you know what I'm talking about?"
"Sorry, no" he said, grinning uncomfortably and edging away from me.
"See?" my pal said. "But is that going to influence you? No way. You're going to cling to your 'soliloquy' " -- you can't imagine the sarcasm and contempt in his voice -- "and your 'ubiquitous' and your 'anachronism' until you don't have any readers left at all!"
I like to think of myself -- whoops, two syllables, too long -- I like to think of Neil as a guy who can change. So I want to know: is my friend right? Do you find big words bad? Or is the occasional— whoops, four syllables—or is the rare hard word good?
—Originally published in the Sun-Times, April 16, 2006.
Posted by Neil Steinberg at 12:00 AM