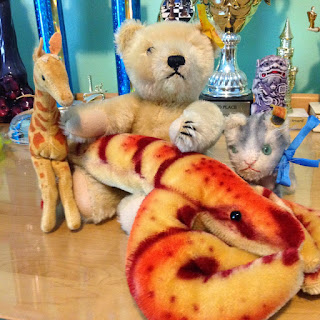 The American International Toy Fair winds up in New York City today, reminding me that in the go-go '90s I actually convinced my bosses to send me there to report on the action. How, I can't imagine—probably offering to stay on a friend's couch to cut expenses.
I remember the fair so clearly. Particularly entering into the Marx Toys area, which made a Ft. Apache cowboys and Indians set that had been the coveted joy of my 7th birthday. They had one set up, exactly at it was on that sun-drenched June day.
"It's the SAME!" I marveled.
"We use the same molds," the president of Marx told me.
But here's the odd part. When I went back to look at the column I wrote from my expensive trip to New York, it's not worth re-reading, Dry, ordinary and not-up-to-standards. Maybe the travel had thrown me, or I was off my feed.
So I found this toy-related column from 2004, which I'm running in honor of the Toy Fair—and, to be honest, since I'm coming off the novo-virus, and can't imagine writing anything.  If the story about the bear sounds familiar, it's because I told it in this September 2014 post about old stuff I love.
Though look at that first sentence, with its awkward exclamation mark, maybe the subject to toys sparks such enthusiasm that it overcomes my professional discernment.
Can't let that be true. I'll have to ask my boss to send me next year, to see if I can't write something worthwhile about toys.

Chicago is losing her toy stores! I keep waiting for the story to break out of the business section ghetto and be seized by television and the chattering classes, but it never does. So I'll have to put my shoulder to the stone and roll. First that enormous Toys R Us flagship on State Street shut down, then FAO Schwarz on Michigan went bye-bye, and now Zany Brainy and Noodle Kidoodle -- toy stores, though they tried to present themselves as some kind of High-Toned Science and Learning Centers -- all have gone belly up. What's going on here?
First, a sop to the few that remain, so they don't send out pained hoots of existence. Yes, there's Galt Toys at 900 N. Michigan and a few KB Toys and others I'm not thinking about.
But downtown is becoming slim pickings. The loss of FAO, Toys R Us and the others should not occur without somebody, if not mourning, at least pontificating.
Not that I'll particularly miss FAO Schwarz. First, they constantly blared that dreadful parody of Disney's dirge "It's a Small World" at anybody who walked in the door. If you haven't heard the song ("It's a world ...") then count yourself blessed ("... of ...") because it carves itself into your mind and haunts you to the grave ("...toys!").

GI Joe doesn't count as a soldier
Second, I once asked a clerk for lead soldiers. I had bought some for the boys at Hamleys, the immense toy store in London. It seemed more a gift for myself than for them, but they surprised me by liking them. I thought -- silly me -- FAO might sell them.
"Oh no," a clerk fretted, fluttering his hands. "We wouldn't carry those." War toys! You'd think I'd asked for napalm. As if the world will become a more violent place if my boys get a few more troops of the Royal Welsh Fusiliers.
Third: I had purchased a Steiff teddy bear from FAO for my younger son's birthday. Steiff makes these gorgeous, durable and hugely expensive mohair toys. I had some as a kid, and so underwriting their vast cost for my own boys struck me as a stab at tradition. I remember what I paid for the teddy bear -- $160 -- due to my wife's shocked, rage-suppressing "why-do-you-always-do-this-to-me?" reaction, and the way I, with rare matador smoothness, deflected her ire into sentimental tears with one apt sentence.
"When you see the bear in your grandchild's crib," I said, "it'll seem like a bargain."
My older son surprised me by saying he wanted a teddy bear like his little brother's. Sensing trouble, I asked him if he meant a bear similar to his little brother's -- a Steiff bear, perhaps looking a little different, since they make about a hundred styles. No, he said, with the certainty of youth, he wanted That Exact Same Bear.
Filled with hope, I ran to FAO Schwarz. They were cleaned out, and a clerk gave the not-my-table shrug that passed for service.
With time dwindling, I had a desperation-stoked flash of brilliance. I plugged into Google "Steiff teddy bear" and the serial number off the button in the bear's ear (Steiff toys have a little brass button in their ears; don't ask, it's another tradition), and up popped a toy store in -- I kid you not -- Coon Rapids, Minn. Selling the exact bear I wanted, for $30 less than I had paid for my FAO bear a year earlier. Two days later, it arrived in the mail.
That's why toy stores are dying. Why buy a $200 Xbox (if that's what they cost; I've struggled to keep my boys away from it with the same fervor that parents of teens use to keep them off drugs) when, with a little planning, you can skip the trip, skip the store, save money and have the toy in hand a few days later?
Not to be simplistic. They have the Internet in London, too, and Hamleys is still there. I'm sure our addiction to soup-to-nuts emporiums such as Target is part of it.
And the aforementioned Xbox has to be a factor. It's the last toy you ever have to buy. My impression is that once a kid has one of those, they take it into a room, close the door, and don't come out until puberty hits.

Plug in the kids and forget 'em
That can be a good thing; parents can talk, read, fly to Paris while the kids remain mesmerized. Still, my wife and I have been resisting. Once, when the foyer was a clutter of shattered block castles and scattered lead soldiers (sure, I let the boys play with them, and sure, the occasional arm gets twisted off. But how many kids in the world are doing that? I take a certain anachronistic pride).
We looked over the mess, and she said, "Once they get an Xbox, they won't play with toy soldiers."
Ouch. "Never," I vowed. Let every other kid go on Ritalin and Xboxes. I managed to straight-arm the every-kid-in-school-has-one argument, and deflected the unvarnished, constant begging.
But one night last week, I discovered the boys on their knees carefully arranging piles of change and crumpled dollars — literally counting their pennies, pooling their resources to attain their beloved computer game god.
Even stone hearts break. "They'll be freaks enough just based on parentage," I told my wife. "Let them have their Xbox. I spent years playing Risk -- that wasn't exactly learning French, was it?" And anything that gets two brothers, 6 and 8, to cooperate with each other can't be all bad.
—Originally published in the Sun-Times Jan. 9, 2004
Posted by Neil Steinberg at 12:00 AM