Flashback, 2005: On the frontiers of science. 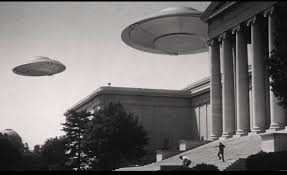 While the boogeyman media that exists in the mind of our president and his supporters is slammed for its supposed lies—a "lie" being any truth that Donald Trump doesn't want to hear—the actual media that I know is not only obsessed with accuracy, but, unlike our president, has concern for both the readers and the people being written about, on a human level.

When I was on the night desk, I would take phone calls, and I took one from a man who said he had invented a flying saucer engine. He left his phone number, and I kept it, and would call him every few months, to check on his progress. I was curious, which is the heart of journalism. I encouraged him to bring his invention into the paper. Eventually, he agreed, which was surprising, almost a little scary. I remember laying this out in front of the photo editor. This guy who believes he has invented a flying saucer motor is coming in for a portrait, posing with his invention. He's in earnest, and we have to treat him with respect.
Below is the story that resulted. I was proud of how I communicated the situation before me in a way that handled the inventor gently yet was clear to everyone else. It came to mind last week because I was approached by a Chicago composer whose music is used to score low-budget horror films. We went back and forth on email. I asked him a few polite questions, and viewed a few trailers of the films he is involved in—Cannibal Santa can represent them all.  While I felt I could have written something, what kept me from doing so is this: he was proud of them. I kept thinking of Royko's line about not taking a bazooka to a flea. This was his dream—a lot of people's dreams, actually.  I had to let it go, telling him a version of the story below, in abbreviated form, as explanation. To my relief he replied, "You have me cracking up laughing! Ha ha. Yes, I get it."
This piece is brief because it's from a time when my column was a number of items on a full page. It ran under the headline, "On the frontiers of science." Roger later called to thank me for sharing his story. I was genuinely happy about that.

Chicago is home to big inventions. The first nuclear reactor, as many know, was built on a University of Chicago squash court. Less known is Elisha Gray, the Highland Park electrical whiz who invented the telephone, only to have it swiped by Alexander Graham Bell.
In that light, I welcomed Roger Rhenium to the office. Mr. Rhenium is building a flying saucer engine in his North Side basement. He's kept me informed of his progress over the years, but I never dared hope to actually meet him, never mind hold his Rhenium Reactor in my hands.
The device involves a pair of D-shaped tubes through which ball bearings flow. Turning the tubes as the balls race through them builds up torque — I'm not able to explain exactly how, but Mr. Rhenium assures me it could be not only used to power flying saucers, but also cars and boats.
Mr. Rhenium, 59, is a professional house painter and amateur scientist. He has been working on his reactor, sporadically, for 40 years. He has also said he created "a very important energy device," too revolutionary to reveal to the media at this time.
Skeptic that I am, I wondered if he was not concerned that something so simple and mechanical — stainless steel balls in a tube — would have been thought of by somebody already, had it worked.
"It is simple. Extremely simple," he said, in his soft-spoken manner. "But I'm quite confident no one's thought of it yet."
Like me, the U.S. Patent Office failed to grasp the exact way the reactor will function, based on Mr. Rhenium's application drawings. They have asked for a working model. Mr. Rhenium seemed slightly taken aback — he feels his drawings are clear — but he has contacted a model builder in Wheeling, and they are proceeding.
Everybody needs a dream — I myself cling stubbornly to the notion of someday being thin, successful and surrounded by friends, a goal that lately seems more fantastic than Mr. Rhenium's. I admire his calm certainty. When I asked if he was offended that the Patent Office sent him a list of Newton's laws of motion, he said he didn't mind, and brushed aside the implication that these laws might even prevent his Rhenium Reactor from ever working.
"It will work," he said. "I promise you that. I've got complete confidence in it."
—Originally published Feb. 11, 2005
Posted by Neil Steinberg at 12:00 AM