From Katrina emerged a hero 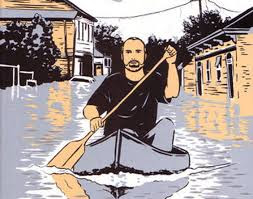 I'm afraid to even whisper this. But here goes: do you think the American public was, oh I don't know, let down by Hurricane Irma? Felt, in its secret heart, that they were promised this epic storm, this unparalleled disaster, and the severe weather that gripped Florida, damaging though it was, fell far short? As if the whole thing were an entertainment, a show, an extravaganza, that never quite pulled together.
Not the people living it, of course. They were relieved, somewhat, although the power outages and flooding and such were no doubt trial enough for them.

No one would admit saying this—I'm certainly not. Saying it, I mean. But my gut tells me the feeling is there, just below the surface.

Without the promised once-in-a-millennia storm, cable news had to time-fill and tap-dance, sharing what tales it could find, spinning each person being evacuated from their home as a moment of high drama and heroism.
We will, perhaps, eventually learn of true tales of heroism, though they will be hard pressed to top "Zeitoun," the excellent book that Dave Eggers wrote after Hurricane Katrina.
I wrote this when the book came out, but before the Zeitouns divorced, after the hero was shown to be not so heroic after all.  It detracted from the story, quite a bit, an unhappy ending to an inspiring saga. I don't think it undermines the book, however. Every tale has to end somewhere, and Eggers could not predict the future.

Out of the fetid floodwaters of Hurricane Katrina, where most public figures associated with the 2005 disaster drowned in their own incompetence and failure—a negligent president, an overwhelmed FEMA director, a bumbling mayor—paddles a true American hero, Abdulrahman Zeitoun.
If "American hero" and "Abdulrahman Zeitoun" do not fit together easily in your mind, then you must read Zeitoun, the new book by Dave Eggers, a Chicago native and University of Illinois graduate. Eggers examines the hurricane that inundated New Orleans four years ago through the eyes of one man and his family. As the storm gathers, we meet Zeitoun, a Syrian-born immigrant who runs a successful remodeling business; his wife, Kathy, a convert to Islam, and their four children.
Given that too many Americans either know nothing about their fellow citizens who follow Islam, or else clutch at crude stereotypes, this book would be fascinating even without Hurricane Katrina, just for the intimate portrait Eggers paints of the family's life, of the frequent unease of being Muslim in post-9/11 America, the challenges of raising kids and running a business.
Zeitoun is a man who fits no cliche. The logo of Zeitoun A. Painting Contractor LLC is a paint roller ending in a rainbow. Zeitoun picked the rainbow because his painters offer many colors. After his signs and stationery are printed, however, he learns a rainbow also has another meaning. Some customers turn Zeitoun's vans away, assuming it is some kind of gay painting company. New workers see the vans and quit, afraid people will make assumptions about them. After some soul-searching, Zeitoun decides to keep the rainbow, realizing that those who reject one minority tend to reject them all: "Anyone who had trouble with rainbows," he says, "would surely have trouble with Islam."
Kathy Zeitoun is an equally strong figure, deflecting the constant muttered tweaks of her family. If you've ever wondered why a Christian woman would abandon her faith, adopt Islam and wear a headscarf, after reading about the process that led to her conversion, you'll wonder that more don't.
As the hurricane looms, Kathy and her children flee the city, to her family in Baton Rouge who can barely tolerate their presence. ("Take that thing off your head," her mother is still telling her, 15 years after she converted.)
Zeitoun stays in New Orleans, to look after his house, to help, and because he is curious. Katrina hits, but the damage is not bad. Then the levees break, the city floods.
Zeitoun has a used canoe, bought on a whim, and he takes to gliding through the abandoned, almost serene streets, the antennae from submerged cars scraping his canoe. He evacuates trapped senior citizens and feeds hungry dogs left by their fleeing masters, occasionally attempting to enlist the help of the growing military presence.
Eggers' writing is pitch perfect, without flourish or excess.
"He paddled up Claiborne, the wind and rain fighting him, to the Memorial Medical Center, where he knew there were police and National Guard soldiers stationed. As he approached, he saw soldiers in the alleyway, on the roof, on the ramps and balconies. It looked like a heavily fortified military base. When he got close enough to see the faces of the soldiers, two of them raised their guns."
The official relief efforts are an invading force, blasting around in their helicopters and fan boats, too loud to hear the soft cries that send Zeitoun on another mission of mercy. They remain in the background until—not to give away the plot, which snaps forward like a novel—they suddenly aren't in the background anymore, and Zeitoun is sucked into a nightmare of George Bush's vision of an American security state.
How he responds, the sustaining power of his faith, how his wife and his extended family around the world react, make Zeitoun required reading, a truly significant book, a guidepost to what America has gone through and where it might yet return unless we hold fast to the principles we claim to revere.
Zeitoun idolizes his older brother, Mohammed, a famous champion long-distance swimmer in Syria who died in a traffic accident at 24. But judging by the effect that Abdulrahman Zeitoun could have on the world, if this book gets the audience it deserves—it is already a best-seller—his solitary heroism will prove vastly more important. As pious as a Pilgrim father, paddling his canoe with the silent watchfulness of a Cherokee chief, Zeitoun fills an inexcusable void in our culture—the Islamic-American hero: strong, resourceful, loving, patriotic, a man who puts himself in a difficult situation by deciding to stay and face indifferent nature, only to be plunged into a far worse ordeal by the government, as represented by a gang of equally indifferent official goons, stupid with authority, many of whom could have been saved from becoming police state cogs had they the benefit of having read this book.
Zeitoun offers a transformative experience to anyone open to it, for the simple reasons that it is not heavy-handed propaganda, not eat-your-peas social analysis, but an adventure story, a tale of suffering and redemption, almost biblical in its simplicity, the trials of a good man who believes in God and happens to have a canoe. Anyone who cares about America, where it is going and where it almost went, before it caught itself, will want to read this thrilling, heartbreaking, wonderful book.
—Originally published in the Sun-Times, Sept. 2, 2009
Posted by Neil Steinberg at 12:00 AM