What do Ohio and Belize have in common? 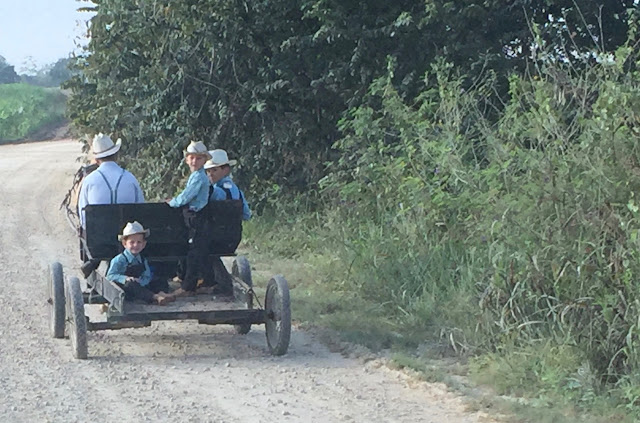 Knowledge imparted second-hand—through books, say, or photographs displayed in airports—is inferior to knowledge that is imparted directly, through experience in the living world.
I encountered a noteworthy example of this during my visit to Central America last week.
One of the first things I saw in Philip S. W. Goldson International Airport in Belize City, steps away from the tarmac, lining up to go through security, was a large photograph, suspended from the ceiling, of what looked like Amish children.
Being as instinctively arrogant as any American, I automatically assumed it was some kind of general photo of a scenic local, a banner from Pennsylvania perhaps, somehow scavenged, mis-directed here, and repurposed to decorate this very Third World airport.
But I passed under it, a caption said something about Mennonites in Belize.

I thought no more about it until a few days later, driving out to the Mayan ruins at Lamanai.
Suddenly the road was busy with horse drawn carts. On either side, fields being tended by men in beards and suspenders, by women in long, homespun dresses and bonnets.
And I thought, with genuine surprise: "Oh, there are Mennonites in Belize."
You'd think that the big honking photo at the airport would have been a subtle tip-off.
But wasn't.
The obvious first question is: how did they get there.
The short answer: circuitously.
What started as an offshoot of the Anabaptists in Europe in the 16th century found their way to Russia, then Canada and the United States which, in the 1950s, tried to get the Amish, et al, to enroll in their Social Security program.
Which inspired communities of Mennonites to emigrate to Belize in 1958, where they farm and raise animals, as well as build vessels. There are some 12,000 living in Belize now, and I saw quite a bit of them, even at resorts, family groups hanging together, the father with his inevitable beard and suspenders, mom in her handmade dress and bonnet, and a few boys with big straw hats, staring in unashamed, slack-jawed curiosity, almost wonder, at us, as if they had never seen outsiders before.
Leading to a second question that had never crossed my mind before. I knew of Amish from travel in Ohio and Pennsylvania. And I had heard of Mennonites. They obviously shared social traits—in dress, in speech. Both speak Pennsylvania Dutch or Low German. But what is the connection between the two? Are they rivals, like Shi'ites and Sunni? My uninformed guess was that "Amish" was the larger, general term, and Mennonites were a subset of that, the way that Hassids are part of general Jewry.
The truth, as usual, is complicated.
There are dozens of sects of "Plan People" who avoid the modern world and embrace less complicated lifestyles. The Amish—followers of Jacob Amman, who felt that non-believers should be shunned—split with the Mennonites, who didn't, in 1693, and thus the Mennonites are more receptive toward modern conveniences such as telephones and electricity, and also have an evangelical aspect that tends to send them further afield.
I always thought that the Amish/Mennonite model is one that fundamental Islam might want to consider as it continues butting up against the West. Rather than trying to undermine what they consider a hopelessly sinful society, it might work better if they just formed their own enclaves, where they'd be free, more or less, to seek a life they consider ideal.