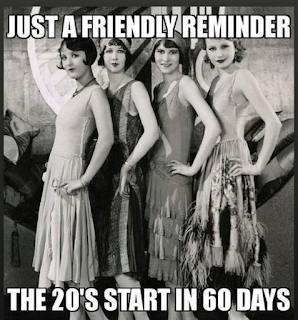 My rule of thumb at the paper, when asked to do something, is to always say Yes, unless I can't do it. Then I decline. Because I like to be useful, and have learned that the topics I'm drawn into are typically subjects I might not otherwise tackle. So periodically I've been working on our new, very successful special magazines and wrappers, happily writing about subjects from driving exotic cars to Illinois manufacturing.

In Sunday's section wrapping the front page, I was asked to parse the decade that has just gone by, with emphasis on the Obama/Trump dichotomy. That I did, more in sorrow than in anger.

It says something about both the dominance of social media and the fading iconography of eras that I didn’t realize a new decade is upon us until I saw a meme on Facebook at Halloween.
“Just a friendly reminder,” it announced, above four slim women in flapper dresses, “The ’20s start in 60 days.”
Right. They do, don’t they? Those 60 days have dwindled to a handful. Then it’ll be the ’20s, again. Will they roar? The last ’20s sure did, a growl of prosperity and sexual liberation and music so loud that we still remember it all a century later. Followed by the grim ’30s. The wartime ’40s ...
In the 21st century, that pattern broke. What do we even call the decade years that just expired? “The Teens?” I never did, and I lived through every minute, so far. MSNBC is going with “Decade of Disruption,” which might be true — Amazon and China both muscling aside old powerhouses, America and Britain stumbling badly — but that won’t be flying off anybody’s lips.
And the 10 years before that? “The Aughts?” Even worse. And what was the flavor of the ’00s? The Post-9/11 Decade? Maybe. But even then, nowhere near the instant emotional impact of “The ’50s” or, the ultimate, “The ’60s.”
Then again, the period between 2010 and 2019 was particularly schizophrenic, given that about halfway through it Barack Obama, a most careful, reserved and thoughtful president, did his mic drop and ambled out of public life, exiting stage left. Immediately replaced by Donald Trump and his parade of clown cars, tripping over themselves and into power from stage right, calliope at full wheeze, ushering in what can only be described as perpetual pandemonium.
What will history call that decade? “The Troublesome Teens?” America is sorta old for a stormy adolescence at this point. “The Trump Triumph?” Could be. “The Pre-War Years?” Let’s hope not.