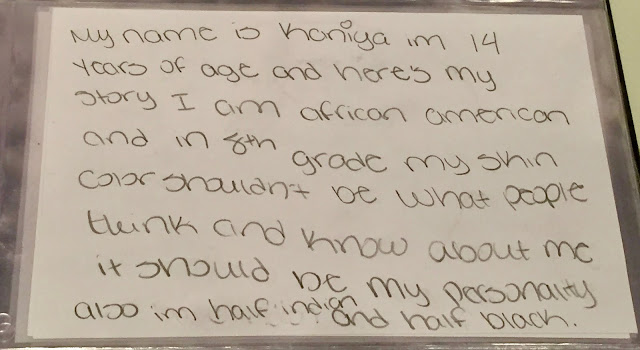 A reader remembered a column I had written on reparations in 2002, and I posted it Tuesday. It makes sense to then share some of the reader reaction I got to it. Reading this nearly two decades later, I'm struck by how much more crazed we've become, as country.

My column last week on the issue of reparations for slavery seems to have touched a nerve with a lot of people, white and black. Most gratifying of the many responses I got, and thought were worth sharing, were letters and e-mails from African Americans who were astounded to find a white person expressing an opinion that made sense to them. Like this one from Kathy B. Hayes of Chicago:


"This is a 'thank you' for being bold enough to share your thoughts with the public on this very sensitive matter. I, being African American, was beginning to feel that this was something that 'White America' would never fully understand. Though it just seems to be so clear cut, most people I've discussed the matter with say, 'I didn't do it . . . [African Americans] should be grateful they've come so far.' Many won't accept the fact that America was built on the backs of my ancestors! The issue is deep, and many African Americans are suffering from generational curses, but many seem unable to break the curse. As you seem to be aware, there are people today who have been unable to recover from the days of slavery up to the '60s, when the hatred toward African Americans was as deep as in the days of raw slavery.

"The first step is to resolve this issue. What better way than monetary reparations in some form or another? The Bible tells us that money serves ALL purposes (Ecclesiastes 10:19),whether in the form of low-rate mortgages, college tuition, etc. Time has not healed the marks from all that's transpired right here on American soil. America must remember the Bible also tells us that whatsoever a man sows, that will he also reap.     "Now is the perfect opportunity to show some compassion for the crimes that took place."


White readers, on the other hand, tended to take what I call the "that's not my table" approach. Their relatives were in Ireland, or Sicily, or somewhere else, and the whole thing is not their problem. Ron Moran wrote:

The problem with this approach is that it isn't extended toward other aspects of American life. Nobody says, "Gee, I'd like to be protected by the Bill of Rights, but my relatives were in Prague when it was ratified." You come to this country, you become an American, you inherit the country's burdens along with its joys.
James Reyes argues that reparations could galvanize black youth to new achievement:


"The big lie about reparations is that white people would be negatively affected. This is the real reason why there is a great reluctance to even discuss the issue . . .     "If free college tuition is offered to descendants of slaves, or even all African-Americans, they better be ready to take advantage . . . . The disillusioned, bored, directionless young people of this country would be the new heroes of the civil rights movement."

Many who wrote in opposition of reparations had an amusing tendency to unconsciously illustrate the pervasive racism that blacks are still up against. Perhaps sensing the loathsomeness of their opinions, they tended to write anonymously. Here is "Frank L." explaining his viewpoint:


"What created slums, and why are they still there? Blacks did it all by themselves, and it's not gonna get any better because they don't care. I lived in those neighborhoods, and where the white people moved out, they were beautiful and well-kept. If you build new, they will wreck that in no time. Take a look at all those buildings on the South, West and North sides that have to be torn down. Who wrecked them? Common sense will tell you that's where all the gangbangers come form. Reparations? Hell no."

I can't end on that note. Let's return to planet Earth with Phoebe Novak, of Chicago:


"Yes, history is what has brought us here today, as each generation builds on the previous one. When previous generations of one group were held in slavery, we cannot say that we all have run this race from the same starting line. When the gun went off at the starting line, [they] were chained at the starting blocks. Well, eventually the race officials (no pun intended) released those people, and they started running, trying to catch up to all the others . . . . They would have to be superhuman to catch up at that point. Fair race? No, a false start, but the race was not rerun.     "Your column put this issue in very clear words. The United States should set this matter right. Maybe scholarships are one way to begin. I don't have the answers, but we should at least start."