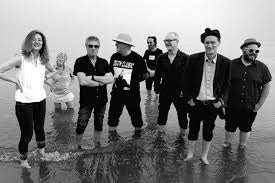 I see The Mekons have a new album coming out, Exquisite. I'm not a fan of the English band—Rolling Stone describes them as "cowpunk," a heretofore unimagined (at least by me) blend of punk and country, which is just wrong).  I had lunch with them once, strangely enough, quite by accident. We were both invited to New Trier High School's literary festival, and it gave me the perfect excuse to follow up on a previous column, asking readers to send in suggestions of new love songs, something I wrote as my silent protest to Bob Greene suggesting that no new love songs of any value were written after his emotional life peaked and died in 1964.

I'll never forget how the phone call inviting me to New Trier went.

People do not change as they grow older—I firmly believe that. They do not change, they only become more so, distilling, bubbling down to their essences, whether lumps of sweetness or thimbles of bile.
Similarly, as the election day nears, the ceaseless clamor of issues and accusations, spin and counter spin, charges and counter-charges, reaches a crescendo, an elemental roar.
John McCain compresses his party's hopes into the form of Joe the Plumber, a Regular Guy Everyman who represents the fearful white middle class. While Barack Obama tries to put his arms around a country where almost half—maybe more, maybe less, we'll soon see— are wriggling to escape his embrace.
As the day approaches, the cacophony becomes so loud it falls silent. Perhaps all the noise has deafened us. I don't know about you, but I can hardly hear it anymore.

'Push your finger and make a sound...'

Synchronicity happens—related events occurring together that have no apparent link. Not an hour after I finished Sunday's column about whether there were any great love songs written in the past decade, I found myself at New Trier High School, unexpectedly having lunch with Chicago songwriter Steve Dawson, plus Jon Langford and Sally Timms—part of the British punk band The Mekons—all of us there to talk to the kiddies about writing.
Sensing an opportunity, I posed my question, first to Dawson.
"There's a wave of acoustic love songs, more romantic songs than there have been in years," he said. "There's a whole wave of heart-on-your-sleeve songs."
Such as?
He mentioned "Falling Slowly," a song that was in the Irish film "Once" and won the Academy Award last year
"I think that's a beautiful song," he said, and I agreed, then went to seek out The Mekons.
"I think the Handsome family has some good, realistic love songs, serious love songs," said Langford, conferring with Timms. "The Magnetic Fields have written loads of great love songs."
"Realistic" is one way to describe the Handsome Family. "Grim" might be more accurate: "You kept falling down and rolling on the ground/ like a drunken little bird flapping its broken wings . . ." This duo makes Tom Waits seem like The Archies.
The Magnetic Fields are more my taste. The group, fronted by Stephen Merritt, even put out a boxed set called "69 Love Songs," which, to my surprise, actually has 69 tracks, paying homage to a wide range of musical styles, from Billie Holiday to Irving Berlin ("I'm so in love with you girl, it's like I'm on the moon; I can hardly breathe and I feel lighter.")
I spent a sunny Sunday morning drinking Cafe du Monde coffee and listening to the suggestions that readers sent in and, boy, what a great way to make a living.
The first reader-submitted song came Saturday morning from Terry Gavlin, of Brookfield, who sent an MP3 of "My Doorbell" by The White Stripes, a bouncy tune I listened to—golly—at least six times, just because of how Jack White's muted trumpet of a voice tumbles over the phrase "I've been thinkin' about . . ."
Heather Swanson suggested "I'm Yours" by Jason Mraz, a joyfully post-coital, reggae-syncopated song. Roy Gilbert said his teenage daughter likes "Hey There Delilah" by the Plain White Ts ("cute and well-written," he said, accurately). Fred Ungaretta mentioned Coldplay's "Green Eyes" (A good song that begins, "Honey, you are a rock, upon which I stand. . .") He was one of several readers who plumped for Coldplay (a former student of mine just gave me a CD by Coldplay—an aptly named group: cold music, like ice floes sloshing on a frozen sea that seeps into your veins and, surprisingly, warms).
All weekend I found myself quizzing everybody I met under 30 as to their idea of a great love song.
"'Blue,' by Joni Mitchell," answered my 24-year-old niece—young people are already up-to-date, so they can take pride in antique tastes.
"No," I said, "something recent."
"Ben Harper—'Walk Away,' " she said, before whipping out her cell phone and playing a hip-hop song, "The Lite" by Common.
"I think this is a love song," she said, listening carefully. "Oh yeah, this is totally a love song."
But is it great? We can't be sure, not yet anyway, a truth that becomes clear when we remember that the classics, from jazz to Sinatra, from Elvis to rap, were ignored or loathed by the majority when they first arrived.
"As a guy who is definitely old enough to be your father, when I first heard the Beatles I too thought, 'This is music?' " writes Allan Klein. "And then I started to listen very carefully and lo and behold, realized that their writing was truly wonderful, specifically, 'Yesterday.' "
Klein recommended Renee Olstead, and I have to admit that, listening to her gin-clear voice slowly peal out George Gershwin's "Someone to Watch Over Me" makes a person doubt the chances of the Magnetic Fields catalogue to withstand the grind of time.
Then again, it doesn't have to. There is no greatest love song, only the love song that means the most to you at the moment, and I if had to pick one from all the songs suggested—thanks everybody; much fun—I'd have to go with Ben Harper's "Walk Away." There's even a bit of Cole Porter wordplay ("You put the happi- in my ness"). It begins with careful acoustic guitar and then, "Oh no, here comes that sun again/That means another day without you, my friend"—how's that for an opening line?—"And it hurts me to look into the mirror at myself/and it hurts even more to have to be with somebody else/And it's so hard to do, and so easy to say, but sometimes, sometimes, you just have to walk away."

There are a lot of good Beatles jokes online, such as this one: