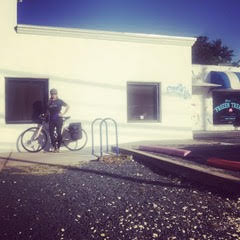 Austin bureau chief Caren Jeskey takes us for a spin through life today.

My pat answer to the bike question was “no, thank you,” but that usually did not suffice. “You can’t ride home from here! Let me take you,” or “it’s too cold/late/rainy.” The well-meaning friend or family member thought they were doing me a favor by offering to drive me home when, in fact, my body and soul wanted nothing more than to get on my bicycle and ride. A cyclist has a sturdy countenance and a hankering for the wind. We can tell you if it’s blowing at 5 or 10 miles per hour, and at 12 or more we know we might be in for a bit of a challenge. This depends on whether it’s a headwind, coming from one side, or mercifully at our backs. We’ll only concede and remove the front tire to gingerly place our babies into the trunk of a car if we are absolutely beat or— as happened once or twice in my drinking days— a friend absolutely insisted.
My love of bikes started early. First came the shiny red tricycle with tassels flowing from the grips. Then came the Big Wheel. I remember the day my mom picked me up from school, a giant wheeled tricycle of sorts rolling around in the folded-down back seat of the station wagon It was a few days before my birthday. She said “don’t look in the back!” so of course I did. I was overjoyed to see it there and counted down the hours to my birthday morning. From that day on I’d ride in endless loops around the house. I was lucky that the living and dining rooms were divided from the kitchen and downstairs bathroom by one long partition wall, making a perfect race track for my little legs. 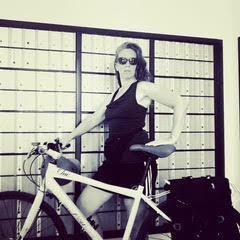 When I got my first real bike, it had training wheels that my dad had firmly affixed for my safety. One day when in the early 70s when I was 5 or 6, my tough Nana— my grandmother’s sister Kate— had enough. She unceremoniously removed the trainers. I got on the bike, and she pushed me away from her to sail or to crash, a cigarette dangling from her lips. I sailed all the way down the whole block of Birchwood Avenue between Albany and Sacramento.
The next bike had a big banana seat and could easily fit a friend or two, or even three; one on the seat with me, one standing on the hubs of the back wheel, and one perched on the handlebars. We learned from an early age that it was necessary to have wheels to get to McDonald’s quickly to assuage the craving for a hot apple pie or vanilla milkshake and fries.
I don’t quite recall what I rode in high school— too distracted by boys, Water Tower Place, and L and subway train excursions.
When I moved to Santa Monica in my early 20s I bought a Diamond Back mountain bike that became my trusty steed for many years. She carried me along the ocean from Santa Monica to Venice Beach and beyond, day in and day out for the year and a half I lived there. When I’d had enough shots of booze at the 2nd Street Bar & Grill where I worked, and smoked enough Mary Jane to last a while, it was time for me to come back home and finish college. 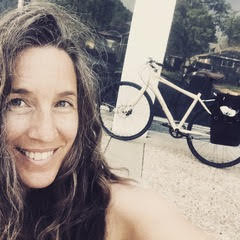 Diamond Back and I moved back and cruised Chicago streets year round; neither snow nor rain nor sleet nor ice could stop us. Her sturdy nubbed wheels kept me safe. Many folks don’t realize how quickly the body warms up when riding. Just keep your face properly covered and wear glasses or goggles, and voila; it’s almost like biking on a 70 degree day. We were living in West Rogers at that time and would cruise down California to Dodge to the Family Focus community center in far North Evanston where I worked at non-profits. At the end of the day we’d bike to various and sundry yoga and meditation schools, or to the green markets full of health food and tinctures that were starting to burgeon in Evanston and the near north side. We might grab a bagel at the shop on Ridge that sold the yummiest “bagel bites” I’d ever had, before they got shut down for selling LSD (or at least that’s what legend holds).
Poor DB finally got stolen, due to my negligence. I’d been living in Hyde Park and going to graduate school when I had a short stint in a co-op of activists who gave me a room to rent. I left her there and a so-called friend “borrowed” her. Allegedly he had her locked up in front of a Kinko’s on 57th Street where she was stolen. I didn’t quite buy the story—the “friend” was more of an acquaintance with a recent incarceration that involved theft. I have a feeling she was sold for his profit. I tried to get him to at least pay me for her but he ghosted me, never to be seen again. 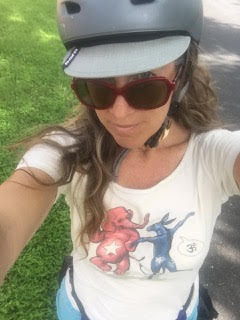 Fuji Cross Trek was next. She was lighter and more upright than DB. She could easily sail me from Uptown to the West Loop to Andersonville in a day. She got me to the 6 a.m. yoga classes I was teaching on Clark and Balmoral from where I was living on Racine and Adams in no time. I loved her the way a gearhead loves a hotrod. I peppered her with stickers of local community gardens and my favorite coffee roasteries. She had a bumper sticker that said something about peace. The fix-it crew from our favorite mechanics at Uptown Bikes on Broadway under the Wilson L would let me know that they’d seen her parked downtown or other places around the city. She stood out. I rode her until she fell apart and there was no fixing her.
I ordered a Felt Verza City 3, a hybrid, from Iron Cycles on Montrose. She was chocolate brown and sleek, with no fenders or rack so I could keep her light. When I got to the store to pick her up, they told me they had accidentally ordered me the fanciest version of this bike— the golden colored City 1 with the burnt caramel leather seat. Since it was their error, they decided to be angels and gave it to me without an upcharge. This baby was the Mercedes of all bikes to me. She gleamed with elegance. I hopped on and was a little scared to have such a fancy object in the city. As I rode through Ravenswood Manor on my way home a man called out “nice bike!” and I turned to wave, proudly. I was somehow not surprised to see the man’s thick head of dark hair as he watered the flowers in front of his classic Chicago blonde brick home. It was Blago. Yes, I had arrived.
Sometimes I’d return to her after an errand or a movie, surprised to see her $1500 frame still securely locked up and waiting for me. More than once a person or two or three would be ogling her as I walked up. They’d crouch down to get a better look. They’d ask about the disc brakes and internal gear hub, which I didn’t know much about, and I’d collude with their delight because it was fun. They’d walk away plotting their next big purchase. She came out to Texas with me and is currently snugly locked on the porch of the tiny house I rent. She’s looking forward to hitting flat Chicago streets again one day.

Posted by Neil Steinberg at 5:29 AM