"This is how they operate."


Over a year ago, I wrote about "targeted individuals"—people who are convinced that they are being followed, harassed, experimented upon by shadowy forces: coordinated teams of strangers, satellites, shadowy government forces. You might think that the idea that passing aircraft are watching you is crazy. They do not.
Since then, I have received regular emails from such individuals. Some mistake my soft tone as sympathy, and share their situations. Others assume I'm vastly fascinated with the topic and load me with information. Some detect my skepticism and object that they are being wronged.
Then there is this email, received Wednesday, which expresses all of that, and more. I'm sharing it, through the miracle of cut-and-paste technology. I'm not expecting you to read the entire thing. I certainly didn't, and in that case it is the first thing I've posted here without actually reading it all, for reasons that will become clear if, as I did, you try to do exactly that. I imagine that you'll start with good intentions, and at one point skim, then abandon the effort.
An actual caustic hard ass would just shrug and move on. Alas, that's only a pose with me. I thought carefully about my reply. Sometimes I write back with a version of Prof. LaPorte's stinging question: "What is it about you that makes a congress of agencies want to keep tabs on you?" They never answer. This time I wrote something heartfelt, designed to help. Naturally, I never heard back so I assume the effort was wasted. But I did try to help her in the best way I knew how, and I think that counts for something.
I'll shield her name, for her sake. LC writes: 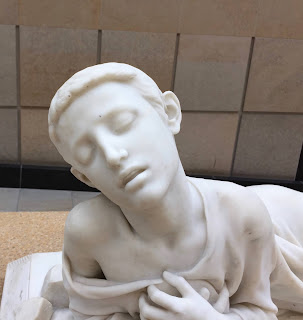 Later this morning, I'm visiting someone I think of as my "alcohol guy"—a counselor who specializes in addiction. I've been visiting him regularly for 15 years, not due to any crisis, but the way a person goes to the gym, to stay in shape and healthy. Going to see a mental health professional is not a sign of reduced sanity; in fact, like exercise, it is a necessary habit of the determinedly stable. I mention this personal detail to you, a stranger, to illustrate that there is no shame in seeking professional help, or talking to a counselor. If you're looking for someone to care about your very complicated situation, I would consider doing that rather than flinging your situation at journalists and demanding they care. It isn't that I don't care, I do, and I am illustrating that care by taking the time to point out the path you need to take if you want to soothe your distress. It is not easy; true solutions seldom are. But you are the one who needs to care about yourself, and to manifest that care by seeking trained help. Thank you for writing.