A short history of occasional poetry 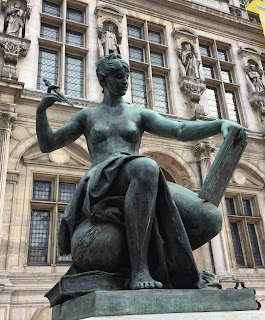 My treatise Sunday on another columnist got out of hand—every time I read it, the thing got even longer—and this is perhaps worse. I grow prolix in confinement. Today's effort started as a few sentences trimmed out of my column on the inauguration and the Star Spangled Banner. The problem, I think, is a stab at thoroughness. I tried to include ALL the inaugural poets. And more. Plus the subject. If you are arguing something is mundane, you need illustration, but then you end up with a catalogue of mundanity.
So apologies in advance for beating you into submission with this. And if you want to skip it, I not only understand, but approve and encourage.
Though maybe you are housebound and need to kill some time. Or maybe this isn't as bad as I think it is. Anyway, too late now. Grabbing a machete and cutting it back would take a stamina that I just don't have at the moment. Running on fumes. Or maybe Inauguration Day was six days ago and the hard, cold slog ahead is starting to sink in.
The composition of a poem to mark a great occasion is an ancient tradition, probably what got poetry going in the first place. Stretching back to pre-literate times when verse really was the only way to carry on the particulars of an event into the future. "The Iliad" could be considered such a poem, assuming the Trojan War actually occurred, which it may have.
The genre slides quickly downhill from there. In later centuries, what has been known as "occasional poetry" tends to be a fairly dubious catalogue, reeking of the overwrought, like Alfred, Lord Tennyson's "The Charge of the Light Brigade," published six weeks after the Battle of Balaclava in 1854.

The most jarring example of a poet knocked off the rails while trying to capture history is "O Captain, My Captain," which intellectually I know was written by Walt Whitman, but really feels like Longfellow. Inspired by the assassination of Abraham Lincoln, whom Whitman was proud to nod at as they rode past each other in wartime Washington, D.C., the rebel is kneecapped by emotion, at his overwrought Victorian worst:

But O heart! heart! heart!
O the bleeding drops of red,
Where on the deck my Captain lies,
Fallen cold and dead.

It would take 50 years for  decent war poetry to appear, such as Wilfred Owen's "Dulce et Decorum Est."
Even more fraught is when a poem is not just inspired by a contemporary event, but paid for, as a commission, to mark an occasion, giving the fatal stamp of official approval to what is supposed to be a spontaneous and heartfelt expression of honest emotion, nudging it toward work-for-hire PR.
The first poet to read at a presidential inauguration was Robert Frost, a fact often mentioned by journalists last week, every last one oblivious to the fact that the poem he composed for Kennedy was singsong shit. It clatters like a tray of dropped stainless steel flatware, and the first three lines will serve:

Read it out loud for the full effect.
In his defense, Frost was 86, and thankfully God Almighty Himself interceded at that point, blinding Frost with sunlight so he couldn't read his freshly-minted opus, and after an agonizing muttering eternity when the whole thing teetered on disaster, Frost recovered by switching to "The Gift Outright," a far better poem he knew by heart.
Not that occasional poems can't rise to the occasion, occasionally. Gwendolyn Brooks' poem written for the dedication of Chicago's Picasso sculpture in 1968 stands up well, particularly considering she thought the statue looked stupid.
It begins:

Does man love Art? Man visits Art, but squirms.
Art hurts. Art urges voyages--
and it is easier to stay at home,
the nice beer ready.
In commonrooms
we belch, or sniff, or scratch.
Are raw.

"Art hurts." That should be a book title. One has to wonder what Mayor Richard J. Daley, on the dais, made of that. There are also more than a few treatises to be written on the tendency over the past half century for Black female poets—never male—to be called upon to solemnize a public occasion by white politicians who wouldn't dream of inviting them to dinner. Maybe some deeper, unrecognized yearning toward truth sparks the assignment, but the truth can only be considered when rendered into poetry and delivered by a woman. We'll know our country has made actual progress when somebody like Terrence Hayes delivers the inaugural poem. I hope observing this isn't interpreted as diminishing female poets—careers have been scuttled for less. I'm not. I'm just pointing out a tendency.
The near fiasco of Frost's reading might have been why nobody tried it again for 32 years, until Bill Clinton tapped Maya Angelou, whose "On the Pulse of the Morning" is more honored than recalled. To listen to it today, with its talking rock, tree, river, and long lists of ethnicities is catch a glimpse of where liberalism goes astray. Maybe the stanzas where all those types come together as one mighty nation got cut, for brevity, and its wisdom is of the shallowed sort:

History, despite its wrenching pain, cannot be unlived
but if faced with courage need not be lived again.

I'd say it isn't lived again however it's faced, but that's just me. Then again, the poem was acclaimed at the time, so maybe the message here is the short shelf life of such works. Composed to mark the moment, they lose their footing when the moment passes, as all moments must.
But Maya Angelou, grim, regal, rebuking, is Grace Jones snarling in a cage at Studio 54 compared to Miller Williams—you ever hear of him? Me neither—the poet whose reading at Clinton's second inauguration was so inconsequential it simply evaporates from history, the words deracinated and drained.

We mean to be the people
We meant to be
To keep on going
Where we meant to go
But how do we fashion the future?
Who can say how?

Do this for six minutes and you have an inaugural poem.
Barack Obama's first inaugural in 2009 featured "Praise Song for the Day," written and read by Elizabeth Alexander. It is, in essence, a paean to the normal, and all the possibilities contained within. The poem has its moments.

In today’s sharp sparkle, this winter air,
any thing can be made, any sentence begun.
On the brink, on the brim, on the cusp

Not a bad poem. But it ends up manifesting rather than celebrating ordinariness, further undercut by her halting, choppy delivery. No matter the poem, you gotta sell it. Alexander's ... one ... word ... after ... another delivery is a reminder why many people don't like poetry. Watch her reading, and Amanda Gorman's accomplishment last Wednesday will be driven home.
Richard Blanco was even more somnambulant reading "One Today" in 2013, if such a thing were possible. He was identified as the first gay poet to read at an inauguration, and the son of Cuban immigrants. Those groups no doubt cherish their participation trophy. His poem wouldn't seem extraordinary read by any high school senior at any talent show anywhere.
"Thank the work of our hands ... weaving steel into bridges ... finishing one more report for the boss."
Donald Trump, needless to say, did not have a poet read at his inauguration. He may never have heard a poem in his life that didn't begin, "There was a young woman from Sussex..." Still, the Scotsman published a poem written in honor of his inauguration by Joseph Charles McEnzie:

He welcomes the worthy, but guards our frontier,
Lest a murderous horde, for whom hell is the norm,
Should threaten our lives and our nation deform.

That hasn't aged well, has it?
Blanco was the youngest, at 44, which makes Gorman, exactly half his age. I probably shouldn't say anything about her; the nation has already rocked with praise for her delivery of "The Hill We Climb" for days. She began:

When day comes
We ask ourselves
Where can we find light in this everlasting shade?

In you, young lady, for starters. Gorman soon slips into the lightest rap cadence, "The dawn was ours before we knew it, somehow we do it" with more memorable, powerful phrases in her six minutes than in all the previous inaugural poems put together. "A nation that isn't broken, simply unfinished," and "To compose a country committed to all cultures, colors, characters and conditions of man" sailing boldly over the gender shoals that wreck so many. "Victorious, not because we will never again know defeat, but because we will never again sow division" (okay, the truth is, we'll never stop sowing. But as another poet, Robert Browning, noted, "a man's reach should exceed his grasp or what's a heaven for?")
The heart:

The hill we climb if only we dare it
Being American is more than a pride we inherit
It's the past we step into
and how we repair it
We've seen a force that would shatter our nation rather than share it
would destroy our country if it meant delaying democracy.
And this effort very nearly succeeded.

I don't want to quote the whole poem. Maybe it feels right because it was written three weeks ago. Or maybe it'll last the test of time.
My wife said two things afterward, the first undeniable.
"She's beautiful," she said, and I gratefully nodded. I hadn't wanted to say. It's creepy when the guy says it.
Second:
"Maybe she'll do for poetry what 'The Queen's Gambit' did for chess."
That's an intriguing thought, though poetry is already a big deal, if you ask me, especially in cities. Gorman is the America's Young Poet Laureate, and I'd say she has a future as bright as her canary yellow Prada jacket, although it'll be hard to top the international flash of last week. Then again T.S. Eliot, another Harvard poet, was 27 when "The Love Song of J. Alfred Prufrock" appeared in Poetry Magazine, and he still had "The Waste Land" and "Four Quartets" ahead of him. Life is very long, as Eliot said, if you do it right.